Godzilla Through the Years - Part 5

After Godzilla successfully made a return to form in Return of Godzilla, Toho began making plans for sequels. This movie was only just the beginning of what was to be called the "Heisei" series. 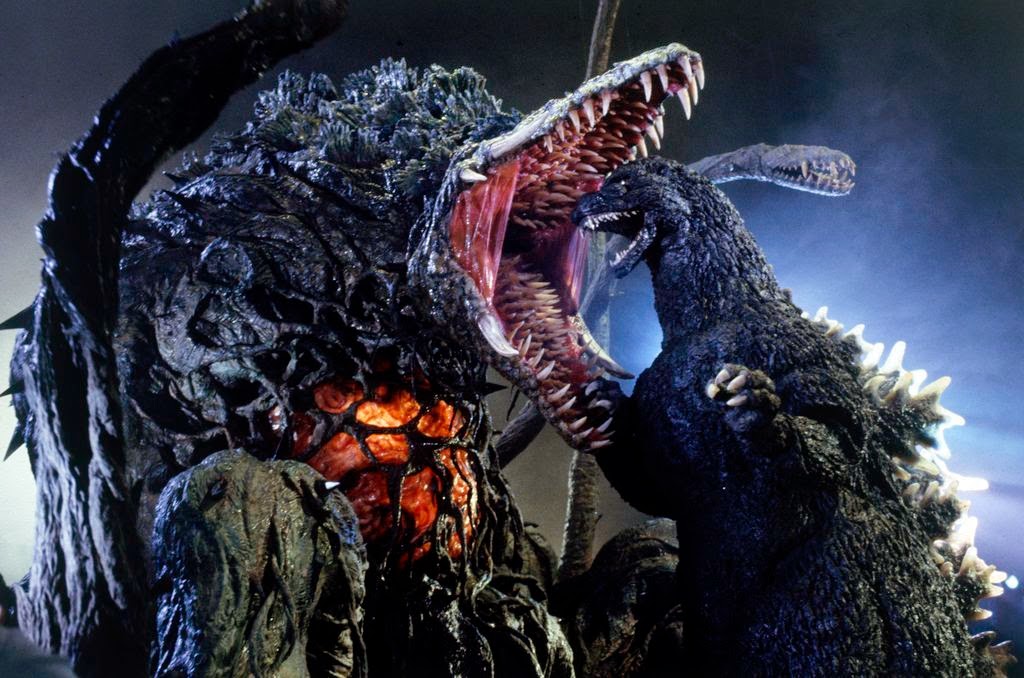 Following the successful resurrection of the Godzilla franchise, Toho made preparations for a sequel, preferably with another giant monster for Godzilla to do battle with.  Perhaps unsure of exactly what direction to take the new series, the studio turned to its fans, hosting a story contest.  From around 5,000 international entries the winner was finally declared to be a plot created by a Japanese dentist!

Taking place immediately after the events of the previous film, the story begins with mercenaries battling to collect genetic material belonging to Godzilla that has been left behind following the monster's battle with the Super X.  The organic matter (called Godzilla Cells or G Cells) is given to a renegade scientist tasked with creating a mutated grain that is able to grow in the desert.  Unfortunately, a terrorist attack destroys his laboratory and kills the scientist's daughter in the process.

The story jumps ahead five years to reveal that the scientist has combined some of his daughters DNA with a rosebush and, later in the film, some Godzilla Cells.  The result is a gigantic rose that develops in a Japanese lake.  It is discovered by a psychic that the soul of the scientist's daughter is a part of the mutated plant.  Meanwhile, Godzilla is set free from his volcanic prison by terrorists, after doing battle with the newly improved super weapon, Super X2, Godzilla apparently destroys the giant rose. 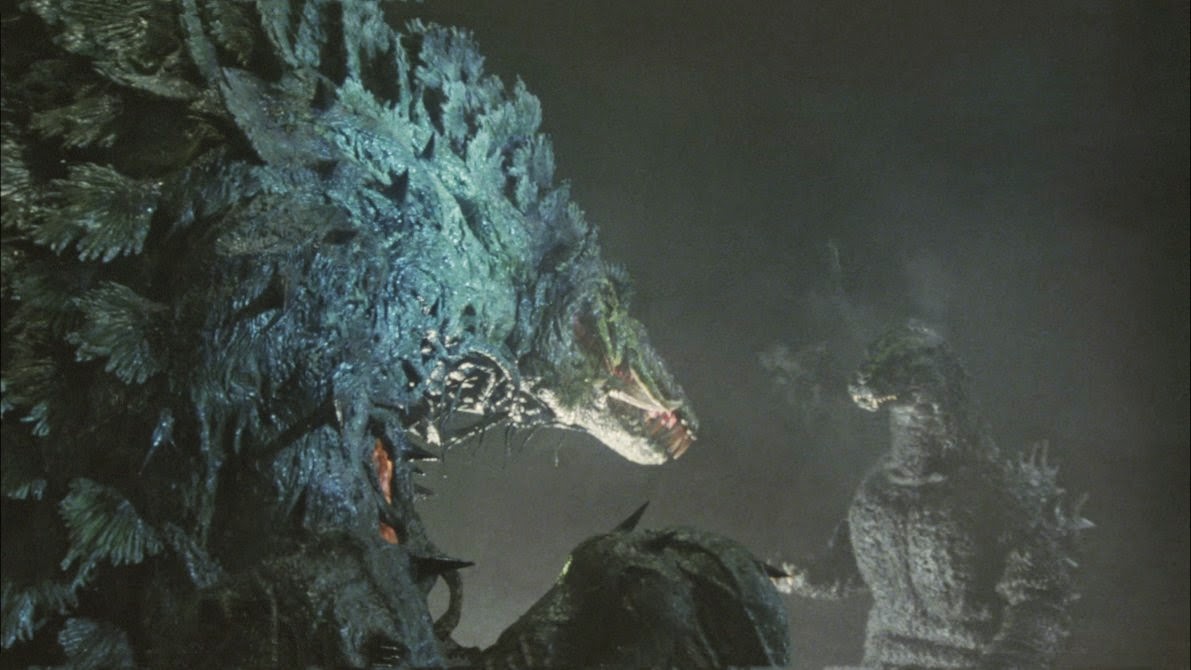 The plant reappears later in a new, horrifyingly titanic form, looking like a hybrid of a Venus Fly-Trap and Godzilla himself.  This new monster dwarfs Godzilla and easily entangles him in its vine-like tentacles.  Through a combination of the psychic's power, the Super X2, and the plant monster, Biollante, Godzilla is defeated, but lives to wreak havoc another day.  Following the battle, Biollante dissolves into the atmosphere, forming the shape of a rosebud in space before disappearing altogether.

Godzilla vs. Biollante is a unique film, haunting and almost beautiful at times.  Aside from the original 1954 film and the final movie of the Heisei series, this is one of the only Godzilla movie that elicits some tears. 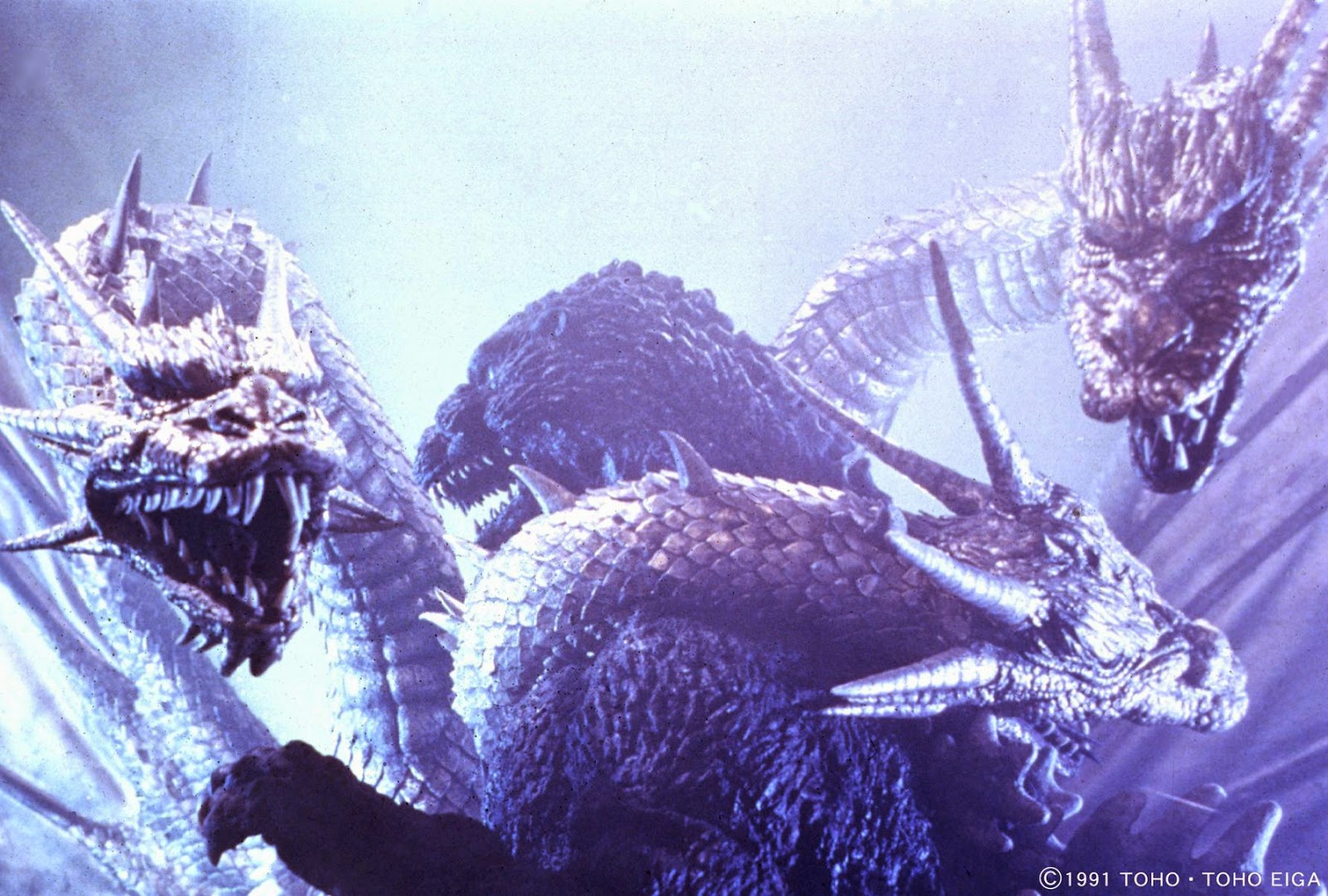 It was only a matter of time before Godzilla's classic foes from the original series were revamped themselves.  For the next film in the series, Godzilla's arch-nemesis King Ghidorah reappeared to do battle.

This film introduced many fantastic elements to the series.  The story features time-travelling extraterrestrials called Futurians warn the Japanese government of an impending disaster in which Godzilla totally destroys Japan.  The aliens convince the Japanese leadership to send a strike force with them back in time to and island in the South Pacific during World War II to kill the somehow still surviving dinosaur that would eventually mutate into Godzilla thanks to nuclear testing.  The time-travelers are successful and return to the present where Godzilla has never existed. 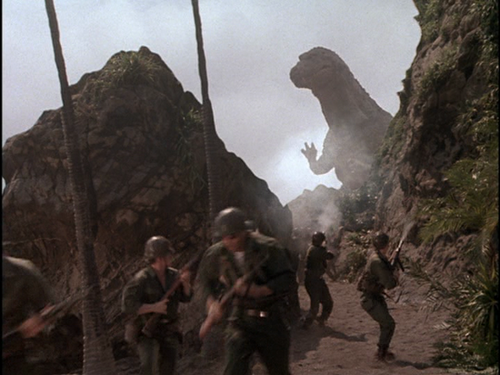 However, the aliens had nefarious intentions.  Before traveling back to the present, they left behind creatures called Dorats that end up mutating (in Godzilla's place) into King Ghidorah.  This monster is controlled by the Futurians who threaten to unleash its wrath upon the nation it unless Japan surrenders.  The situation looks hopeless, until Godzilla reappears, bigger and badder than ever.  It turns out that the dinosaur in World War II was revived and mutated by the radiation of a nuclear submarine that crashed near the island it was found on.  This new Godzilla is more than a match for King Ghidorah, blowing off its middle head and apparently killing the alien monster.  Godzilla then destroys the Futurians and their ship and then promptly begins laying waste to Tokyo.

Fortunately, one of the Futurians who had previously defected to the side of humanity survives and retrieves the body of King Ghidorah, takes it back to the future, and creates a cyborg called Mecha-King Ghidorah to subdue Godzilla. 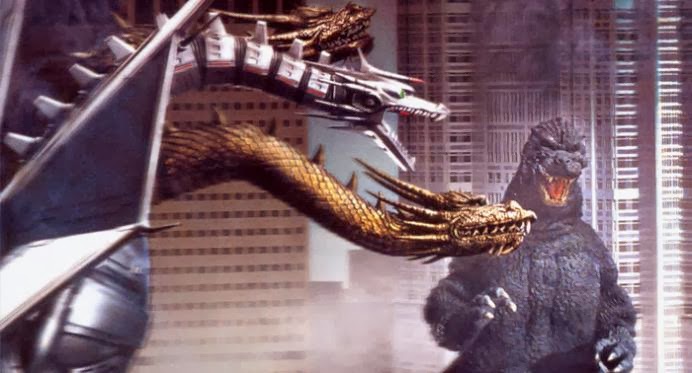 As you can see, this movie featured a very convoluted plot...  Even for a movie featuring a giant, radioactive lizard.  However, I remember the special effects being top-notch with some awesome battle sequences.

It is notable that during this film Godzilla's size changed once more during Godzilla vs. King Ghidorah. As Godzilla was "reborn" toward the end of the film, the monster grew to be about 100 meters (328 feet), the largest version up to this point.

This wasn't the only modification made to Godzilla.  Behind the scenes, the suits used for this and subsequent movies in the series were being made to be more and more sophisticated.  New suits featured dorsal fins that lit up and fully animatronic heads that allowed the monsters to have more dynamic expressions. 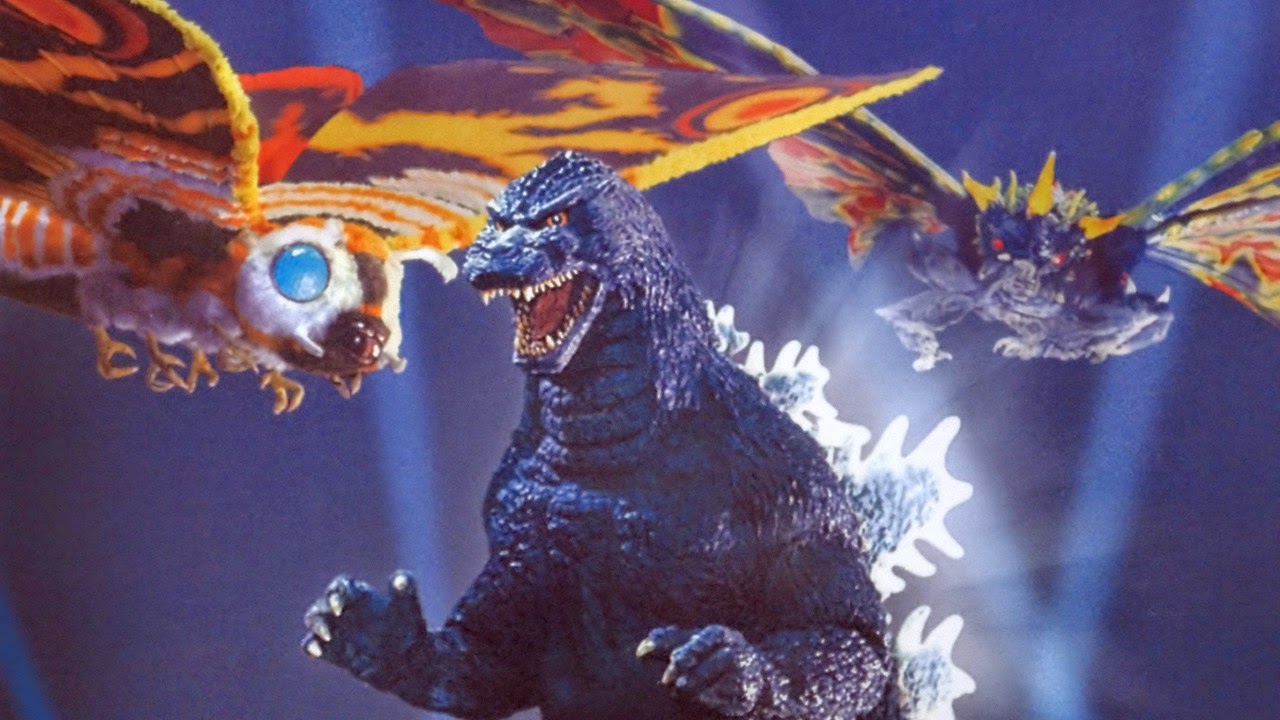 The next movie in the series saw the return of another Godzilla foe from the previous series, Mothra.  However, the giant moth also brings along company in the form of a sort of "evil twin", the malevolent Battra.  Despite trying to destroy each other early in the film, the two metamorphosing creatures team up to defeat Godzilla. 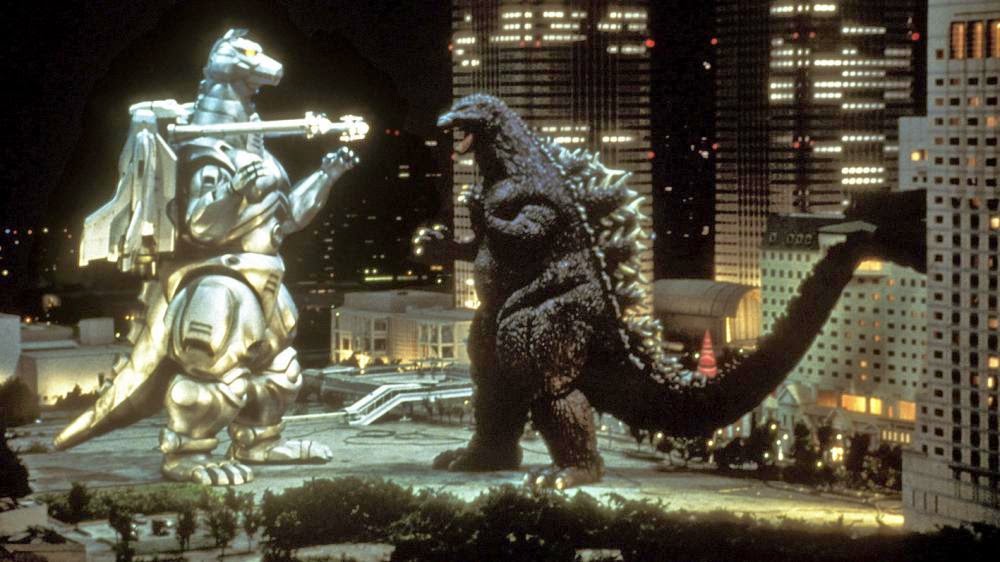 This film sees an international organization formed with the goal of neutralizing the threat of Godzilla and any other giant monster that would threaten mankind.  Utilizing technology from the remains of Mecha-King Ghidorah, two new super-weapons are formed:  A gigantic jet called Garuda and MechaGodzilla, a robotic Godzilla controlled by human pilots.

This movie also saw the return of another familiar monster, Rodan.  Inexplicably, Rodan appears to guard a giant egg which hatches and turning out to be an infant Godzilla!  Eventually, MechaGodzilla proves to be no match for Godzilla and the monster and his newborn "son" swim off into the ocean. 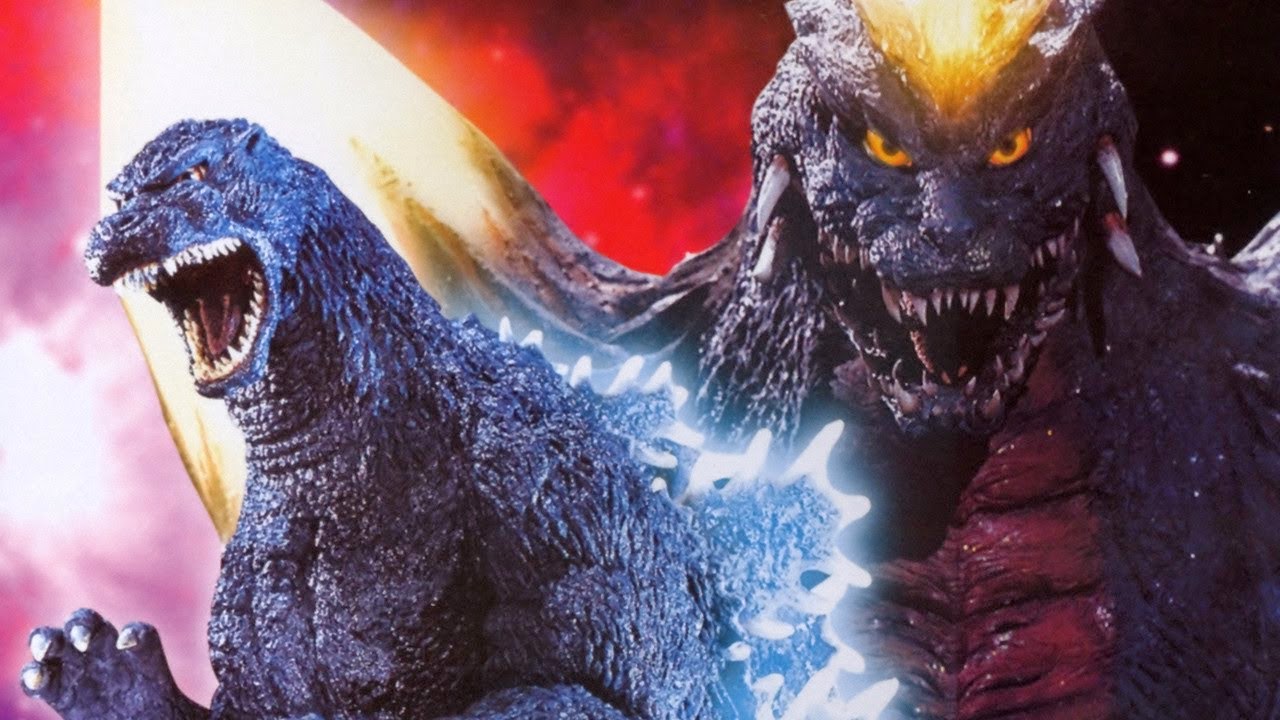 Godzilla vs. SpaceGodzilla featured a brand new foe for Godzilla to face, an extraterrestrial doppelganger!  SpaceGodzilla is apparently created when cells from Biollante were sucked into a black hole and mutated with a crystalline life form.  SpaceGodzilla is much more powerful than previous foes and it ends up taking the combined force of the Godzilla and a new robot ally, MOGUERA to vanquish the alien threat. 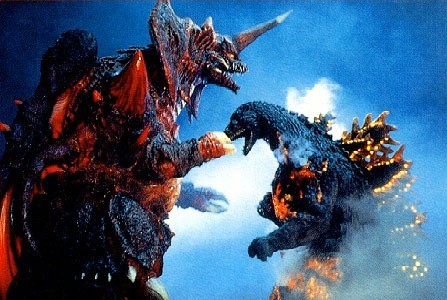 The end of the Heisei series was marked by Godzilla vs. Destroyah.  This film was released shortly after the 40th anniversary of the original film and Toho decided to present something special for the next film:  Godzilla's demise!

In this film Godzilla is on the verge of a atomic meltdown that will ultimately result in his death, the reasoning being that Godzilla's heart, which is something akin to a nuclear reactor, is beginning to malfunction and breakdown.  This is reflected by a new suit which glows red as steam seeps from Godzilla's skin.

The burning Godzilla lashes out against Hong Kong at the beginning of this movie, laying waste to the city.  Meanwhile, it is discovered that areas of a landfill near Tokyo Bay contain soil with no oxygen.  It is discovered that his is where the Godzilla from 1954 was destroyed by the Oxygen Destroyer.  A series of mutations develop in the oxygen-depleted soil, huge crustacean-like creatures that eventually merge into a single monster called Destroyah. 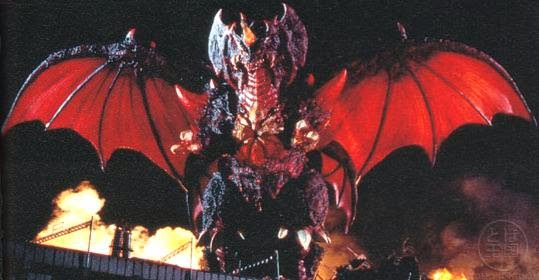 Destroyah kills Godzilla's "son" and nearly destroys Godzilla himself.  With the aid of Super-X III, Godzilla is ultimately able to defeat his adversary.  But it is too late for Godzilla.  The monster finally succumbs to its rapidly deteriorating condition and disintegrates soon after the battle.

Scientists monitoring the rising radiation level are shocked to find that it suddenly plummets.  As the smoke clears, a familiar roar is heard.  Godzilla's "son" is rejuvenated radiation.  Godzilla lives again! 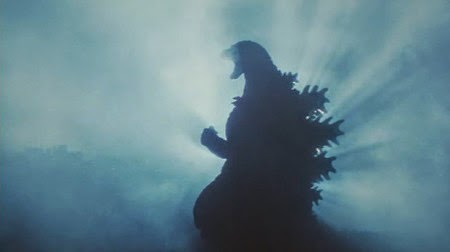 Despite the knowledge that Godzilla is a fictional character, it's difficult as a fan to watch him die.  I'll admit to once again needing a tissue box while watch this film.

However, as before, this was not to be the end of Godzilla...

Posted by Jonathan Brinson at 12:02 AM