Godzilla Through The Years - Part 3 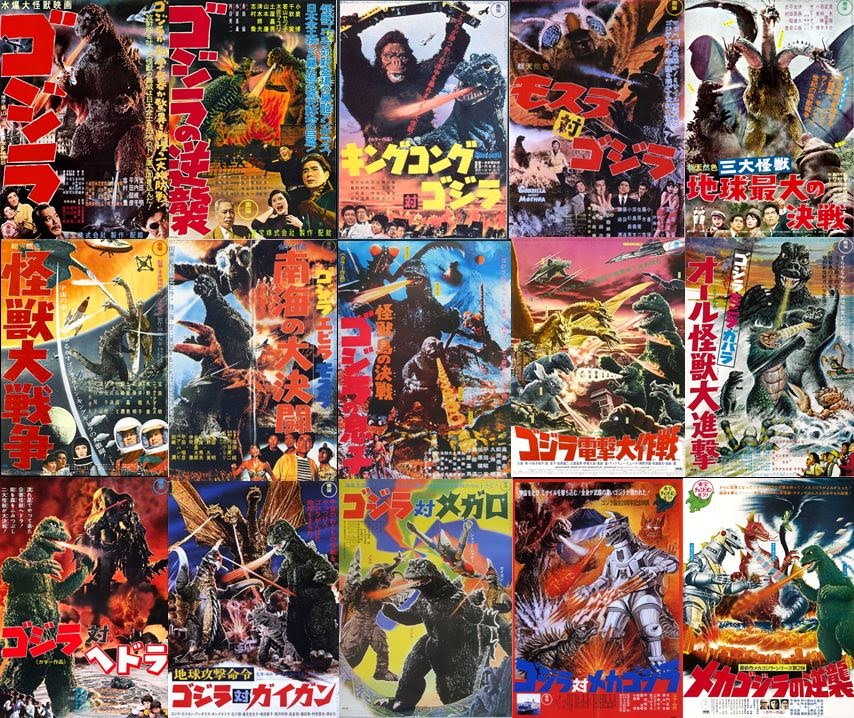 With the first Godzilla being a success, Toho rushed a sequel into production.  Over the course of the next 20 years, the original movie ended up having 14 sequels.  Yes, Godzilla was destroyed in the first film, but you just can't keep a good monster down! 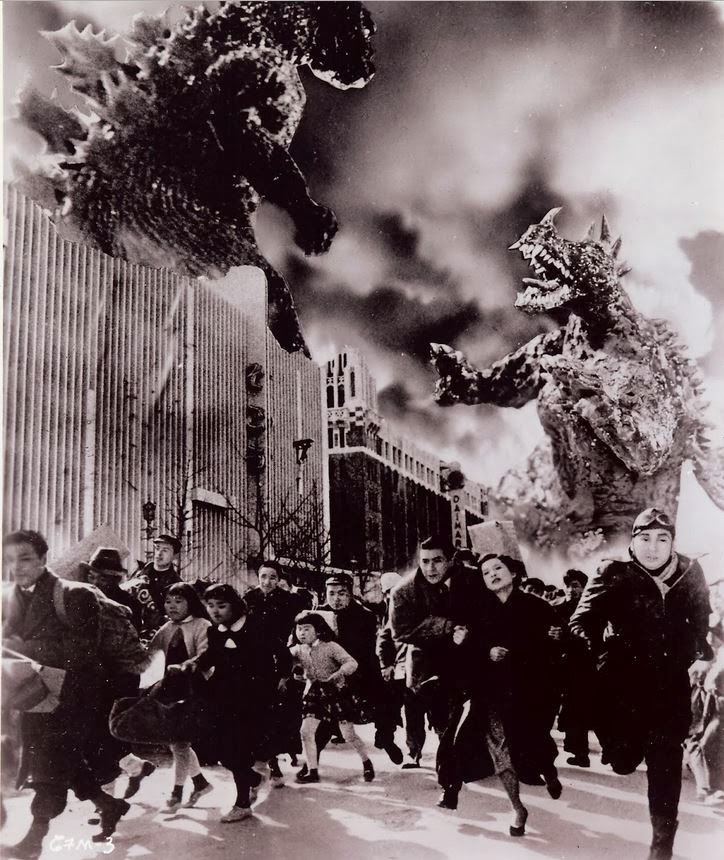 Released just 6 months after the original with a new creative team, Godzilla Raids Again (1955) finds Godzilla battling another gigantic beast for the first time.  Anguirus was an armored, ankylosaur-type monster who viciously fought Godzilla in a sort of turf war unleashing more mass destruction on Japan.  The film must not have been well-received as it was several years before Godzilla reappeared on the big screen.

For no apparent reason, this movie was renamed Gigantis the Fire Monster for its American release. 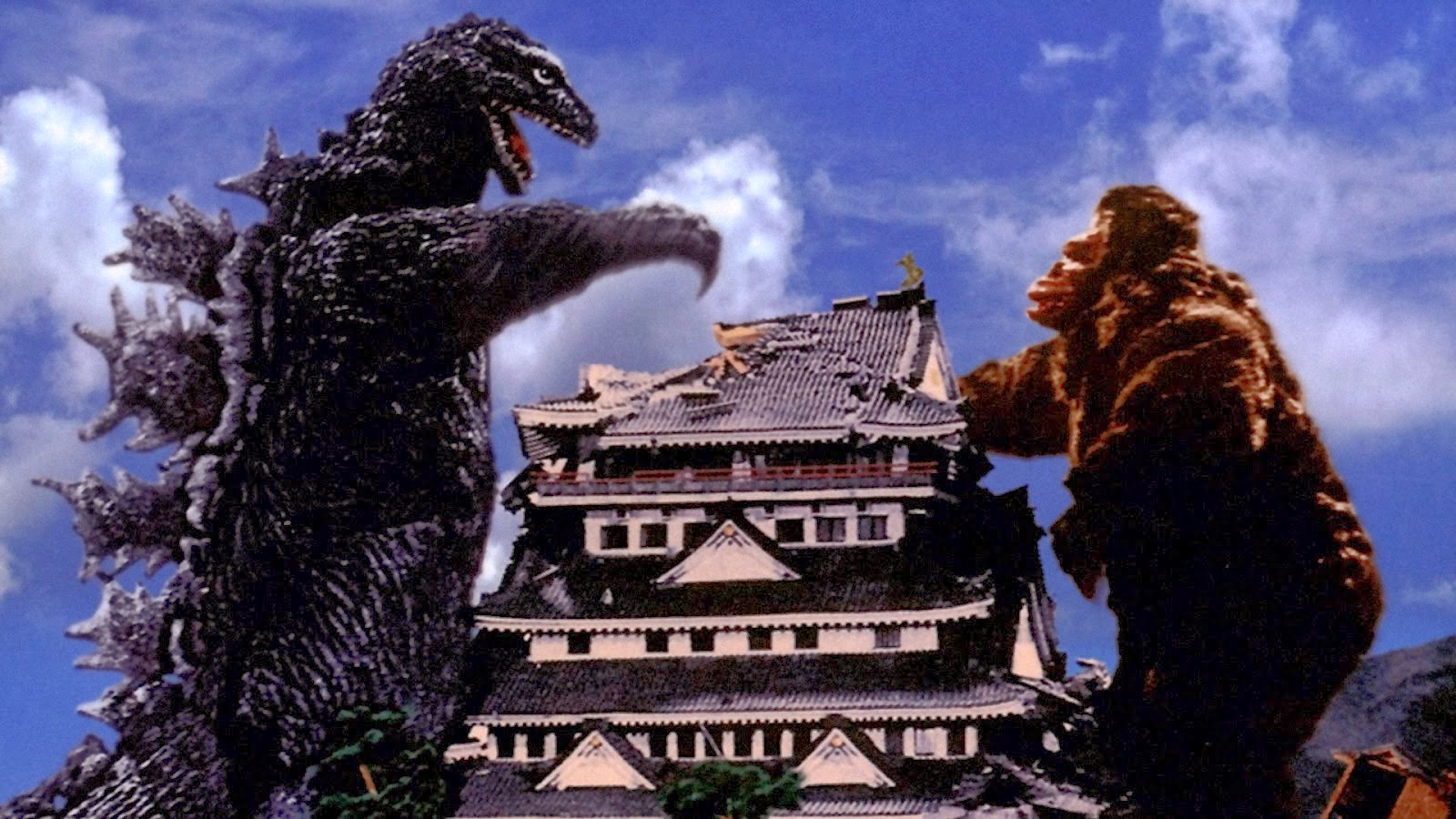 Released in 1962, King Kong vs. Godzilla featured a showdown between the King of the Monsters and his American counterpart...  In color no less!

Apparently, this film's origin owes a debt to stop-motion pioneer Willis O'Brien the artist responsible for bringing King Kong to life in the original 1933 classic!  O'Brien had attempted to develop a King Kong sequel which would be called King Kong vs. Frankenstein.  This film was to feature the giant gorilla against a giant hybrid monster created by the mad doctor.  As awesome as that sounds, the concept for the film did not generate any interest until a producer brought it before Toho.  The studio, looking to create another Godzilla sequel took the idea and went in a different direction.

The creative team of the original film reunited for this movie which depicted Godzilla and King Kong's battle with a kinetic energy and ferocity not seen up to this point.  To make the battle more even, King Kong's size was boosted to match Godzilla's and the ape was given electrical powers.  Admittedly, the action was over-the-top and many of the monsters' moves emulated those of sumo-wrestlers, but fans of giant monsters still consider this effort a classic...  myself included! 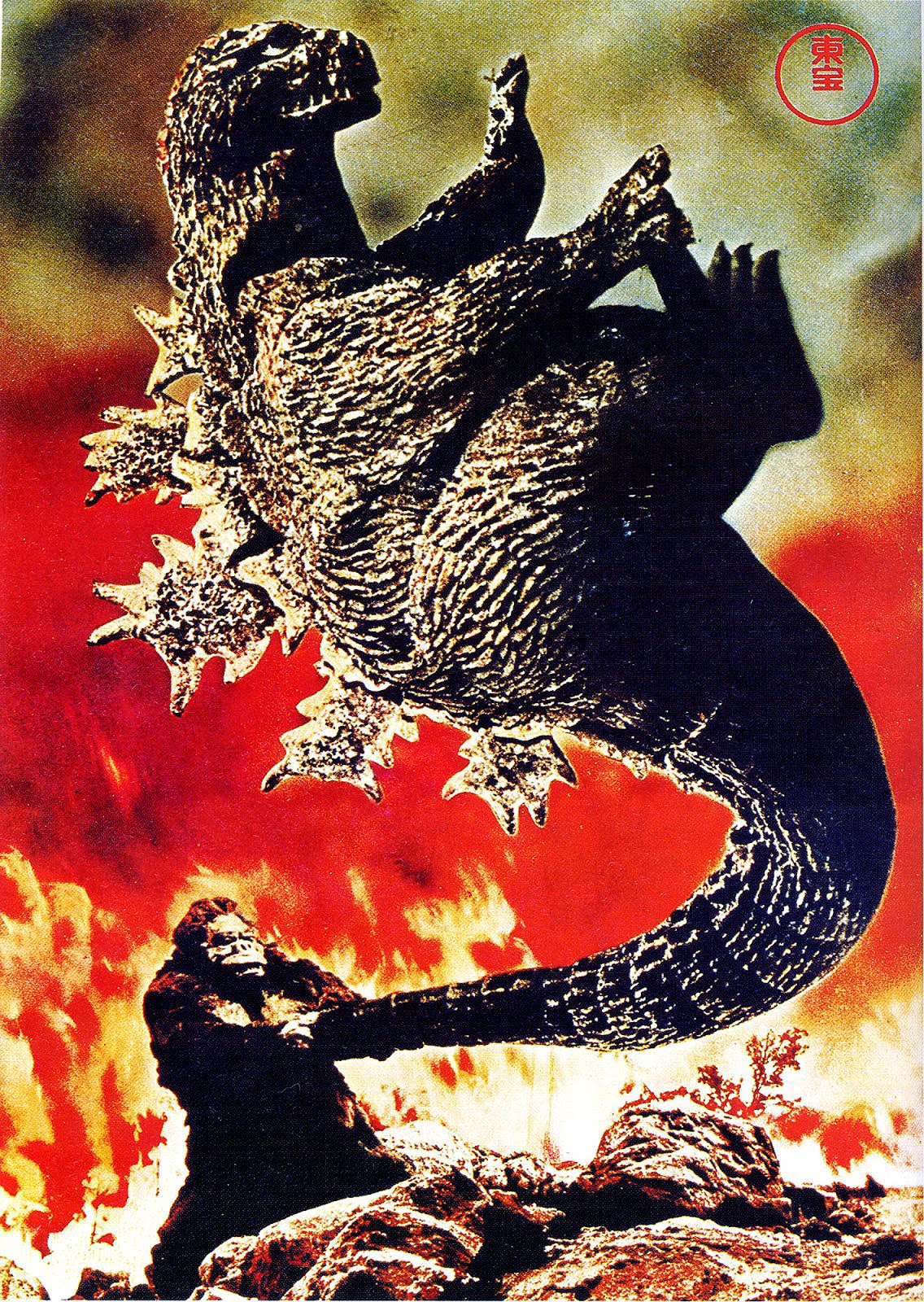 A myth surrounding this film that persists to this day is that two endings were created, one for American audiences which had Kong winning and a Japanese version with Godzilla claiming victory.  In truth, there were no alternate scenes filmed and the movie ends ambiguously with both monsters toppling off a cliff and into the ocean, followed by a shot of Kong swimming toward the horizon.

Regardless of the film's ending, this movie signaled a new beginning for Godzilla, rejuvenating his popularity on an international level.  King Kong vs. Godzilla was wildly successful and guaranteed that more Godzilla films would be churned out for years to come. 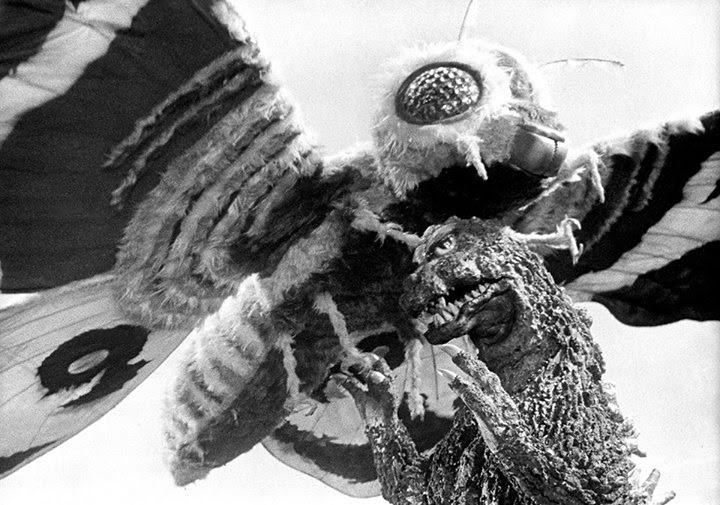 Mothra vs. Godzilla (1964) pitted Godzilla against another original Toho created monster.  Mothra is a mystical, over-sized moth creature merely trying to protect its offspring - a gigantic egg - from greedy humans and later, Godzilla.  Once more the original creative team returned again, creating yet another classic in the genre.

For this movie, the design of Godzilla's suit was changed again, this time being slimmed down, but with the tail being lengthened and the face being given a more malevolent look since Godzilla was once again playing the role of the villain.  This design is regarded as being one of the best in the entire series.

This film is perhaps most notable because it is the first to interpret Godzilla as an unstoppable "force of nature".  Through the course of the movie the military implements several elaborate plans to thwart Godzilla's advance, but the final plan is basically to just get out of the way.  This idea of Godzilla being like a hurricane or earthquake would be reappear in later films when a new series would attempt to return the radioactive monster to its roots.

Ghidorah, The Three-Headed Monster and Invasion of the Astro-Monster 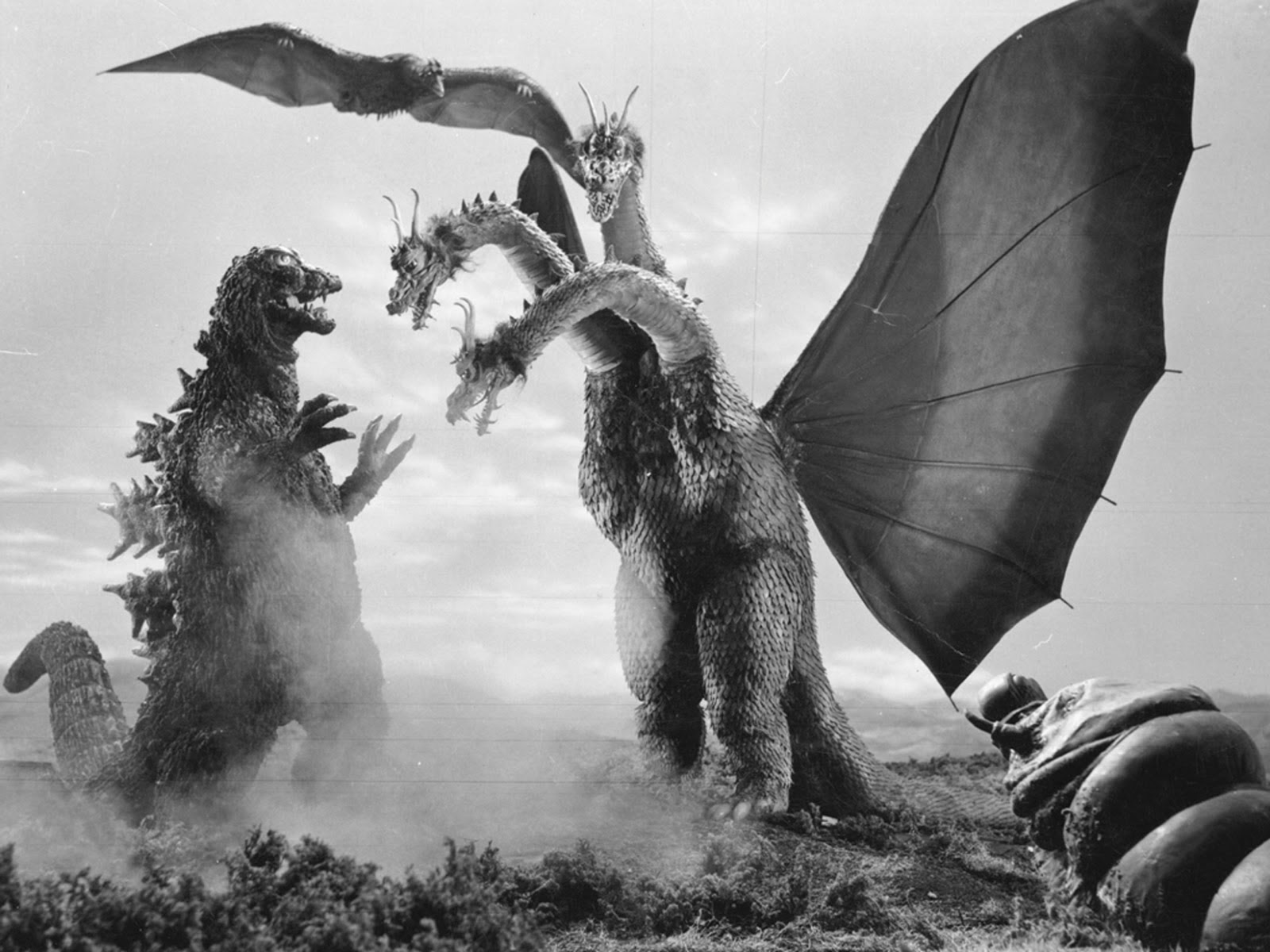 Both Ghidorah, the Three-Headed Monster (1964) and the next film in the series, Invasion of the Astro-Monster (1965) featured a gigantic, golden multi-headed winged dragon, King Ghidorah.  Ghidorah serves as a sort of weapon of mass destruction for the alien races hoping to conquer Earth in these films. The extraterrestrial beast proves to be too much to handle for Mothra and Rodan (another original Toho monster, a giant pterodactyl capable of supersonic speeds).  Godzilla appears to aid the other monsters, eventually resulting in the space creature's defeat...  Until the next film which found Godzilla and Rodan being transported to the aliens' home-world, Planet X to do battle once more. 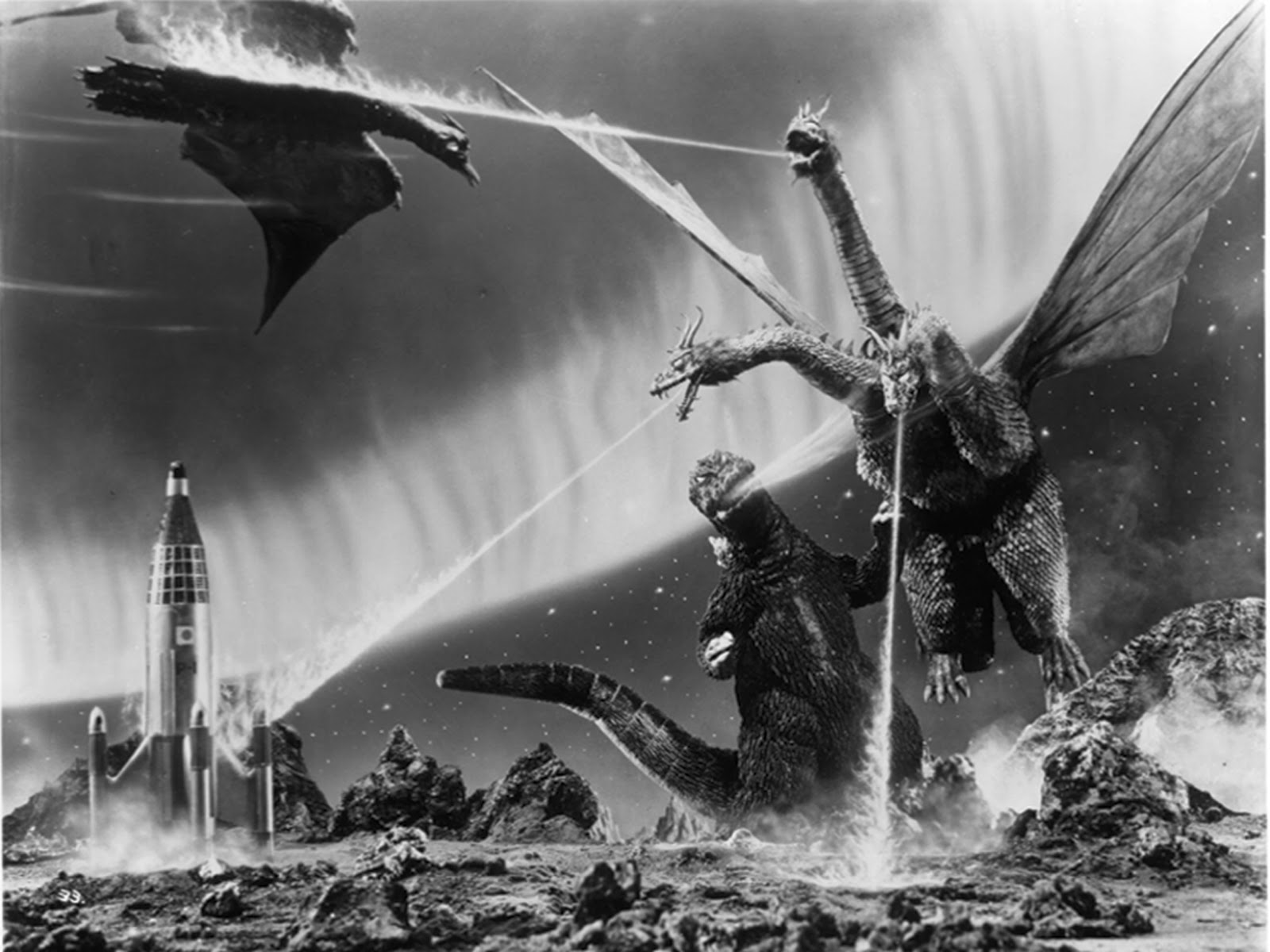 These movies mark the beginning of a shift in Godzilla's character from being less of a threat to mankind to becoming a sort of defender of Earth.  The filmmakers recognized that the audience was getting younger and wanted to appeal to that particular demographic.  To reflect Godzilla's more "heroic" role, yet another suit was designed, featuring larger eyes and smaller dorsal fins.

Ebirah, Horror of the Deep 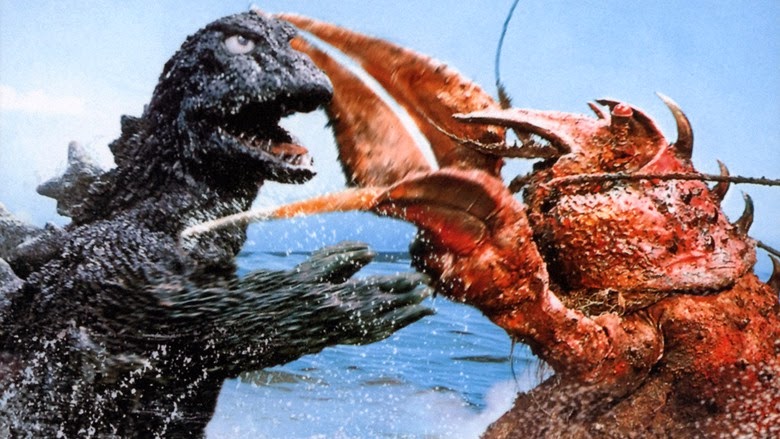 This movie featured a giant lobster-like creature being controlled by a heavily armed military organization that operates a slave labor camp.  Inevitably, of course, the giant crab ends up battling Godzilla.

The plot is nonsensical (even for a giant monster movie), probably due in part to the fact that the film was meant to feature King Kong, not Godzilla.  Not only does Godzilla fight the titular giant crustacean, but also a renegade fleet of jet fighters and a giant buzzard which makes an inexplicable appearance.  Oh, and Mothra shows up too!

Personally, however, I find this movie is just all-around fun.  I have many memories of watching it on VHS with my Godzilla toys scattered all about the living room floor.

Son of Godzilla and All Monsters Attack 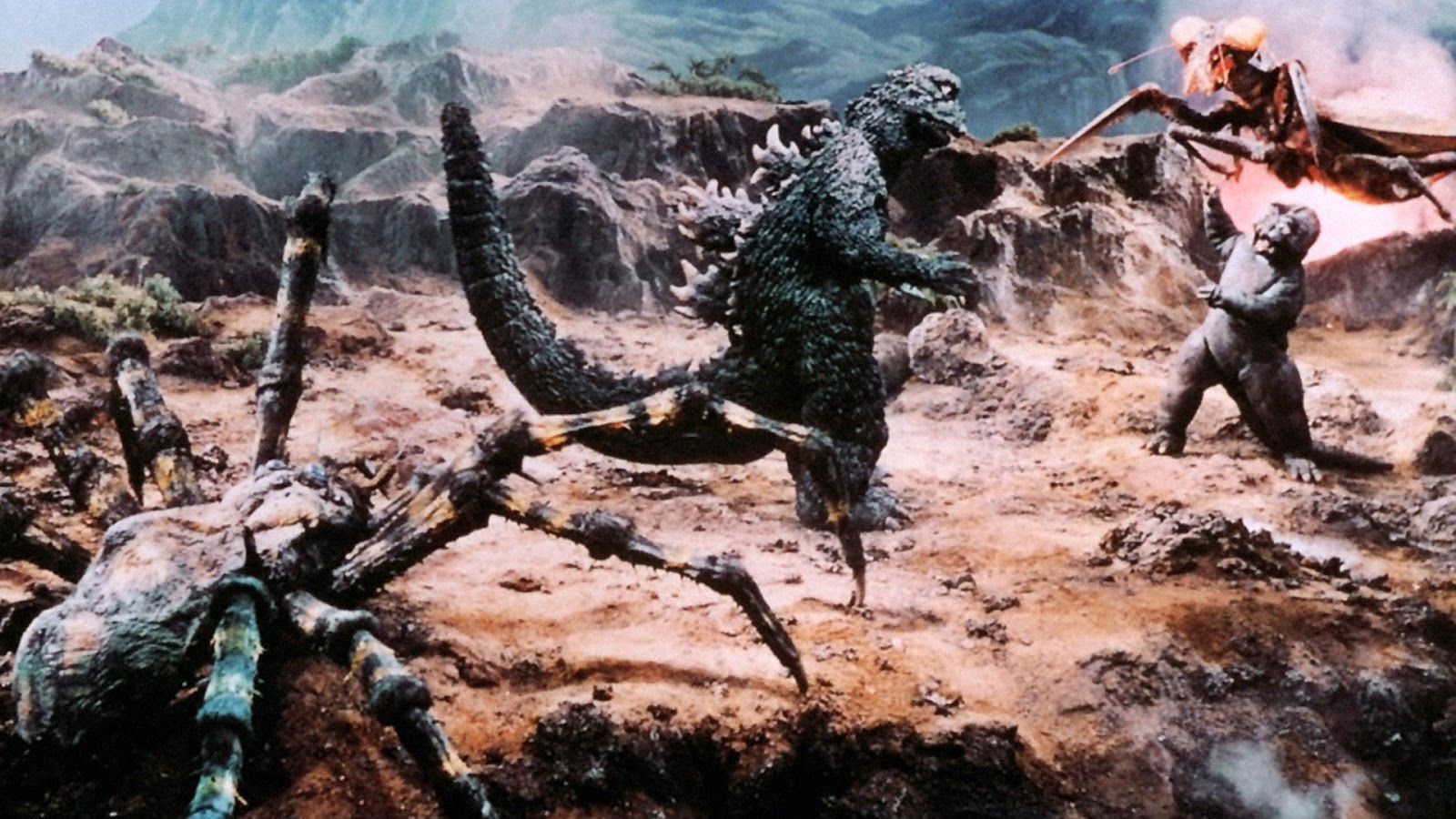 Perhaps Godzilla's most "kid-friendly" appearances are found in Son of Godzilla (1967) and All Monsters Attack (1969), which makes sense seeing that these films are blatantly geared toward children.

In Son of Godzilla, Godzilla takes on the role of gentle father-figure to a recently hatched monster resembling Barney the purple dinosaur.  The action takes place on an island, being bombarded by a series of weather-control experiments.  Of course, the experiments go horribly awry, mutating the island's wildlife, so Godzilla and his adopted son (dubbed Minilla) end up doing battle against giant mantises (Kamacuras) and a huge spider (Kumonga). 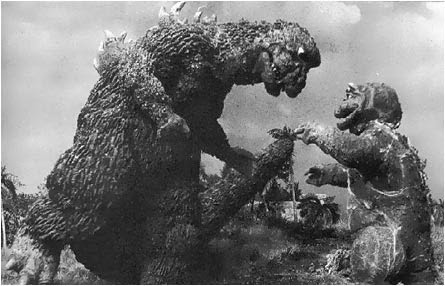 Godzilla's design was changed again for this film.  This time he was given an over-sized head with big eyes and a shorter snout to appear even less malevolent.

All Monsters Attack is particularly interesting because the main protagonist is a lonely, bullied child who retreats into the fantasy realm of Monster Island which is inhabited by Godzilla, Minilla and a host of other monsters.  Life lessons abound as the kid befriends Minilla who is also being bullied, but is being trained to fight by his dad, Godzilla.  Minilla, who at the beginning of the movie can only blow smoke rings eventually learns to blow atomic fire (when Godzilla stomps on his tail) and defeats his bully, a giant monster (which sports, appropriately enough, a spiky mohawk).  This is turn inspires the kid to foil some bank robbers and stand up to his own bullies. 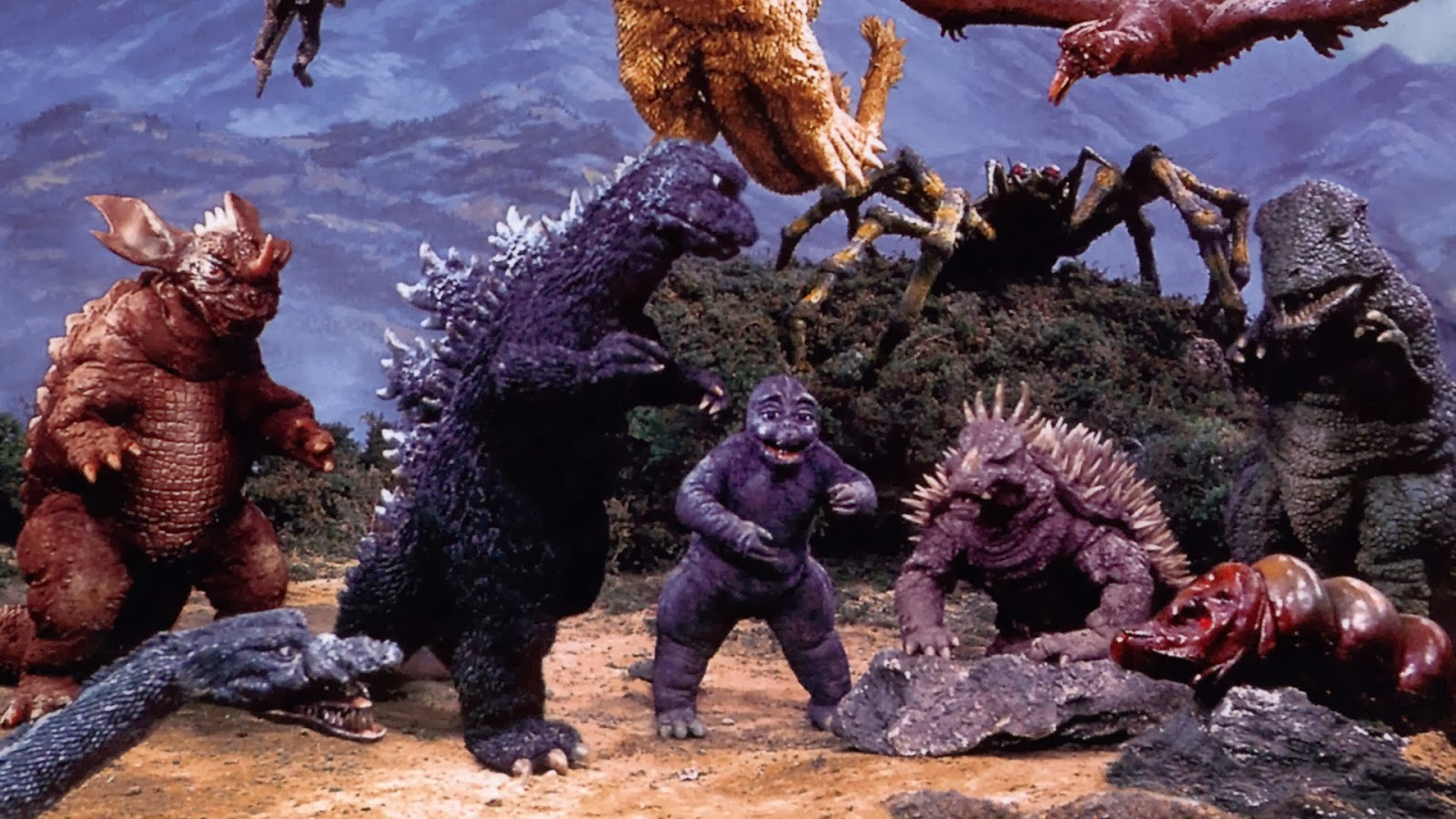 Taking place in the futuristic world of 1999, Destroy All Monsters (1968) initially depicts all of the monsters in a somewhat peaceful state, having been corralled onto an "inescapable" island bordered by force fields.  But, wouldn't you know it... Another evil race of aliens sets the monsters free and, using mind control, unleash them on Earth's major cities.  Eventually the monsters regain their free will and end up teaming up to take down the alien's enforcer, King Ghidorah.

The original creative team returned once again for this ultimate, monstrous epic.  This film was so ambitious that it was granted a much bigger budget to facilitate what promised to be a spectacle on a gargantuan scale. The movie features 11 different monsters (sometimes simultaneously) from numerous Toho films all together for a colossal mash-up.

Destroy All Monsters is an awesome feat of special effect wizardry.  The monsters were to attack cities around the globe, including Moscow, Paris, New York City, and, of course, Tokyo and ultimately engage in a climactic all-out battle through the course of the film.  Each scene of chaotic destruction had to be carefully coordinated using every trick Toho had refined through the years, including suitimation, puppetry, miniature work, and pyrotechnics. 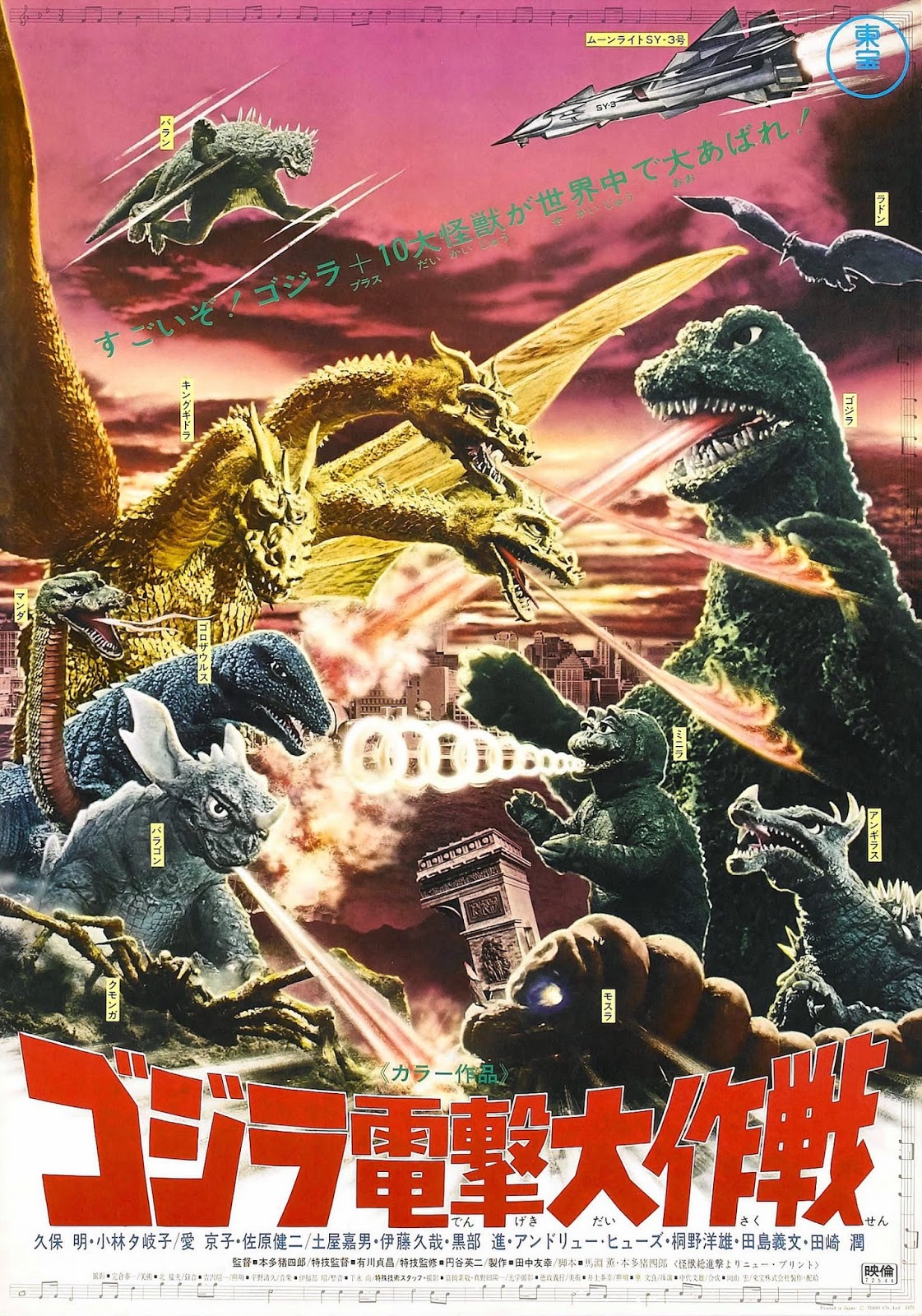 The movie ended up pushing Toho's special effects team to its limits, but the outcome is nothing short of spectacular for fans of monster mayhem and remains a standout of the original series. 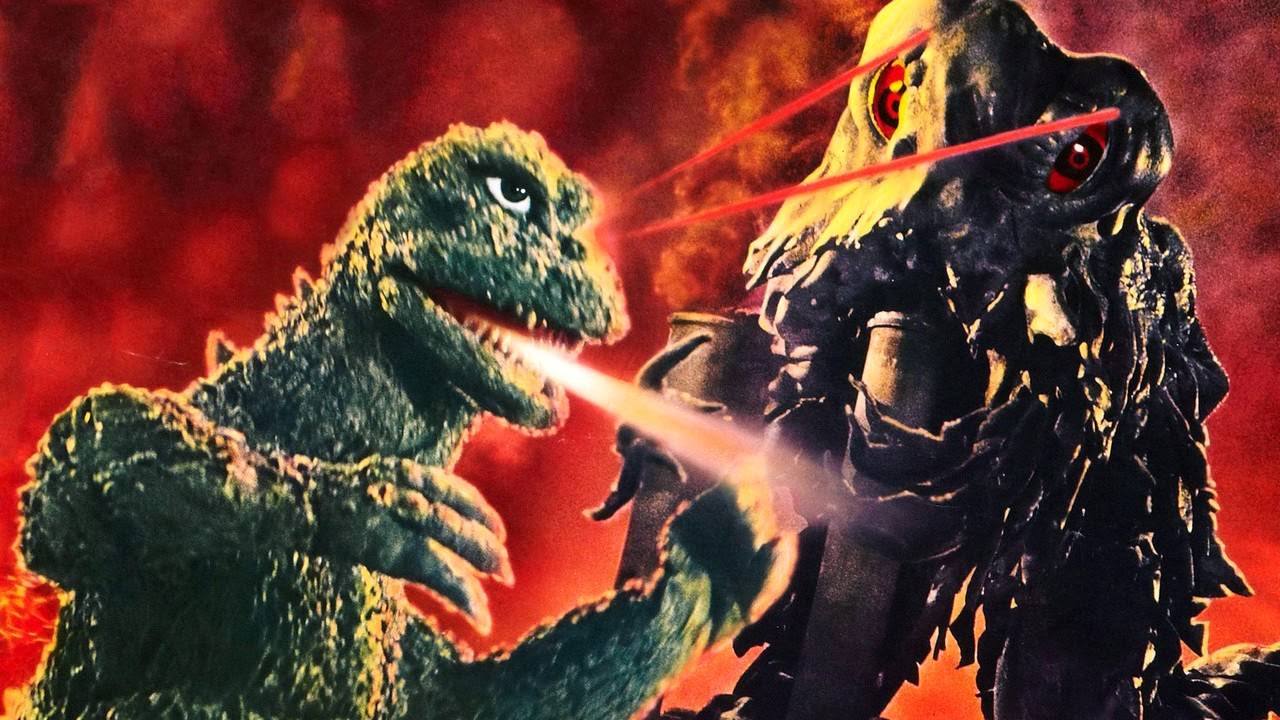 Godzilla vs. Hedorah (1971) is a very unique entry in the series.  The movie conveys a not-so-subtle ecological message as Godzilla takes on a smog monster birthed from industrial waste.  Hedorah mutates through several distinct forms in a sort of bizarre metamorphosis through the course of the movie.  It starts out as a collection of tadpole-like creatures that morph together to create a single disc-shaped monster that inhales smog from smokestacks until it grows to a size to rival Godzilla, all while spewing deadly toxic fumes.

The movie is very ominous in tone and features some scenes of gruesome human casualties, the like of which had not been seen since the original 1954 movie.

But this movie is not a totally grim affair, it is infamous for featuring animated sequences, split-screen montages, and the revelation that Godzilla can apparently fly by way of using his atomic breath as a means of jet propulsion... 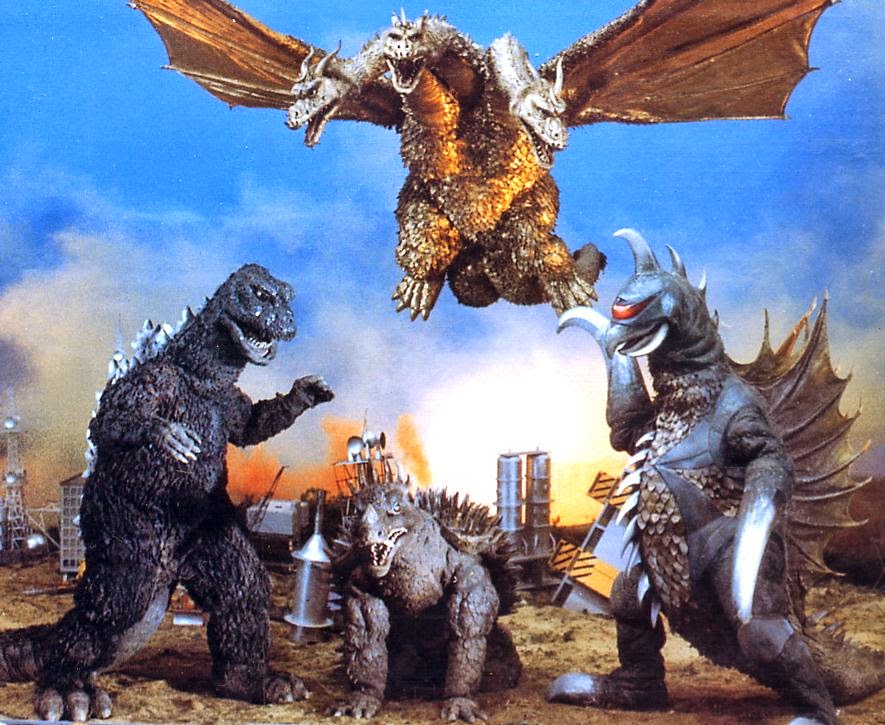 The plot of Godzilla vs. Gigan (1972) is plot centered once again on alien invasion, this time spearheaded by a species of roach-like aliens seeking out a less polluted planet.  This movie introduces one of my favorite monsters, the giant cyborg creature, Gigan.   This monster boasts an impressive arsenal of two large talons in place of arms, a buzz-saw in its chest, and a laser beam that emits from its single red eye.

As if this new menace wasn't enough, King Ghidorah also makes an appearance to wreak additional havoc, while Godzilla receives some assistance from his former foe turned ally, Anguirus.

Like the previous film, this movie shows off some interesting creative choices:  Godzilla and Anguirus speak to each other via comic book word balloons at one point! 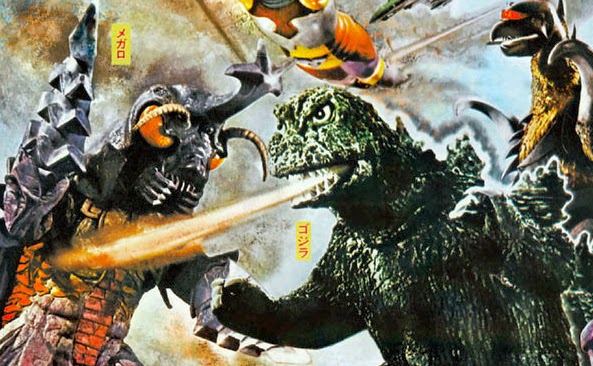 With Godzilla vs. Megalon (1973), the series became even more outlandish.  In this movie, the people of the underwater kingdom akin to Atlantis unleash a giant beetle monster called Megalon.  Along with Gigan, (apparently on loan from the cockroach aliens of the previous film) the massive insect sets about destroying everything in its path. Godzilla teams up with a robot ally called Jet Jaguar to take down the two monsters.

At this time there were several popular Japanese television shows featuring robot superheroes fighting giant monsters. This entry in the Godzilla serie seems to have taken its cue from such shows with its ramped-up action and ridiculousness... 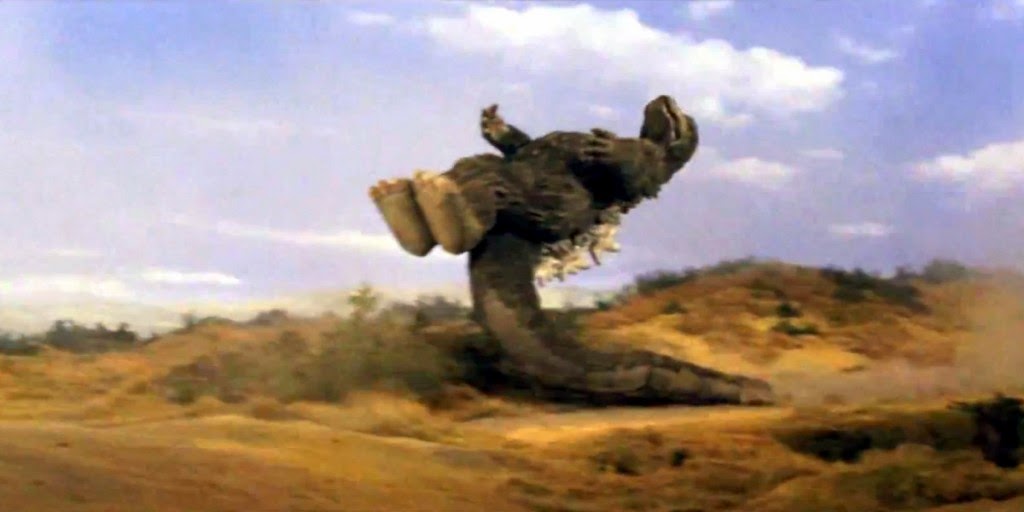 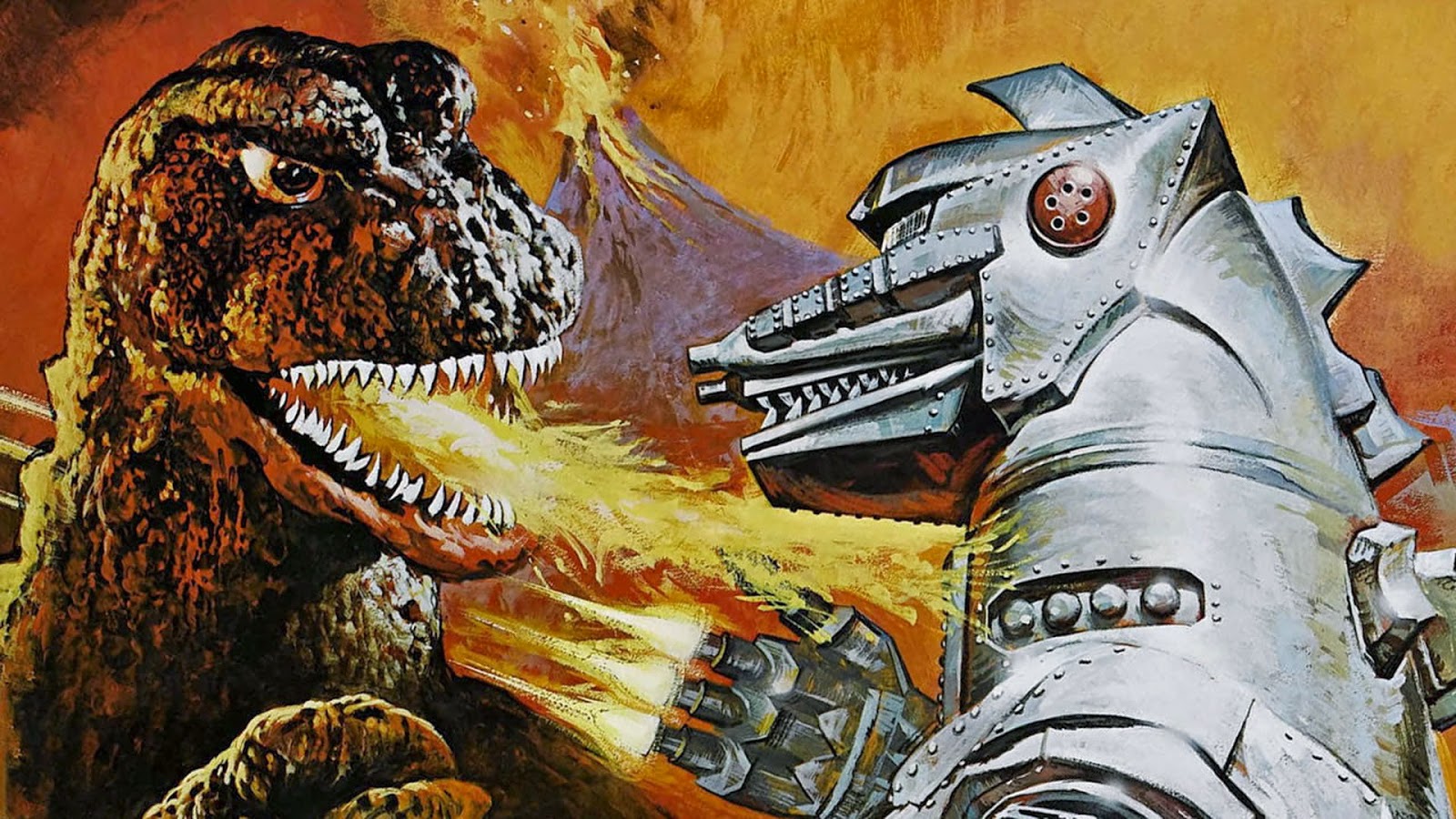 The beginning of Godzilla vs. Mechagodzilla (1974) appears to find Godzilla reverting to his old ways as the monster is seen once again laying waste to Japan.  Only after "Godzilla" brutally attacks his ally Anguirus is it revealed that it is actually a gigantic robot in disguise.  Godzilla seems to meet his match in the form of a mechanical doppelganger being controlled by aliens from a black hole who look like green apes.  With the help of a legendary monster who looks like a giant dog, King Caesar, Godzilla is able to defeat his technologically advanced adversary. 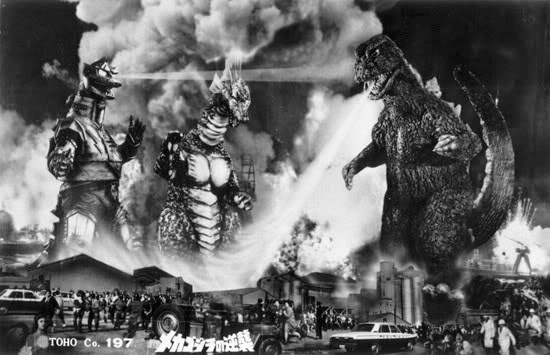 But Mechagodzilla is reconstructed in Terror of Mechagodzilla (1975) and is this time joined by a powerful amphibious monster called Titanosaurus.  Godzilla stands against this double threat alone and eventually emerges victorious once more.

Unfortunately, this would be the last Godzilla film for ten years.  It seems that Godzilla's popularity had waned, possibly due to over-saturation as Terror of Mechagodzilla was the fifth Godzilla movie in as many years.

But this wasn't the end of Godzilla...