Alfred Hitchcock Presents: Music to Be Murdered By 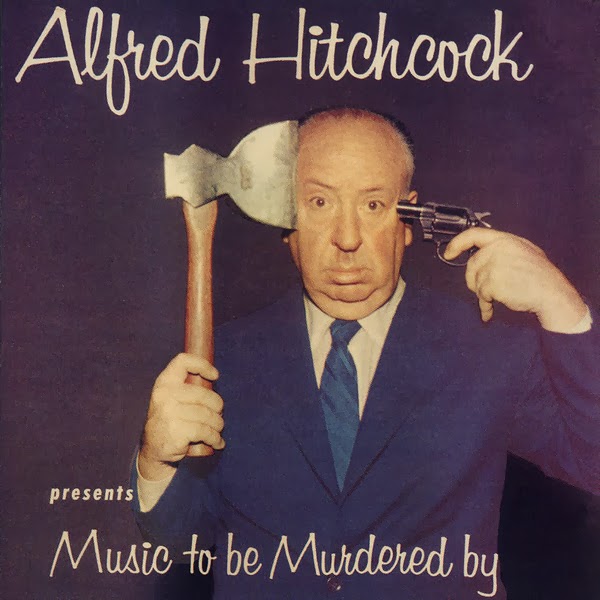 Alfred Hitchcock...  The "Master of Suspense".  As film director and producer he pioneered many film-making techniques that are still being emulated to this day, including shots that appear to be filmed from a first-person perspective, giving the audience an uncomfortable voyeuristic feeling.  Primarily working in the suspense, mystery, and thriller genre, Hitchcock developed a huge body of work through the course of his six decade career.  Many of his are still considered masterpieces by film critics and fans alike.  Just a few of his most famous films include:  The Lady Vanishes, Rope, Strangers on a Train, Dial M for Murder, Rear Window, The Trouble with Harry, The Man Who Knew Too Much, Vertigo, North by Northwest, Psycho, and The Birds.

Despite the majority of his work being in the movie-making business, Hitchcock also recognized the gaining popularity of television and embraced the medium.  He produced and hosted a series called Alfred Hitchcock Presents which made him even more of a recognizable cultural figure.

Apparently, at some point in the midst of all this, Hitchcock also found time to produce this record entitled Music To be Murdered By in 1958.  If you are expecting the harsh strings found in the Pscyho shower scene, this record is not for you, but you're missing out on some good stuff.  The music is wonderfully conducted by movie and television composer Jeff Alexander.  Most of the album might be considered easy listening lounge music, but there is an undertone of suspense and mystery that one would expect.  Hitchcock's trademark "gallows humor" is on full display as he introduces each piece of music.

From the liner notes:

The record in this envelope is called "Music To Be Murdered By" and is part of a campaign of mine to return to murder the dignity and charm it once had.  Today there are few good, honest murderers left.  Most of them are hoodlums or neurotic wrecks with no sense of style or form and certainly no interest in good music.  I realize there may be a few who whistle as they work but that is hardly the same thing.  This modern notion that all murders should be performed a capella simply has no historical basis.  You don't think Nero was fiddling for his own amusement, do you?  Certainly not.

These days a murder is amusing for the onlookers and the murderer but no one thinks of making things pleasant for the victim.  He may be a tiresome bore but he is still rather essential and is entitled to some consideration.  Music, I feel, will heighten his appreciation and make his own murder the truly ennobling experience it should be.

One warning:  My disembodied voice will be heard occasionally, but I promise not to sing.  After all, this record was designed to accompany murder, not to commit it.

I sincerely hope you enjoy "Music To Be Murdered By" and I trust that before your demise you have time to stagger out and busy some more albums for a few of your close enemies.

Posted by Jonathan Brinson at 10:13 AM