Godzilla Through The Years - Part 1

Past, Present, and Future...  Godzilla and Me

For as long as I can remember Godzilla has been one of my favorite movie monsters. So it goes without saying that I am eagerly anticipating the new American remake coming out later this year.  Seriously, I've watched the trailers probably 15-20 times each at full volume...  I'm pretty sure my long-suffering wife is growing weary of hearing that familiar roar.
When I was growing up dinosaurs were the best thing ever as far as I was concerned, so of course I was thrilled when my parents introduced me to Godzilla and his humanity-crushing contemporaries.  I remember countless afternoons watching reruns of the re-dubbed Japanese movies on TNT back in the days of their MonsterVision programming.


I simply couldn't get enough of that giant atomic fire-breathing lizard stomping all over Tokyo and laying the smack-down on anyone or anything foolish enough to cross him.  What child wouldn't want yearn to be something that big and powerful?  My cousins and I built, destroyed, and rebuilt miniature cities while fighting epic battles.  Later we tried to make our own films using models and blocks (and nearly set the garage on fire trying to get a little bit of extra realism using some old fireworks we weren't supposed to have).

I'll never forget my excitement when my dad took me to local video rental place and I discovered that they had a Godzilla NES game!  Sure, the game was overly confusing and unnecessarily difficult and I died countless times before even reaching the first boss battle, but it was worth it just to play as the big guy for just a few minutes.

In middle school I discovered that Toho was still making Godzilla movies.  I was disheartened to find that there were no plans to release these in the states and so I had to get my fix from bootleg VHS tapes that were being sold at a local electronics store.  Ah, the memories...

As I got older I began to realize the deeper meaning behind some of the films, in particular the original 1954 movie and the 1984 revival.  I came to find out that Godzilla was initially intended to be an allegory for nuclear warfare.  I found that to be deeply resonating and apparently I'm not the only one.  Certainly this is one of the many traits uniquely different about Godzilla that sets him apart from the other B-movie radioactive monsters the silver screen has witnessed come and go.  Godzilla has maintained longevity as a cultural mainstay throughout his 60 years on screen.  This monster's continued relevance cannot be overlooked!

Godzilla Through the Years

One would think that Godzilla is just a big dinosaur-like monster that has undergone little, if any change at all since his 1954 debut.  However, while the basic concept of the big atomic reptile of mass destruction has remained the same, the design and character of Godzilla has evolved quite a bit through the years whether is be through mere design, characterization, or underlying message. 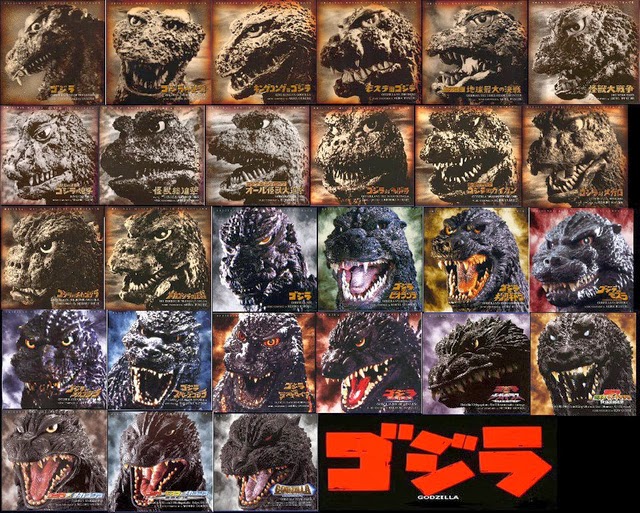 I thought I would share a simple post about Godzilla's cinematic history.  But I guess I got a little carried away...  I found that I just couldn't stop writing or looking for images and videos to add to the post and it just kept getting bigger and bigger.  I toyed with the idea of having a Godzilla-sized post (appropriate, right?) but I feared the thing wouldn't load fast enough (or at all) if I posted it all at once.

And so this will have to suffice for part 1 of a series of posts devoted to that giant mutant lizard of mass destruction...  Stay tuned for more!

Posted by Jonathan Brinson at 8:00 PM