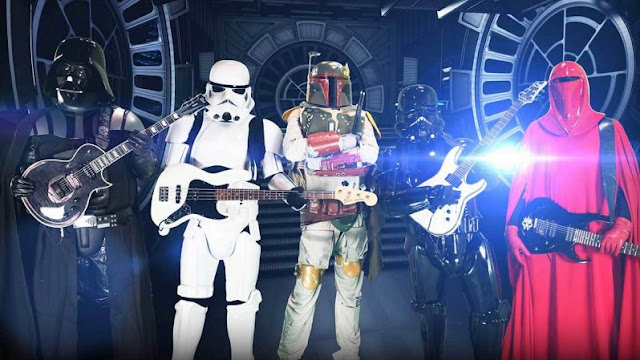 Yes, there is now Star Wars themed metal band. I shouldn't have to explain why this is awesome...  But I will anyway!


Not much is known about the group calling themselves Galactic Empire besides their allegiance to the Dark Side and affinity for heavy music.  The band specializes in covering John Williams' various themes from the Star Wars films which work surprisingly well as metal compositions.  The group is comprised of lead guitarist Dark Vader, Boba Sett on drums, Bass Commander on bass, and Shadow Ranger and Red Guard on guitar.  The group play their shows in-character while fully costumed.


Galactic Empire's self-titled first album is scheduled to be released on February 3rd.  You can pre-order the album here.
Posted by Jonathan Brinson at 8:25 PM