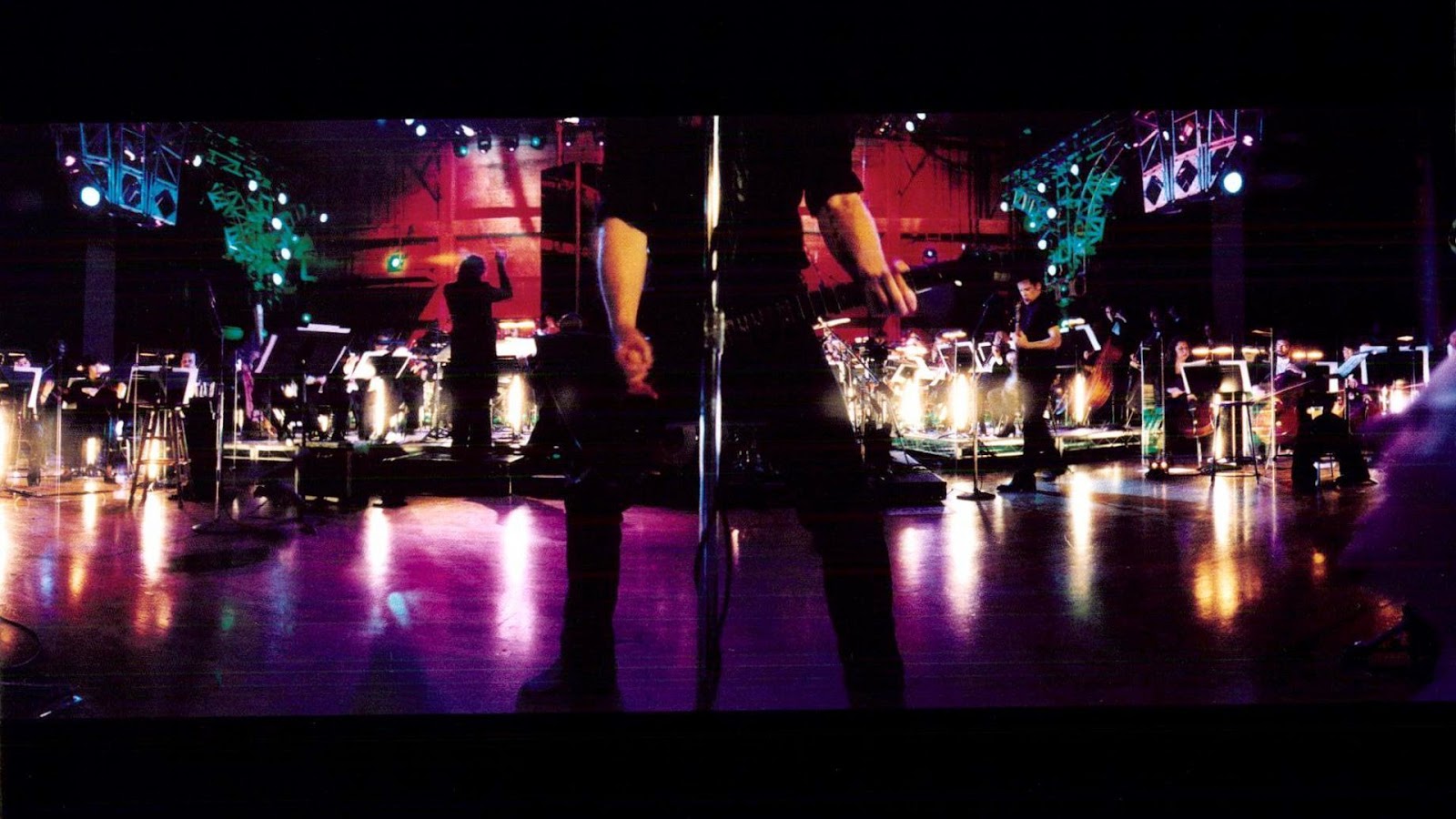 It was very early in high school that I was first exposed to the music of Metallica.  Surprisingly, I had never listened to any of their music until 1999 when they released their album S & M.  For me, personally, I can't think of a better introduction.

Up to that point I had listened to some Metal music, but it was still a genre I was warming up to.  My dad had exposed me to a wide variety of music growing up, but mainly Classic Rock.  The Beatles, Meat Loaf, Nazareth, Pink Floyd, and Queen were on constant rotation in our house.  While one could argue that these bands shared elements with Metal, my dad was convinced that Metal music was just too aggressively blaring to be called "real music".

But that all changed one night when PBS broadcasted the live performance of Metallica's S & M.

Metallica's S & M was a highly ambitious project which saw the popular Metal act performing live with the San Francisco Symphony Orchestra.  Conductor Michael Kamen approached the band with the idea of a live show combining Classical symphonic music with some of Metallica's material.  Metallica, which has never been a band afraid to take risks, was convinced enough to give it a shot.  The result is surprising blend of two seemingly incompatible genres and musical styles.

With neither entity overpowering one or the other, the band and the orchestra put forth a great effort and create a uniquely memorable listening experience.


From the liner notes:

Combining one of America's most powerful orchestras, the San Francisco Symphony with the world's most powerful rock band, Metallica, was really about imagining music on top of and alongside of their songs.  Conducting a conversation between two different worlds that share the language of music.  Creating a dialogue between two worlds that celebrate the power of music.

I live in both worlds...  now, so does Metallica.

I began by listening to and absorbing Metallica tunes and really believing that I was a symphony orchestra playing along...  listening to the orchestra in my head and writing down what I heard.  I reacted to the songs, inventing melodies and counter-melodies that wove themselves around the tunes and adding orchestral color and texture to songs that were already complete!

Sometimes we supported the chords or the riffs, sometimes we commented on the lyric or on a solo line, adding our voices to the song, playing the right parts on the wrong instruments...  giving every player something to say; above all making it feel and sound like it had always been there.

Rock bands invent their own parts to play.  Orchestras rely on a composer and conductor to tell them exactly when and how and what to play.  They will read 'fly specks' on paper if necessary, and add their own expressive skill to each note...  making it come alive.

When the busses loaded with the symphony members arrived the first day of the show, they were met with cheering hordes of Metallica fans that had been camped out in the park across from the hall - not the usual greeting for a Symphony Orchestra!  Something different was going on.

The first contact with the audience was a frightening roar which terrified the orchestra, more accustomed as they  usually are to polite applause.  The crowd's reaction was like adrenaline on stage, and we all thrived on it.  That kind of approval is inspiring!

The event was in a 'formalized' setting with orchestra members in ties and tails, ushers in uniforms, and band members and audience in stage and street wear.

To feel the audience give a standing ovation to me and the orchestra even before one note had been played was both reassuring and friendly, but I also got the feeling that the audience was applauding its own daring in being there.  They were ready for anything...  Brave fans!

The beauty of nearly one hundred musicians - each of whom has dedicated their entire life to perfecting their ability to speak and express themselves through the music and their instrument and playing together - reacting to each other and the music is why the orchestra was originally formed.  They play concertos accompanying solo piano or violin at almost every concert...  but this was something else...  a Brave New World!

As the evening unfolded there was a breaking down of barriers - not only between audience and players, but players and players.  The band wandered around the stage and into the sections of the orchestra; orchestra players leapt to their feet, excited to be making music on the edge of their seats.  We were not simply supporting; and certainly not 'sweetening'...  instead, the symphony actually became the 'fifth Beatle' - a member of Metallica.

Example:  'Call of Ktulu' is a symphonic piece even without the orchestra.  A story in music.  Metallica music is always a story.  Adding an orchestra was like writing a film score to that story.  Dancing around the sections of the tune.  Every player in the orchestra was working as hard as Metallica does, committed to the music.

After two evenings of sturm and drang - I suppose the thing that sticks most in my mind was the sheer balance in power between electric and natural instruments.  The masiveness of it all was fantastic!  I keep returning to Metallica's 'Rolling Stone' quote:  "...We don't expect easy listening...  The band will match the 100-piece ensemble with full-on amplification..."

It was a full-on musical experience with all players playing hard and soaking through their tuxes and black formals from the exercise.  A bit like experiencing all nine of Beethoven's symphonies and the 'Rite of Spring' in one evening!  I remember during the intermission hearing string players saying how they should have brought a dry change of clothes, and "it's Mitchum deodorant time" from a perspiring horn player.  I think the physicality of conducting and playing was the Symphony's answer to Metallica's 'full on amplification' challenge.

When the evening was over, it didn't feel like it was made up of individual songs - just one very mood provoking storm of sound.

Imagine taking a very stark black and white picture, tough and relentless, unpredictable yet hypnotic - as black and white as a piece of music on paper...  as driving and powerfully honest as pumping guitars, bass, drums and voice can be...  and adding orchestral light and shade, bursts of color, and surprising blocks of sound from all the incredible expressive musical instruments that have been created over hundreds of years to speak and sing our passion, our lives.

So thank to Lars, James, Kirk, Jason, (and to me too), and every member in the orchestra for taking it on and making it fly!