Godzilla Through The Years - Part 2 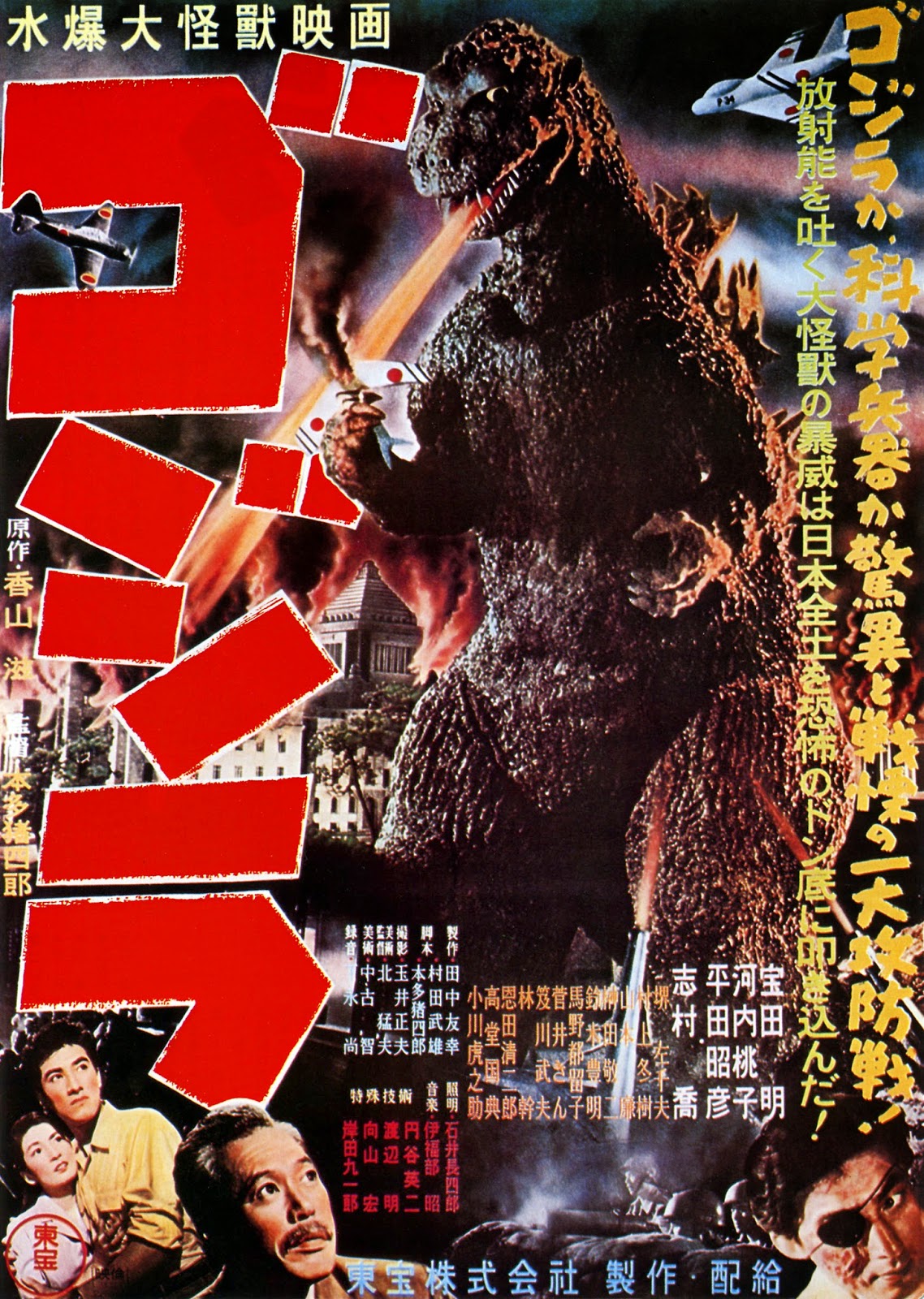 It all started in 1954.  Executives at Toho Productions in Japan were inspired by the films King Kong and Beast from 20,000 Fathoms to create their own giant monster movie.  The project was simply called G (for "giant") and was kept under tight secrecy while being filmed.  The title would eventually become Gojira - a combination of the Japanese words for "gorilla" and "whale" - which may or may have not been inspired by a an overweight stagehand at the studio. 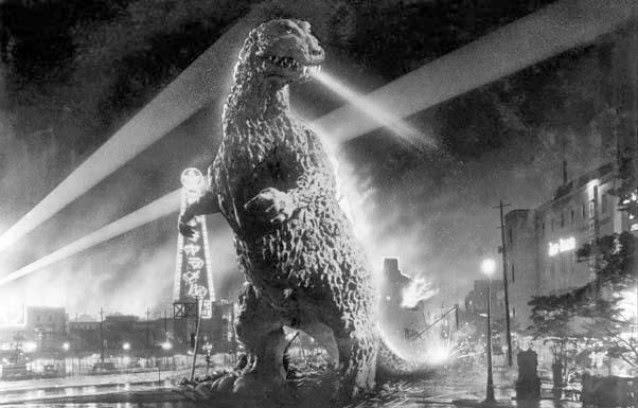 Despite being inspired by American films featuring giant monsters, Gojira was different kind of monster movie from the start.  The original film was quickly filmed and released in 1954, nearly a decade after the atomic bombs were dropped on Hiroshima and Nagasaki.  The director, Ishiro Honda, had witnessed the destruction firsthand and incorporated what he had seen in the movie. 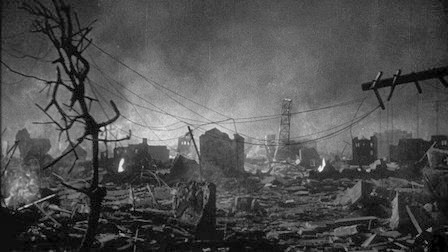 Another real-life inspiration for the film was an incident occurring just a few months before filming began involving a Japanese fishing boat called the Lucky Dragon that accidentally ventured into a United States atomic bomb testing area.  The crew was exposed to huge amounts of radiation which were so severe that at least one crew member died.  To make matters worse, some of the contaminated fish made it to the market.  This incident became known as the "Second Atomic Bombing of Japan."

Thus, the titular monster served as an allegory for nuclear holocaust and the tone of the film is very serious.  This is clearly evident throughout the movie, particularly during Gojira's assault on Tokyo.  The monster lumbers ominously through the ruins of the burning city leaving in his wake burned and irradiated victims. 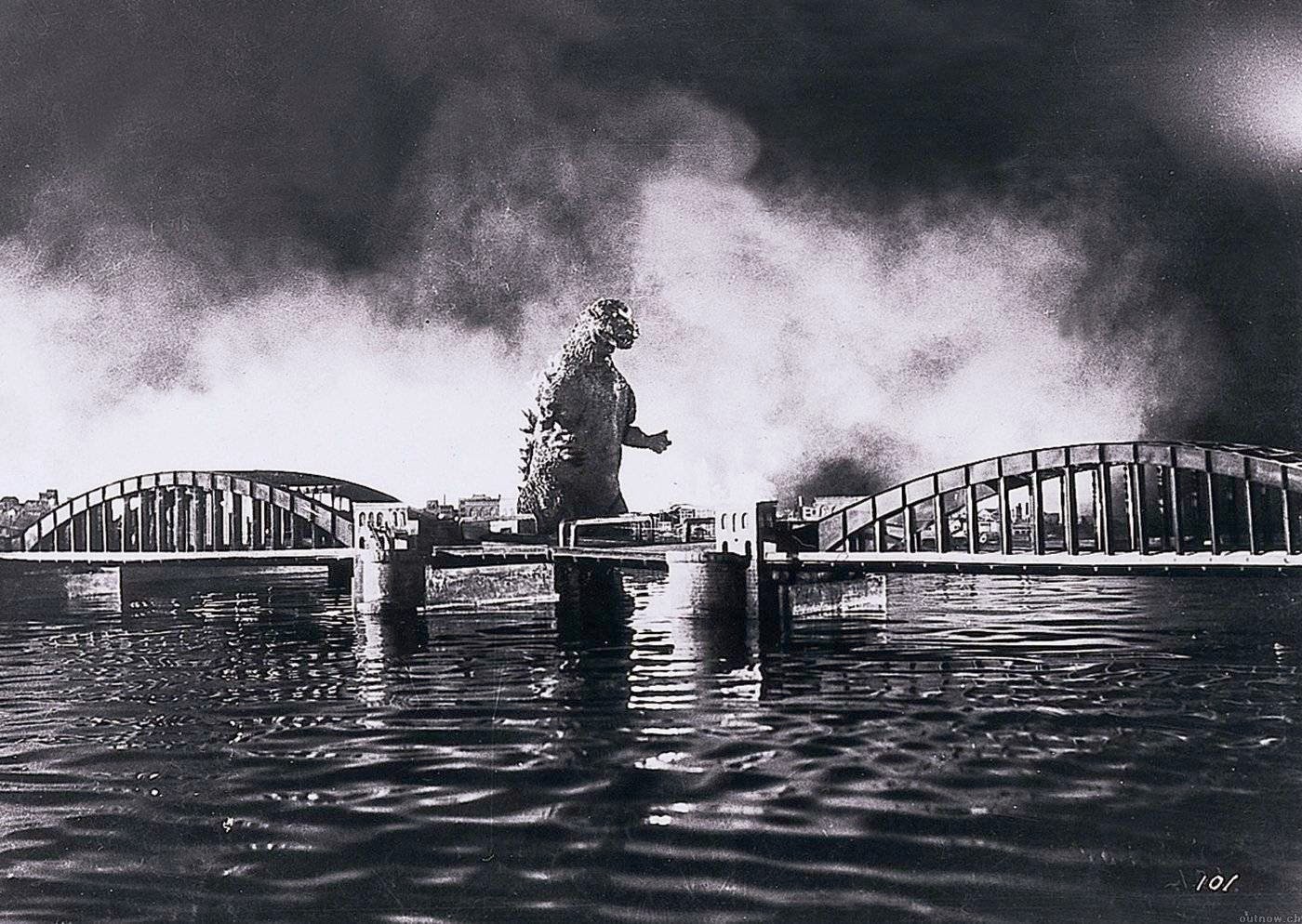 The studio had limited time and resources and could not replicate the stop-motion animation processes used to create the movie monsters that had inspired them so they got creative and created a suit for an actor to wear amid minitarues.  Thus, "suitimation", a practice that would be used in every Japanese Godzilla production even into the 2000's, was born.

The Gojira suit weighed over a hundred pounds.  Haro Nakajima, a stout stuntman who portrayed the monster in the original film (and subsequent others), often stated that the suit wore him and not the other way around!  The suit constantly rubbed against his body and caused painful blistering.  Another issue with this technique was the heat emitted by the studio lights which were twice as bright as normal due to the filming technique employed for the movie. 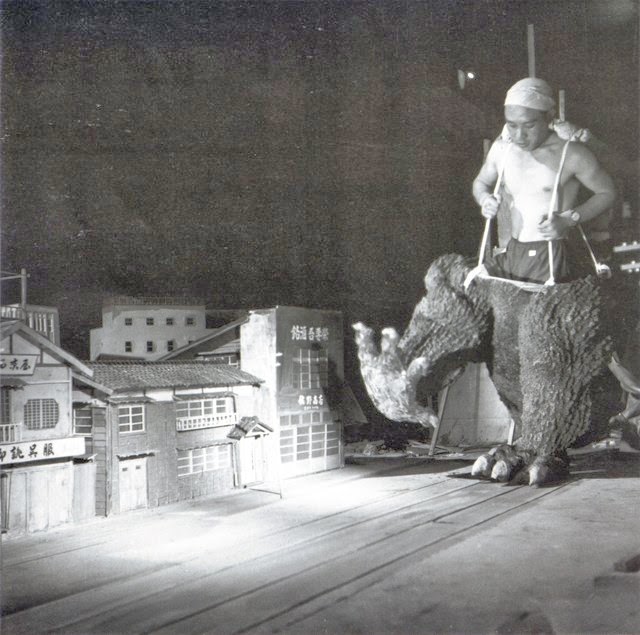 In order to achieve the illusion of scale and weight of the crumbling buildings the cameraman used high-speed film.  This meant that the actor had to do his parts very quickly.  In a stiff rubber suit with little to no ventilation, Nakajima could only endure wearing it for just a few minutes at a time and actually passed out from exhaustion on a few occasions! 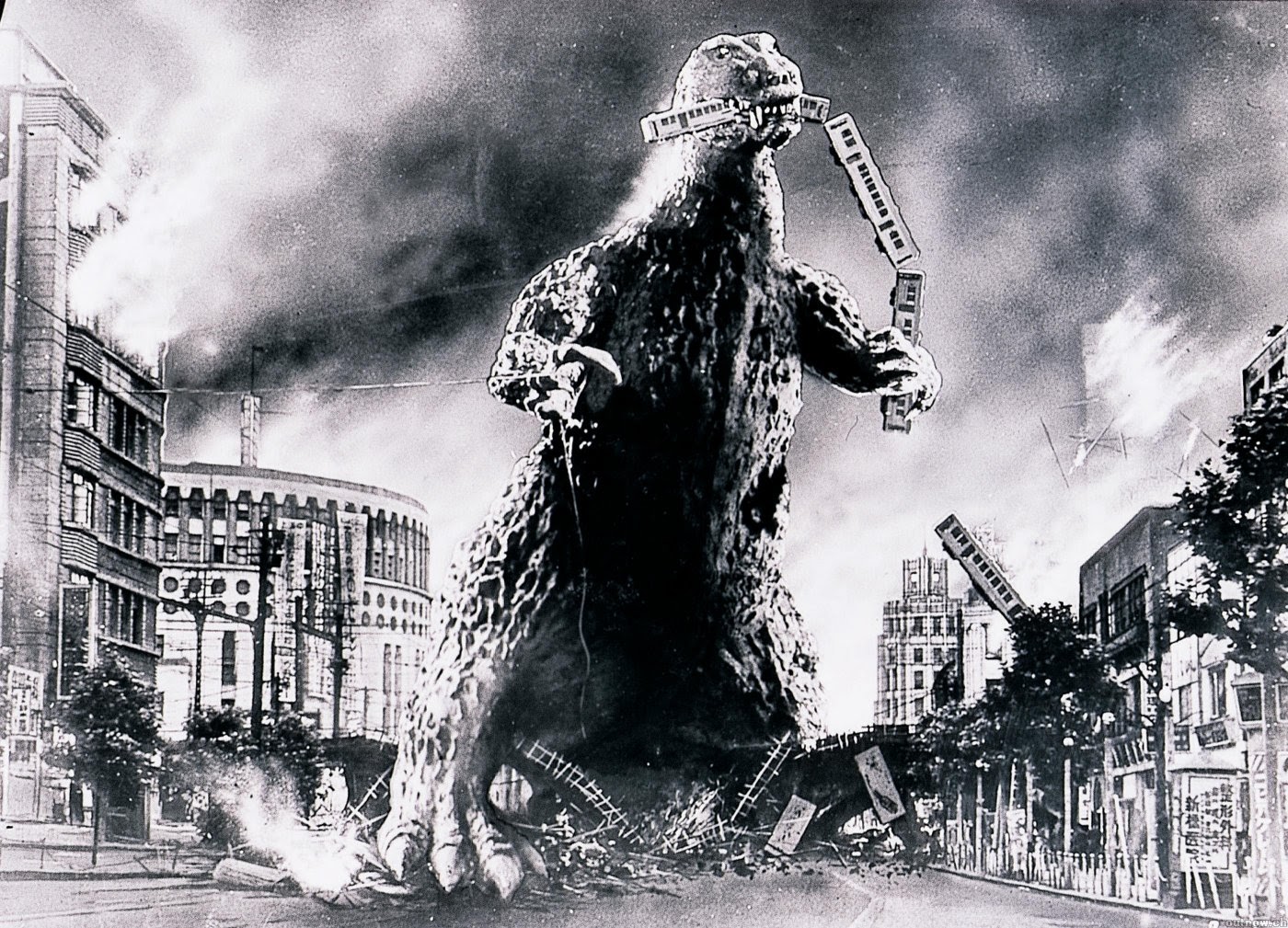 The design of the original Godzilla was basically a combination of different dinosaurs with some humanoid features.  His trademark grimace and huge dorsal fins set the creature apart from other giant monsters, giving him an iconic silhouette.  Godzilla's appearance changes sometimes from shot to shot, switching between a man in a rubber suit to a miniature puppet, but the design is for the most part consistent throughout the first film.

Another looming element contributing to films effectiveness is the music.  Composer Akira Ifukube scored memorable themes throughout the film.  His compositions give a sense of dignity to the film.  Ifukube is credited with creating another major contribution to this film:  Godzilla's distinctive roar.  In order to create a memorable, powerful sounding roar, many test were tried, but nothing seemed to have the desired effect.  Finally, in a moment of inspiration, Ifukube gave it one more shot.  With a resin-coated leather glove he rubbed a contrabass and then reverberated the sound.  The result was eerily ominous. That instantly recognizable roar is still associated with the monster to this day.


The movie was eventually re-released in America as Godzilla, King of the Monsters, although it was re-dubbed in English and very heavily edited.  Additional scenes featured Raymond Burr (who would late portray Perry Mason) as reporter Steve Martin (no, not THAT Steve Martin) who visits Japan and gets caught up in the action.  Through the use of some clever editing, American filmmakers were able to make it seem as though Burr was actually interacting with actors from the original film. 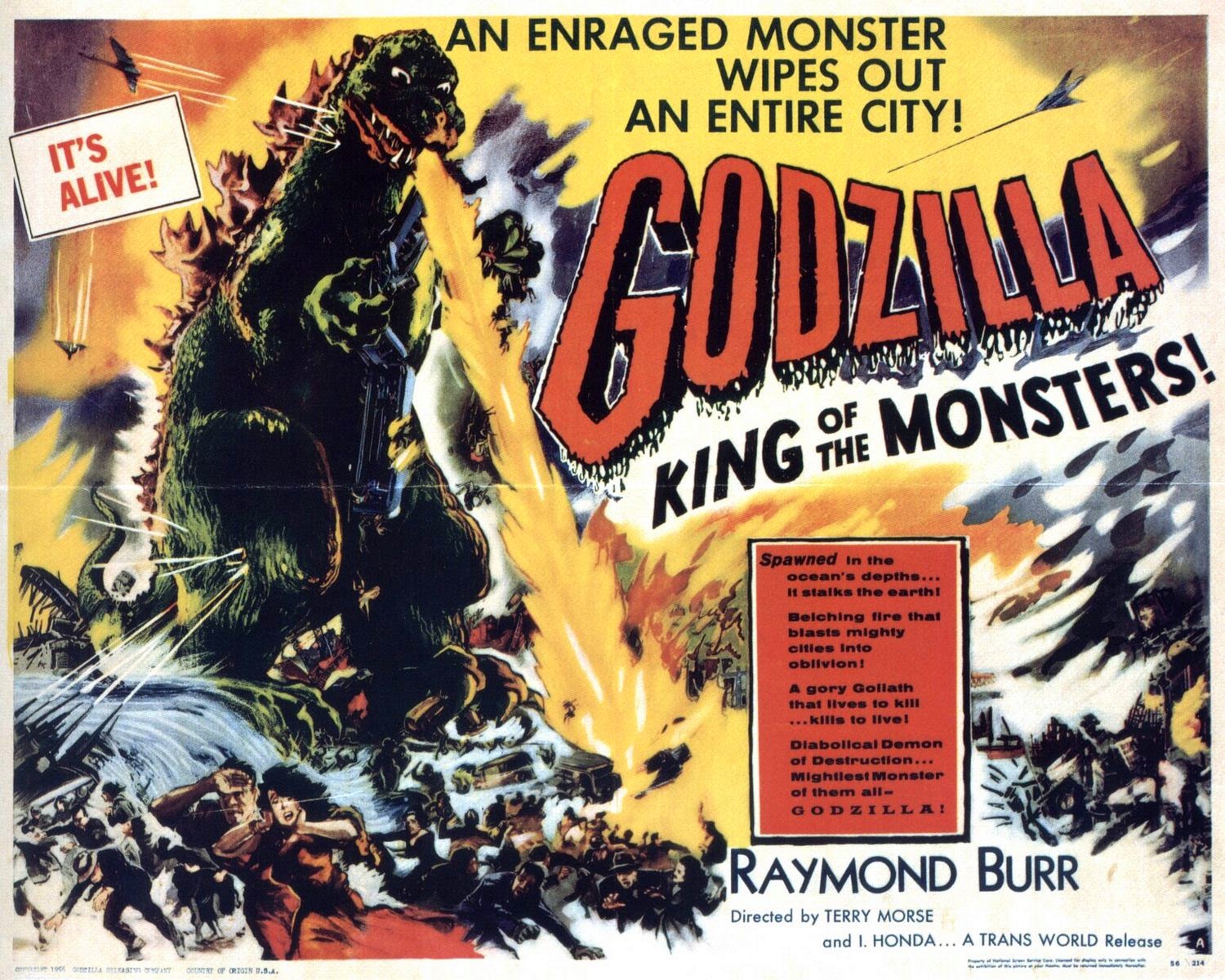 Gojira was ultimately success both at home and abroad.  The filmmakers almost immediately set about producing a sequel...

Previous Entry:
Part 1 - Past, Present, and Future... Godzilla and Me
Posted by Jonathan Brinson at 10:40 PM