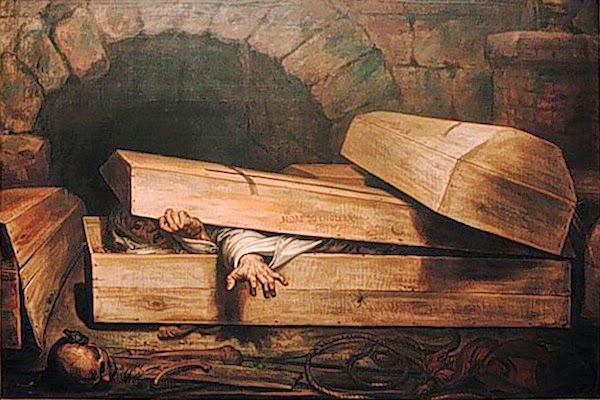 This was actually a legitimate fear back in those days.  Doctors were not as skilled at discerning the difference between someone who was dead or merely unconscious.  Due to the lack of preservation chemicals used in modern funeral homes, burial was often a quick affair in order to stave off the smell and general uncleanness of decaying flesh.  It was not completely unheard of for someone to wake up from unconscious or comatose states in the process of being buried or after burial had already taken place!

Enter John Bateson, an inventor who was (understandably) paranoid about this particular predicament.  Thus, the Bateson Revival was created.  The device consisted of a small bell attached to the lid of a coffin that was connected to a cord which would be fitted onto the hand of the deceased (or not). 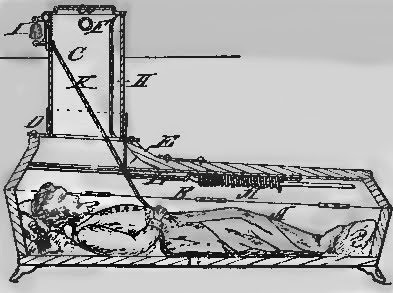 The device was meant to work in such a way that if one was to wake up to find themselves buried alive, they could ring the bell until someone was able to come and rescue them.  I'm aware of no account in which the device was actually used. However, many people had the same paranoia as Bateson...  And so he became a very rich man.
Posted by Jonathan Brinson at 11:14 AM