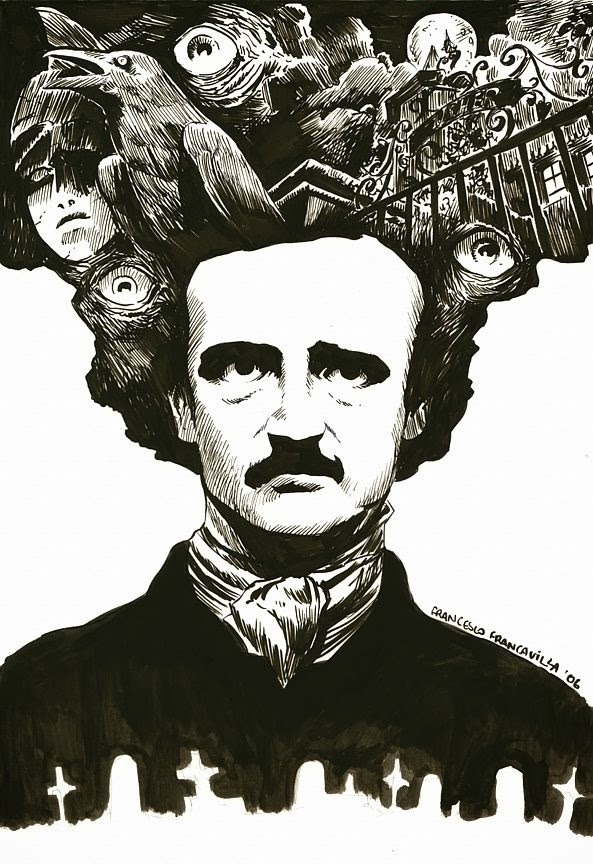 "True! --nervous--very, very dreadfully nervous I had been and am; but why will you say that I am mad?  The disease had sharpened my senses --not destroyed --not dulled them.  Above all was the sense of hearing acute.  I heard all things in the heaven and in the earth.  I head many things in hell.  How, then, am I mad?  Hearken!  and observe how healthily --how calmly I can tell you the whole story..."

I have taken a bit of a hiatus from working on the Cryptic Corridor as of late due to some personal tribulation.  I trust that you will understand.

I felt I would be remiss if I did not make at least some kind of posting something today as it would have been Edgar Allan Poe's 205th birthday.  While I plan on doing several posts on Poe and his work in the future, I figure I'll try to keep it short today.

What can be said of Edgar Allan Poe that has not been said before?  The master of mystery and macabre, Poe still fascinates and terrifies us even to this day.  Virtually all modern horror tales owe nearly everything to Poe; his legacy is unmatched.


One of my favorite stories written by Edgar Allan Poe is his Tell-Tale Heart.  His prose in this particular piece paints a vivid, horrifying picture of insanity.  First and foremost, what always stood out to me about this story was Poe's use of the "unreliable narrator".  As readers, we become accustomed to putting our trust in the person telling the story.  But right off the bat, we are given many clues that the man telling this particular tale is not quite stable even though he assures you of such.  Anyone fooled by his declaration of sanity is horrified to see the narrator's sudden descent into obsession and subsequent blood lust.

Another thing I always enjoyed about this story was Poe's use of suspense.  After the narrator commits his heinous deed he meticulously covers up the crime, only to be undone by his own "hearing acute" mentioned in the introductory paragraph.  Poe is able to make the reader really feel the pangs of insanity the narrator describes.

I saw the above cartoon several years ago.  While it is a very much abridged version of the story, it does an amazing job of capturing the madness of the thing.

The artwork at the beginning of this post was done by the excellent comic book artist, Franceso Francavilla!
Posted by Jonathan Brinson at 6:30 PM