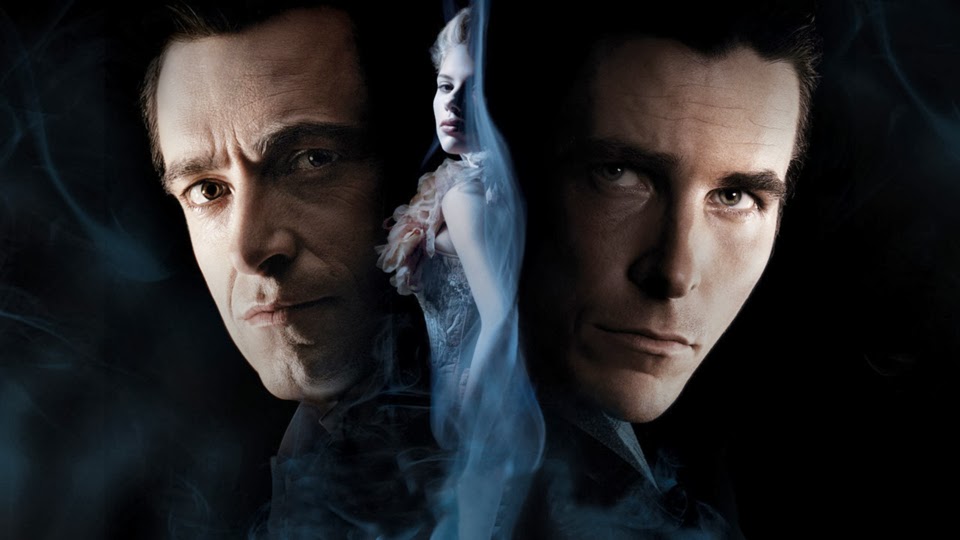 "Every great magic trick consists of three parts or acts.
The first part is called 'The Pledge'.  The magician shows you something ordinary:  a deck of cards, a bird or a man.  He shows you this object.  Perhaps he asks you to inspect it to see if it is indeed real, unaltered, normal.  But of course...  It probably isn't.
The second act is called 'The Turn'.  The magician takes the ordinary something and makes it do something extraordinary.  Now you're looking for the secret...  But you won't find it, because of course you're not really looking.  You don't really want to know.  You want to be fooled.
But you won't clap yet.  Because making something disappear isn't enough;  You have to bring it back.  That's why every magic trick has a third act, the hardest part.  The part we call 'The Prestige'." 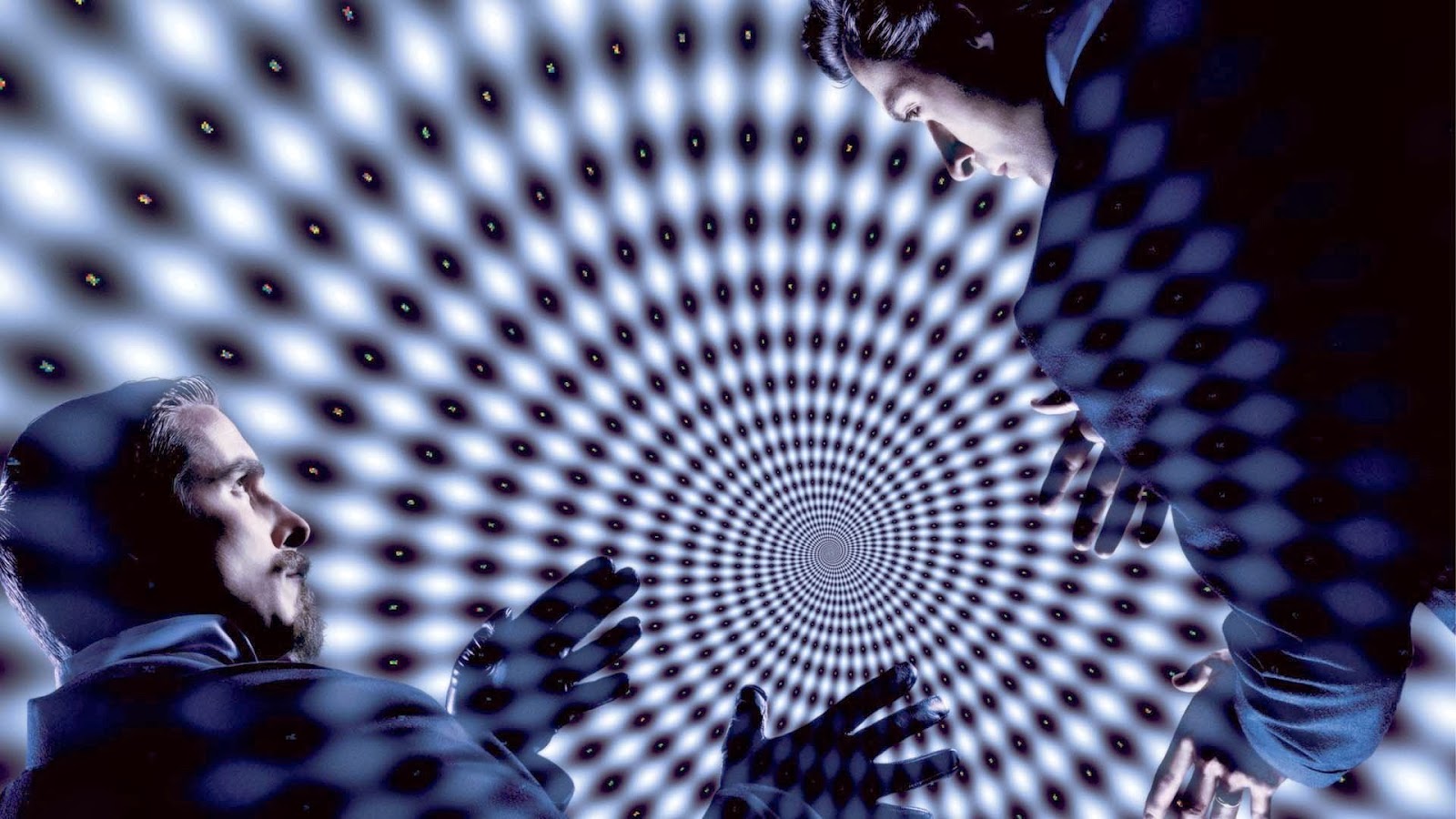 This is going to be a very difficult post to write.  I want to encourage you to watch the movie, but at the same time I do not want to reveal too much and spoil the film's twists and suprises...  Here we go:

Set in London near the end of the Victorian Era, The Prestige tells the story of two up-and-coming stage magicians:  Robert Angier and Alfred Borden.  At first, the two men are merely vying for top-billing, but following a tragic accident they are propelled into a vicious game of revenge and treachery.

Angier (played by Hugh Jackman) and Borden (played by Christian Bale) become obsessed with outdoing one another.  Their bitter, brutal competition takes a toll on their bodies, their relationships, their very lives.  It may be a bit of a spoiler to say so, but it becomes increasingly difficult to root for either of these characters as the plot develops.  Just when you think you can relate to one of the magicians, he does something that makes you cringe. 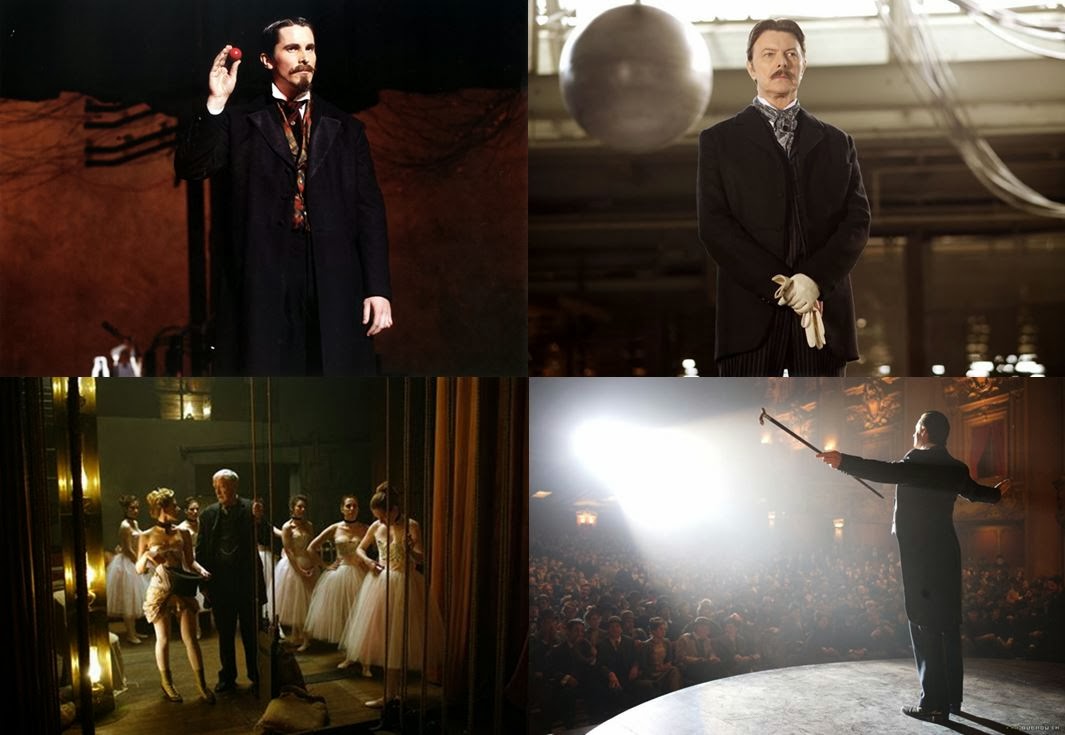 The film reveals some behind-the-scenes tricks of the trade of some real-life magic tricks of the time, many of which are genuinely disturbing (the water tank, the bullet catch, making birds "disappear" and "reappear"). Especially when things go wrong.  It's hard to believe that magicians of the era were willing to put their own lives - or, even worse, the lives of others - on the line to astound audiences.

As mentioned before, the film takes place during the Victorian Era, a time when the line between science and magic was very blurred.  The film makes a point of reminding us of this fact later in the film with an appearance of real-life "wizard" Nikola Tesla (played by none other than David Bowie).  How this historical man of science fits into the story you'll just have to see for yourself.  I've probably said too much already! 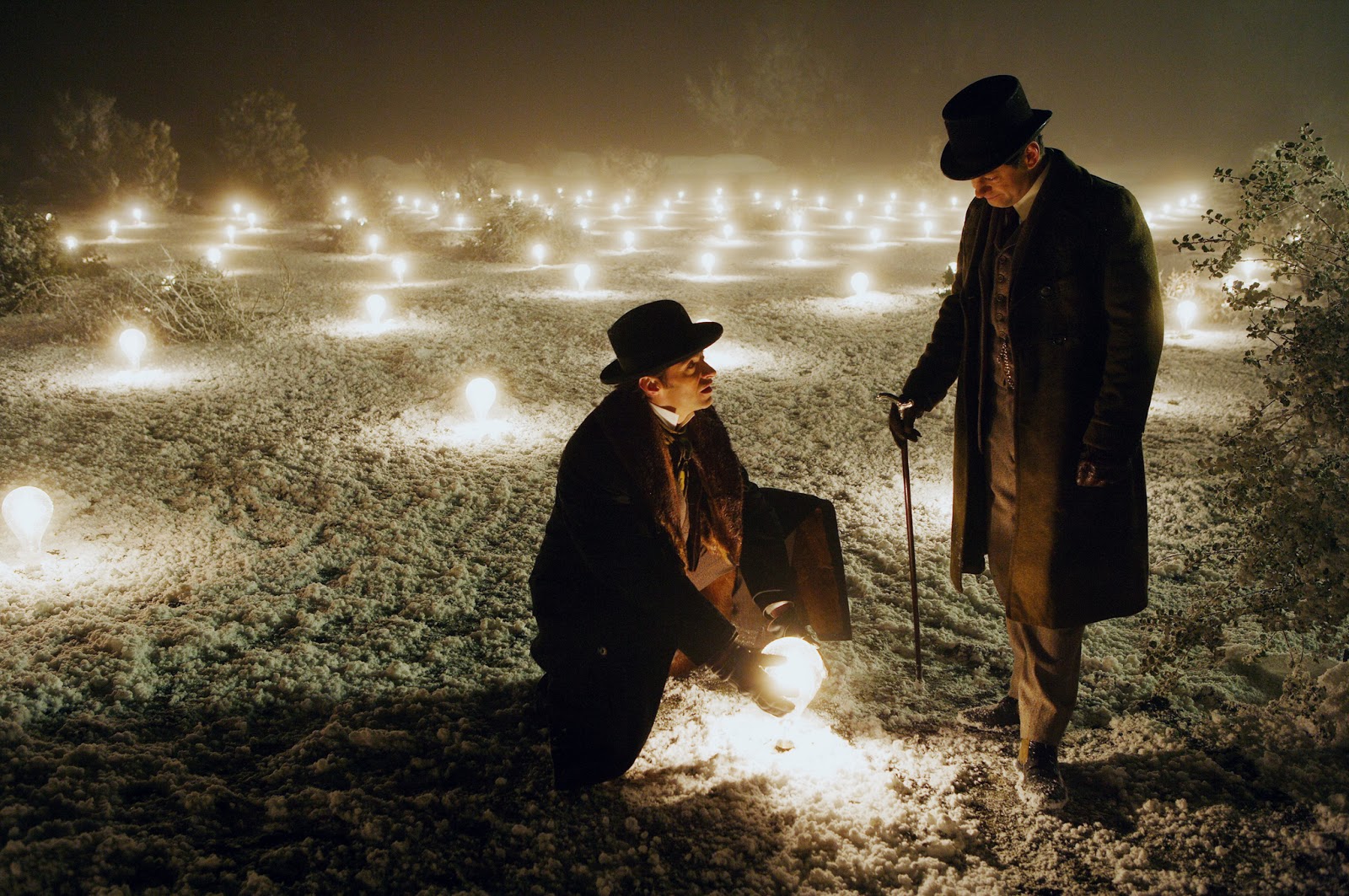 The director,Christopher Nolan (who is best known for his blockbuster Dark Knight trilogy) creates a complex, maze-like film in The Prestige.  Through the course of the movie viewers are introduced to the three parts of "every great magic trick":  The Pledge, the Turn, and the Prestige.  The film unfolds like it's a magic trick adhering to those three parts.  The story is told through two different journals written by the rival magicians so timelines crisscross and intersect at different points.  Additionally, valuable information is left out by occasionally unreliable narrators with secrets left to be revealed at a later time.

The fractured story-telling of the plot makes The Prestige a bit difficult to follow at first, but that's okay because The Prestige is one of those films that get better with each subsequent viewing.  It sounds cliche, but this is really one of those movies that you notice something new each time you watch it, whether it be recurring symbols, echoing motifs, or visual metaphors you didn't notice the first time around.

Being a tale of obsession and bitter rivalry, the film can be very depressing which probably renders it unenjoyable for some.  I, however, cannot recommend this movie enough.  It's one of those films that I enjoy immersing myself in.  The Victorian atmosphere, the sense of mystery, and twists and turns make this a most intriguing cinematic experience and a favorite of the residents of the Cryptic Corridor.
Posted by Jonathan Brinson at 11:38 AM