Nosferatu: A Symphony of Horror

I've been compiling a collection of monster movie trailers for a project I've been working on (more on that another time...  maybe).  Through the course of seeking out these trailers, it's been really fascinating to see how motion pictures have progressed through the years.  There will probably be more of these kinds of posts in the future. 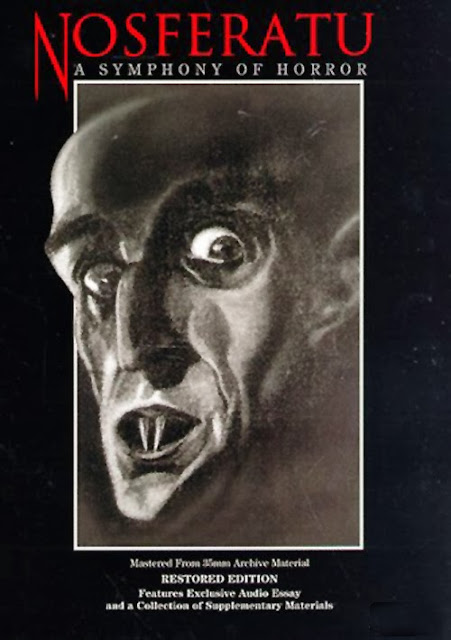 For the uninitiated, Nosferatu is a Romanian word that is sometimes synonymous with "vampire".  Nosferatu: Symphony of Horror is a landmark silent film from Germany released in 1922.   A German expressionist film, Nosferatu is still influential even to this day.  Nosferatu is not your typical vampire film.  Count Orlok is obviously a major threat in the film but the story also presents a unique, chilling idea of a vampire being a bringer of the plague.  This perhaps explains Orlok's distinctly rat-like appearance that sets his design apart from that of the usual movie vampire.
Silent films are unique compared to the movies of today. Obviously, there are no sound effects or vocal performances.  Inter-titles serve as narration and display dialogue essential to the story.  Those avoiding these films for the aforementioned reasons miss out on a truly special viewing experience.  Nosferatu was probably the first silent film I watched and having watched several now, this remains one of my favorites.  To me, this is a good movie to test the waters of silent films and see if it is something you would be interested in.

The music you may hear accompanying this particular film may differ depending on the version you watch.  The original score for Nosferatu has been all but completely lost, so most scores for the movie are varying interpretations.  I have heard of this film and other silent films being viewed publicly accompanied by live performers playing improvised music.  I would like to experience that someday!

Silent films are difficult for some to get into.  I know for me it was very much an acquired taste, but if you're into Horror, you should at least give this movie a try.  The music (depending on what version you watch), the lighting, and even the graininess of the film add to the film's creepy atmosphere.  I'm not sure that I could watch any other genre in this medium - aside from Comedy, thanks to the exaggerated  expressions and over the top pantomime performances.  Like many early movies, silent films had to improvise a variety of techniques to thrill the audience.  Nosferatu is no exception.  The film contains many memorable special effects that are mimicked even today, most notably the scene in which Count Orlok's distorted shadow is cast against the wall as it stalks its prey up a staircase.

The history of this film is very interesting.  The creators of the film very much wanted to make a movie adaptation of Bram Stoker's Dracula.  Unfortunately, the studio failed to secure the rights to do so beforehand.  As a result, they faced lawsuits from Stoker's surviving heirs.  In attempt to avoid trouble, the names of characters were changed, for example:  the "Dracula" character's name was changed to "Count Orlok" (Which sounds pretty darn cool too!).  The film was made, but Stoker's heirs still persisted and ultimately nearly all prints of the film were destroyed.  Only one or two prints survive today.


Posted by Jonathan Brinson at 3:10 PM