Tales of the Frightened - Boris Karloff


Boris Karloff is best remembered for his silver screen portrayals of monsters and madmen.  For crying out loud, the guy will forever be remembered in cinematic history for having not one but two of the iconic Universal Monsters roles under his belt in Frankenstein's Monster and the Mummy!

But Karloff was also recognized for lending his vocal talents to spoken word work.  He was a regular performer on radio dramas.  If you've ever enjoyed the How the Grinch stole Christmas cartoon around the holidays, it's Karloff's vocalization that serves as voice of the Narrator and the Grinch.

From what I can gather, at some point in his career, Karloff did syndicated radio work for Reader's Digest Magazine sometime in the late 50's, producing brief segments that eventually became Tales of the Frightened.  "These radio spots were not necessarily horror stories, but with Karloff you could never be sure..." according to Old Time Radio Catalog. 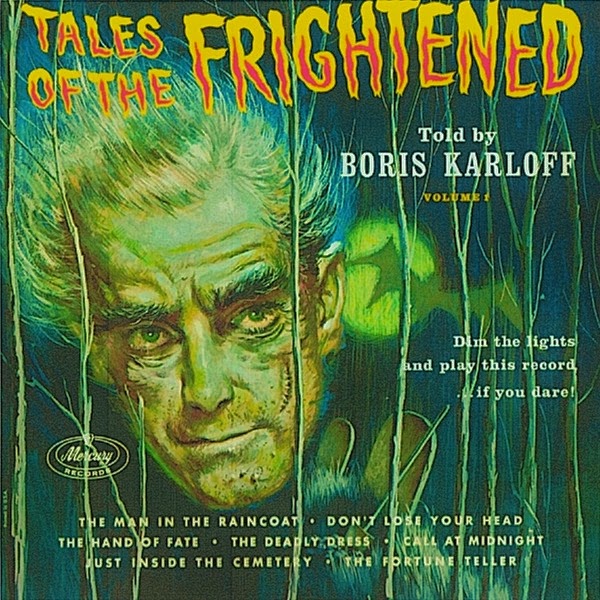 In 1957, a collection of these segments were compiled to create an album that was released by Mercury Records.  Michael Avallone, an author famous for writing thrillers, mysteries, and secret agent stories authored the stories Karloff read in his signature tones.  Sound effects and experimental electronic music (a genre still very much in its infancy at the time) was provided by the group the Electrosoniks.  The combination of all this talent results in an album of thrilling, chilling tales of terror that are as genuinely creepy as they are fun (Well... in the morbid, macabre sense...  What else would you expect?).


The liner notes from the album:

These six simple words, innocuous at first glance, serve as a mocking prelude to one of the most gripping narrative performances in the history of spoken word recording.  For it is none other than Boris Karloff posing the simple question in all of his spine-tingling, low-voiced perfection.  Acknowledged for thirty years as the undisputed master of the mysterious, the sinister-sounding Mr. Karloff is at the peak of his storytelling powers as he guides you through a world's library of terror.  The haunting teals rendered here for chilling enjoyment were personally selected by Mr. Karloff, who is a connoisseur in the field of the bizarre and terrifying.

Which was your favorite Karloff performance?  The Frankenstein Monster?  The Mummy?  The Body Snatcher?  Fu Manchu?  The mad butler in The Old Dark House?  Perhaps the very sight of this stooped, superbly gifted performer of the grotesque has been sufficient in the past to ensure your rapt attention.  Then a surprise is in store for you.  This remarkable actor (who is easily one of the world's most identifiable faces) will amaze and astound you with the sheer evocative power of his speaking voice.  Although it has been thirty years since the Frankenstein Monster electrified the world of entertainment from New York to Siam, it is not too late to underscore the simple truth that the Karloff voice is as much a part of his magical presence as his photogenic make-up.

The ominous voice, the rising suggestion of imminent doom, the haunting caress of terror, the suggestive hush of horror unfolding are all here in a veritable garden of evil.  Mr. Karloff rakes up the dead leaves of fear's history with the zest and zeal of a true believer.  Whatever a frightened human being has conjured up in his mind to combat the darkness of the unknown is here at hand.  Werewolves, vampires, haunted houses, superstition, psychic residue, the undead, the unspeakable, the manifest destiny of death - these the Elder Statesmen of the Eerie brings you with unforgettable relish.

All of these uniquely Karloffian tales were authored by Michael Avallone, long a Karloff fan himself and equally devoted to the terror tale.  Mr. Avallone, one of the nation's finest mystery writers, has surpassed anything he has ever done before.  "Tales of the Frightened" will long be remembered as a highlight in the career of Michael Avallone.  The feeling persists, as you listen to the tales, that he must have been born to write them for the great performer who speaks the words.  Mr. Karloff has rewarded him with his finest vocal effort.

Then pull up a chair and prepare yourself.  Make sure the doors are bolted, the windows locked and the fireplace roaring with blazing logs.  There must be no dark corners, no murky shadows, no questionable areas where no light falls.  You are about to go on a thrilling journey into the undiscovered country of the outre'. A land where a man cannot escape his fate, where a cat can terrify a human being, where a woman is capable of lifting her head off her shoulders to re-do her hair, where a curious man with a strange umbrella follows you down the street... and the great unknown of uncertainty is poised at every turn of the road.


Years ago, at another yard sale of course, I found a paperback book called Boris Karloff Present Tales of the Frightened also written by Michael Avallone.  Apparently this was a tie-in book that contained the same stories from the album.  There was also a second volume of Tales of the Frightened in the vinyl format as well at some point with more stories.

Just today I received my vinyl copy of Tales of the Frightened that I recently won on an online auction.  I can't wait for the sun to set here at the Cryptic Corridor so I can fire up the turntable and listen to Boris Karloff read these classic stories of terror!

Posted by Jonathan Brinson at 5:44 PM