The Music of Mastodon 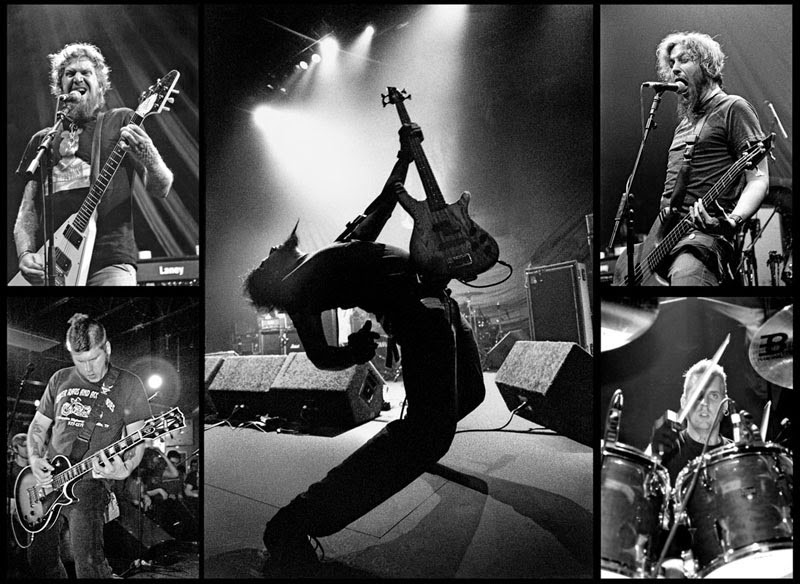 I first heard the sonic rumblings of Mastodon back in college.  Some online article was calling them "the next Metallica" so, of course, I had to check them out.  Whether the author of that half-forgotten article will end up being correct remains to be seen.  Mastodon is still very much in the process of forging their own legacy (Although they can boast numerous awards among the Metal community and two Grammy nominations).  One thing is for certain:  Mastodon is easily among the most dynamic and intriguing metal acts on the scene today.  Like the monolithic prehistoric beast the band is named after, Mastodon is primal and heavy, unrelenting and...  weird.

While I cannot remember the first Mastodon song I ever heard, I do recall being instantly drawn in by their unique sound and immediately wanting to hear more.  A decade later, this is a consistent craving...  Even after 6 albums, I can't get enough.  I devour each release and find myself obsessively longing for the next.

The instrumentation is amazing and tight.  Even if you are not a fan of the Heavy Metal genre, you can certainly appreciate the skills of every member of Mastodon.  Like most metal bands, the core sound is defined by drums frantically driving the pace while the guitars alternate between thick riffs and brain-metlting solos.  But Mastodon injects elements of punk, bluegrass, classic rock and other genres that one would not expect to mesh.


The band also experiments with synthesizers, organs, and effects pedals that serve to enhance the ominous and creepy vibe of some songs. Through the years nearly every member of the band has contributed vocals which inexplicably range from piercing screams to harmonic melodies.  The combination of all these elements lead to some thrilling dynamics and genre-defying musicianship.

Speaking of genre...  Metal is very unique for a number of reasons.  Perhaps one of the most intriguing (and hilarious and occasionally frustrating) idiosyncrasies is that the genre is divided and further sub-divided into a plethora of very specific (yet, loosely defined) sub-genres.  Just to name a few: speed metal, death metal, thrash metal, power metal, viking metal, etc...  The list literally goes on and on.  Fans will endlessly critique and debate one band's sound in attempts to decide how to properly classify the band and label it as falling within a particular sub-genre (or two or three).  Another quirk of the genre is the loyalties of the fan-base which tend to be very fickle. A band can be beloved and faithfully followed after just one album, only to be hatefully derived for changing their song structures and musicianship on the next.  Of course, the ultimate kiss of death is for a metal band to be labeled "not heavy enough".

Like many bands within the genre, Mastodon's signature sound has been classified in a number of various ways.  Sludge metal, stoner metal, groove metal...  Again, the list literally goes on and on.  However, one label that has consistently stuck is "progressive metal", since the band regularly incorporates a number of experimental elements, including dramatic shifts in tempo, unique instrumentation, and psychedelic interludes.  Mastodon's sound is constantly evolving and each album is distinctly different, and yet, unmistakably Mastodon.

Mastodon has drawn more than their fair share of criticism for their ever-changing sound.  Like many bands unafraid of embracing change and further developing their music, they have been unfairly accused of "selling out" to create more "radio friendly" songs (Say what you will, but I have a hard time imagining many songs from Mastodon's catalog on the Top 40 countdown).  While Mastodon have indeed flirted more with Hard Rock on recent albums and have gotten more catchy, they have somehow retained the elements that make their sound so unique, remaining very original and, of course, progressive and "heavy".

In addition to the constantly shifting musical landscape the band generates, Mastodon is also notable for its concept albums.  Leviathan is a tribute to Herman Melville's classic novel Moby-Dick.  Blood Mountain is narrative-based album about a fictional mountain and a hero's struggle to battle his way past a bestiary of strange creatures on his way to the top.  Crack the Skye deals with a variety of themes, but mainly centers on Czarist Russia, Rasputin, and astral projection.  The band's most recent albums have abandoned the theme-based approach, but the eclectic lyrical elements of the songs remain somewhere "out there" in Mastodon's bizarre fantasy-land.

Based soley on their amazing album artwork and their offbeat lyrical themes of prehistoric creatures and mythical beasts, if there was ever a band I was destined to fall in love with, it had to be Mastodon.  For example:  How could you not adore a ballad to a swamp-dwelling monster preceded by creepy sound effects and psychedelic synthesizers?

It was very difficult picking out individual songs for this post.  Be on the look out for more Mastodon in the future!  For more music and info check out the band's site.
Posted by Jonathan Brinson at 11:30 PM