"A Canticle for Leibowitz" 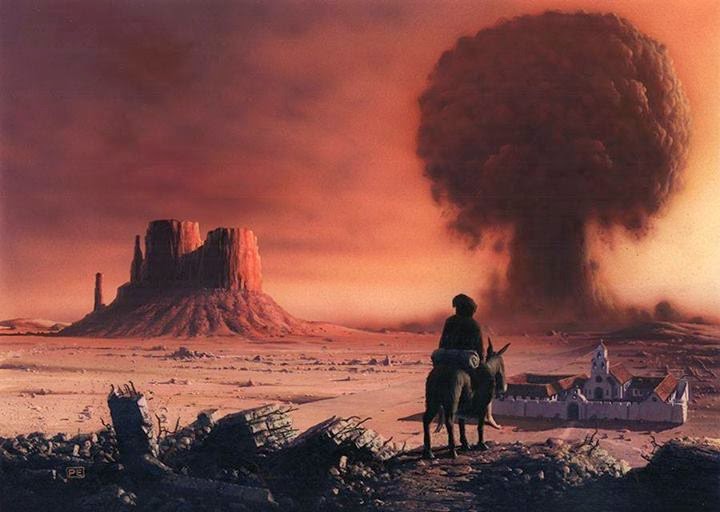 My high school English Literature teacher, Mr. Mayfield, was very much into Science Fiction, Fantasy, and comic books.  Suffice to say, we got along quite well.  For the most part (More on that another time perhaps...).  He always chose unorthodox books and stories for us to read and analyze in class.  We never knew what he would pull off the shelf!

One such book was Walter Miller Jr.'s "A Canticle for Leibowitz", which I gained a genuine appreciation for long after high school.

The book a post-apocalyptic Science Fiction novel set 600 years after the "Flame Deluge", a worldwide nuclear war which destroys modern civilization.  Following the cataclysm, society devolves as it violently turns its back on scientific advancements.  The majority of the survivors blame the disaster on technology and the pursuit of knowledge.  The irradiated, partially mutated mobs - proudly calling themselves "Simpletons" - set about burning books, killing readers, and shunning all forms of learning during an revolutionary event called the "Simplification".

During the Simplification, a Jewish electrical engineer named Isaac Edward Leibowitz forms a Roman Catholic monastic order called the Albertian Order of Leibowitz which is based at an abbey in the desert of the American Southwest.  The mission of the Order is to preserving knowledge  for future generations.  Thus, the monks save as many published works as possible, smuggle books (booklegging), memorize and copy entire texts, and actively search for new artifacts from the previous age called "Memorabilia". 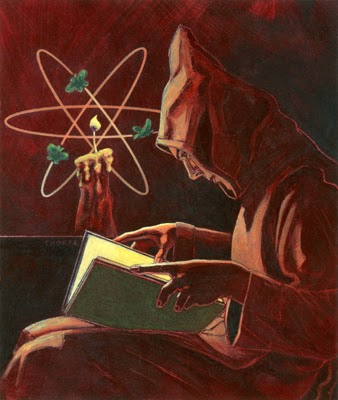 I never really thought about it at the time, but I suppose this book could easily have been considered somewhat subversive by either the administration or parents in our small town.   A major point of interest of the plot is that the author depicted the monks, an embodiment of religious establishment, defending and protecting scientific knowledge.  Obviously this would be considered atypical, a juxtaposition for most.  Indeed, the Catholic church and a variety of establishments professing faith have had a history and continuing reputation of suppressing and stifling scientific progress and discovery through the ages.

However, I don't remember anyone in our local religious community raising a fuss and the book had no major effects on my faith.  The preacher of the church I attended while growing up, he was a Chemistry teacher with an engineering background and was a candidate to participate in NASA's Teacher in Space Project.  Without going into my beliefs too much (I have a whole other blog for that) I have always felt that Science informed my faith and actually reinforced it rather than contradict or destroy it. To me, truth is truth, regardless of the source.

But, anyway...  Getting back to the book itself:

I didn't realize it, but Miller was a well-established Science Fiction writer during the 50's, writing stories for several magazines at the time.  Apparently "A Canticle for Leibowitz" was originally developed as a standalone short story which comprises the book's first section.  After completing another short story set in the same universe, Miller decided to make some revisions and add a third part to create a cohesive novel.

In the end, the book is made up of three sections which skip ahead in the world's timeline.  Without spoiling too terribly much, the book reveals a cyclic societal history that could call into question the original civilization's true beginnings. 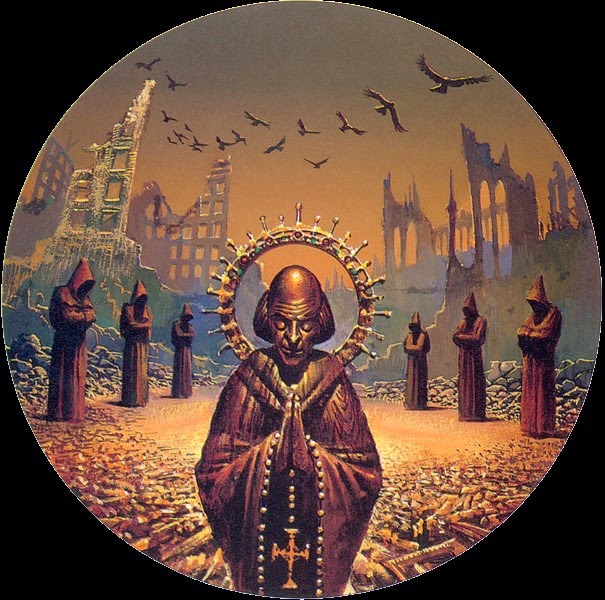 I remember being impressed by Miller's world-building (this was long before I was aware of such a term) and fascinated by the ideas presented in the novel.  I recall discussing with my friends the possibilities of various future religions discovering artifacts from our own civilization and mistakenly attributing great spiritual significance upon them.  Behold:  The Holy Game-Boy of Saint Smith!

Overall, the book is a great read and I recommend it for anyone interested in Post-Apocalyptic literature or just a good Science Fiction story.
Posted by Jonathan Brinson at 9:10 PM