The Brutal Life (and Afterlife) of the Bucaneer Blackbeard 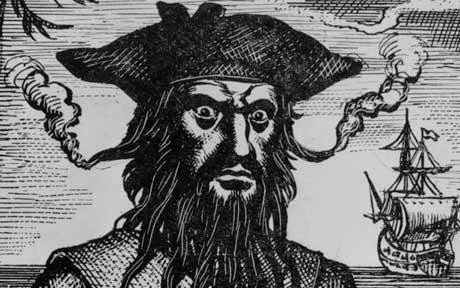 Blackbeard (real name Edward Teach or Edward Thatch) is probably the most infamous and storied of pirates who sailed under the black flag during "Golden Age of Piracy" (1650-1726).  While not much is known about his early life, there are a plethora of legends surrounding his career as a pirate.  It is speculated that Teach may have actually been born into a wealthy family before becoming a sailor, then privateer, and ultimately pirate.  Apparently, Teach got his start in the career of piracy under under another pirate, Benjamin Hornigold.  Teach was given command of his own ship by Hornigold, who was sort of a mentor to the young Edward.

Hornigold was given a King's pardon and left the pirate business, leaving Teach on his own.  It was in 1717 when he and his crew captured a French slave ship called La Concorde.  The ship was retrofitted for piracy and renamed the Queen Anne's Revenge.  The ship boasted 40 cannons, making it a force to be reckoned with and probably the most dangerous pirate ships of all time.  The Queen Anne's Revenge was to be Teach's flagship as he went about terrorizing Atlantic and Caribbean shores, commanding two other ships with a combined crew of about 150. 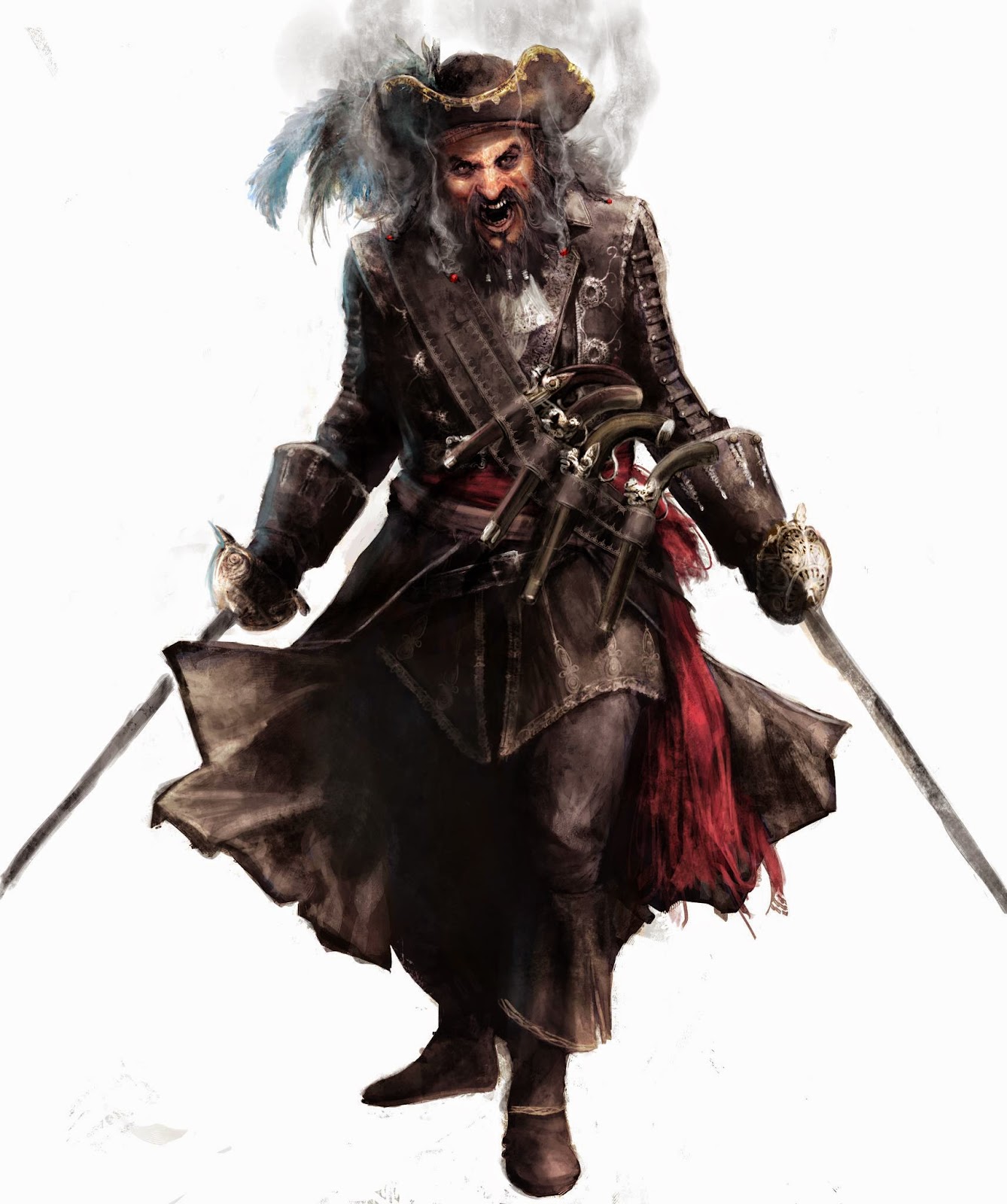 Not long after his appropriation of the Queen Anne's Revenge, Teach was first called Blackbeard thanks to his trademark thick, black facial hair which he grew long and braided.  Blackbeard had the reputation, as well as the image to match.  He was once described as "such a figure that imagination cannot form an idea of a fury from hell to look more frightful".  In the heat of battle Blackbeard could be seen robed completely in black, armed with an arsenal of pistols.  As if his imposing figure wasn't terrifying enough, Blackbeard famously lit slow-burning fuses in his beard which gave off a sputtering, hazy smoke.  Indeed, he must have looked like some kind of  awful hell-spawn as he boarded his victims' ship.  It's little wonder that many surrendered on sight.

Like many pirates, Blackbeard had a very short career which ended in an early death.  But Blackbeard didn't go down without a fight.  It was November 22, 1718 when the Royal Navy finally caught up with him.  With most of his crew on ashore, Blackbeard was left with a vary small fighting force, but chose to engage his enemies anyway.  After nearly escaping, the Royal Navy was finally able to board Blackbeard's ship. 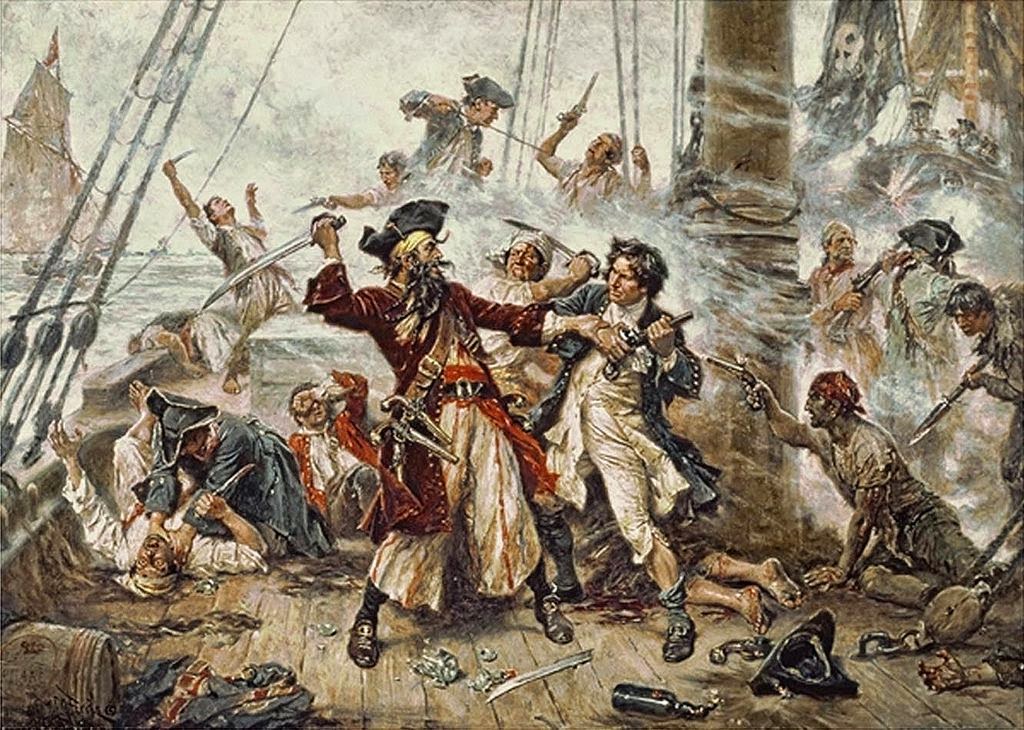 A prolonged hand-to-hand battle began, during which the notorious pirate fought so fiercely that he managed to break the blade of the his opponent's sword.  Blackbeard was eventually isolated during the battle and surrounded.  He sustained five bullets and twenty cuts from the blades of his enemies before finally going down.  His head was cut off, reportedly to ensure once and for all that the notorious pirate was actually dead.  Blackbeard's head was hanged from a Royal Navy ship as grisly proof of his demise.  His body was thrown overboard when - according to legend - the head moaned, "Come on Edward!"  The decapitated body was said to have swam three laps around the ship before it sunk into the depths below. 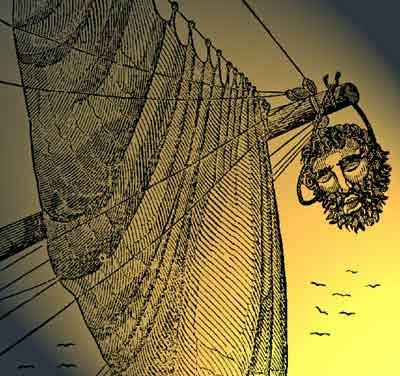 But the story doesn't end here...  Blackbeard's head remained on his enemies' ship at least until January of 1719.  Eventually his decomposing head was stuck onto a pole by authorities in Hampton, Virginia as a warning to other pirates.  According to some, his head was at some point taken down and integrated into a punch bowl in the Raleigh Tavern of Williamsburg.  Other sources go on to say that the skull was later plated with silver and fashioned into a drinking cup where it apparently remained until 1903.  Some believe that it ended up in the possession of a secret society at Yale university.  In 1989 the skull was said to be found at Blackbeard's Castle.

Locals of Ocracoke Island, North Carolina tell tales of a strange light known as "Teach's Light" that is said to appear around the shore of the island.  Another region called Teach's Hole is said to be the haunted by the glowing spectral manifestation of Blackbeard's body that comes out on moonless nights, floating on the surface of the water or stalking beneath, ever groping for its missing head.

Posted by Jonathan Brinson at 9:00 PM