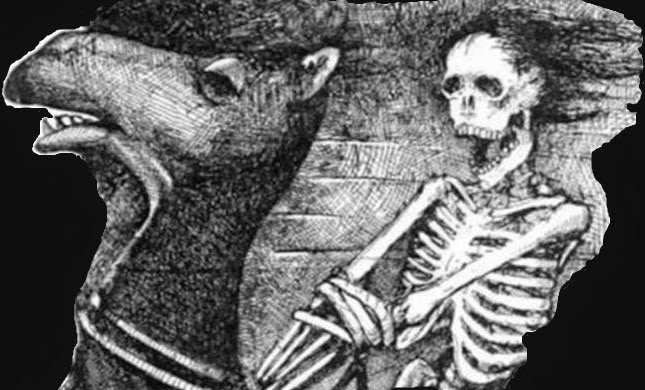 For about a decade back in the late 1800's, settlers in American Southwest had reported numerous sightings of a phantom creature they called the "Red Ghost":  A spectral beast of burden bearing a ghastly rider upon its back.

In 1893 a farmer in Arizona spotted a large animal on the horizon, at the edge of his property.  Suspecting the beast to be a predator of some kind, he shot and killed it.  He was shocked to discover that the dead creature was a camel.  The animal wore a saddle with mysterious rope binding attached to it.  The farmer had found the Red Ghost!

Oddly enough, this and other strange tales of the Red Ghost apparently owe more to fact than fiction.

In 1843 the U.S. Army Quartermaster was faced with the challenge of providing supplies and mail to remote western outputs.  Unfortunately, pack mules and horses were not up to the task with the heat and harsh terrain of the desert proving to be too much for them.  Eventually, a unique solution was proposed:  Camels! 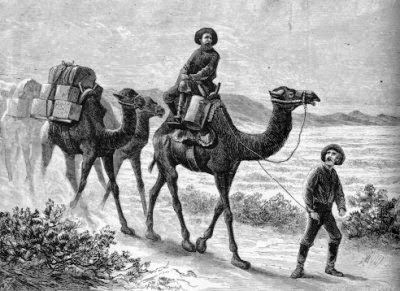 Thus, the U.S. Camel Corp was born. The camels were ideally suited for the task being already acclimated to the conditions of the desert and were able to carry riders and supplies with little difficulty.  The program was successful and operational until around 1866 when the Transcontinental Railroad rendered it obsolete.  The camels used in the corps ended up being sold to circuses and private owners, but some managed to escape into the wilderness, which might explain the presence of a camel in the Arizona desert, but what of the Red Ghost's legendary rider? 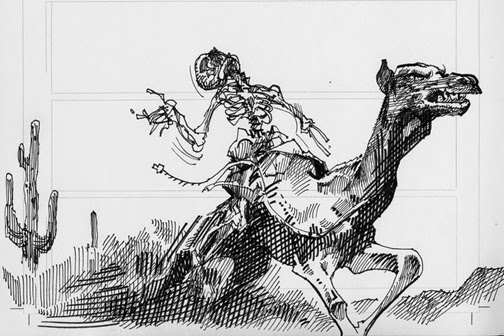 This is where some speculation comes in:  The story goes that a young solider within in the corps who was fearful of camels slipped up somewhere along the way, and landed in some trouble.  In a cruel form of discipline, the man was bound to a camel to teach him a lesson.  Unfortunately, before he could be set free, the camel escaped into the desert, taking the man along for the ride.  It is supposed that the unwilling passenger, unable to free himself, died on the camel's back. If this is true, the rider could conceivably had rode on the animal's back for years, slowly decomposing until the point it fell off.
Posted by Jonathan Brinson at 3:56 PM