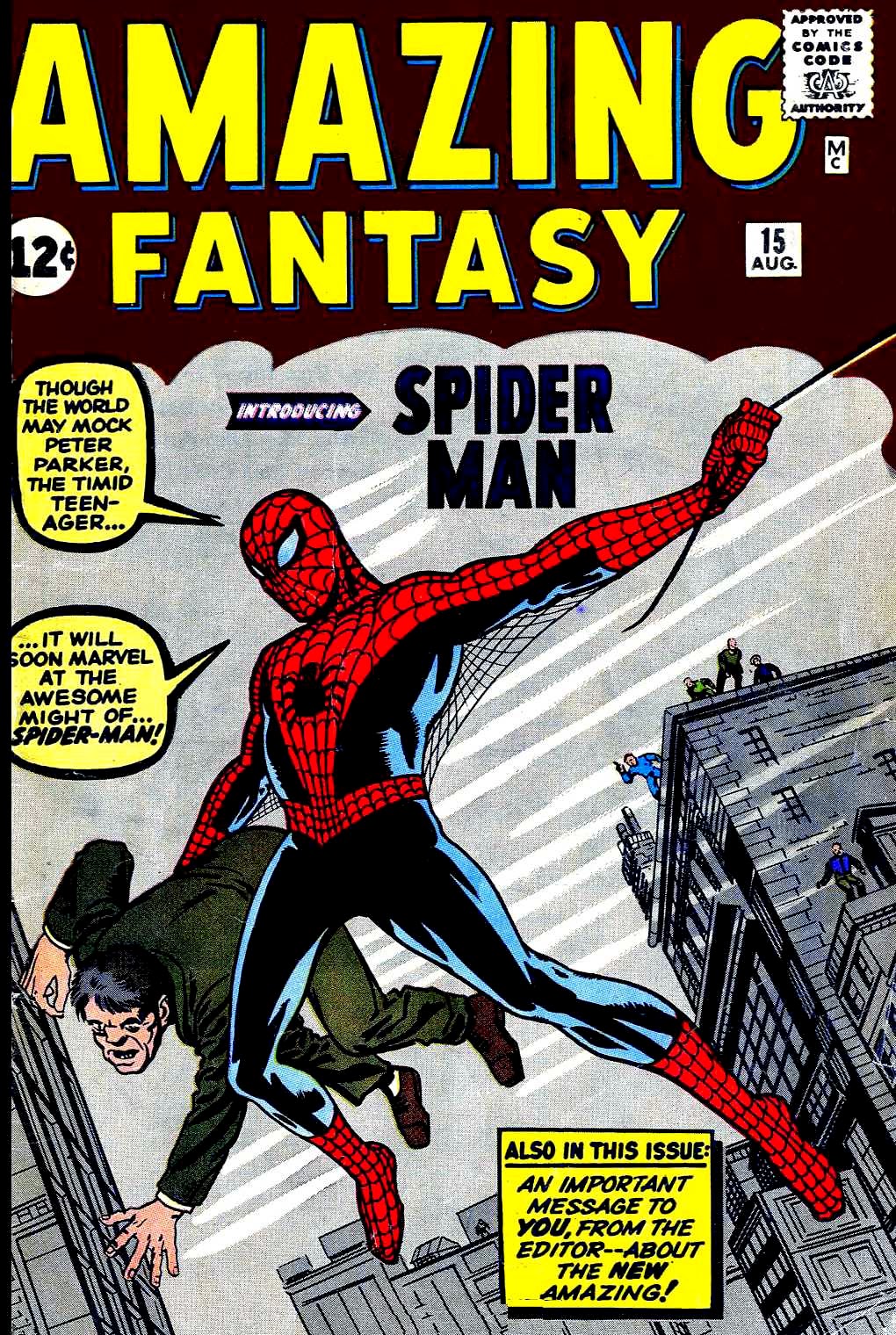 Amazing Fantasy #15 was first printed in 1962, but it was in the mid-90's, when I was in middle school, that Marvel began releasing reprints of the original Spider-Man stories.  The first issue was, appropriately, a reprint of Spider-Man's first appearance from Amazing Fantasy #15.  I'll never forget laying on the carpet of my old room, elbows propping my head up, reading through those magical pages being totally enthralled.

Spider-Man was most definitely my favorite character at that time and I was already somewhat familiar with the details of his origin story, having read a synopsis on a trading card.  In spite of this, I wasn't prepared for the emotional, life-altering journey I was about to embark on... 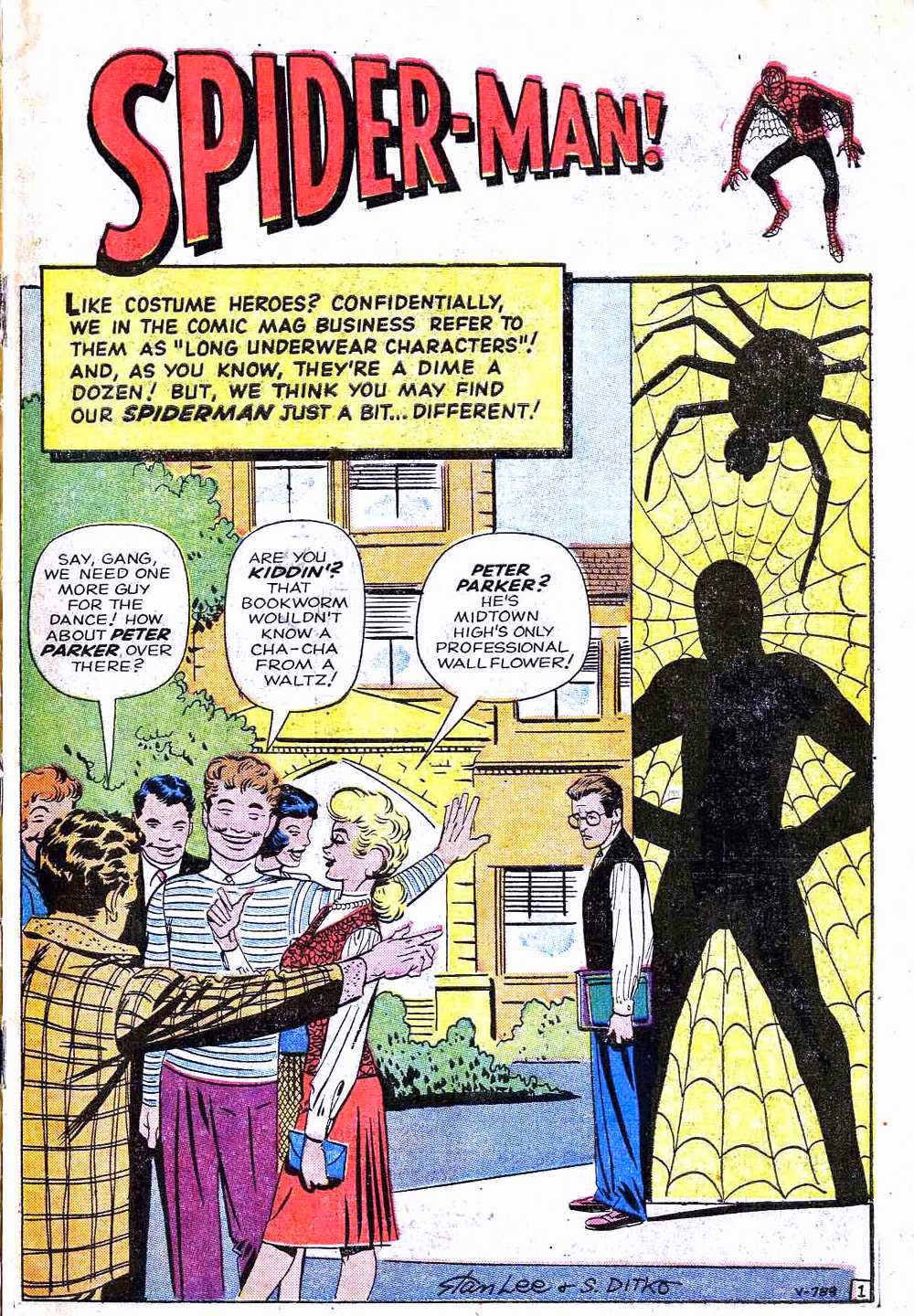 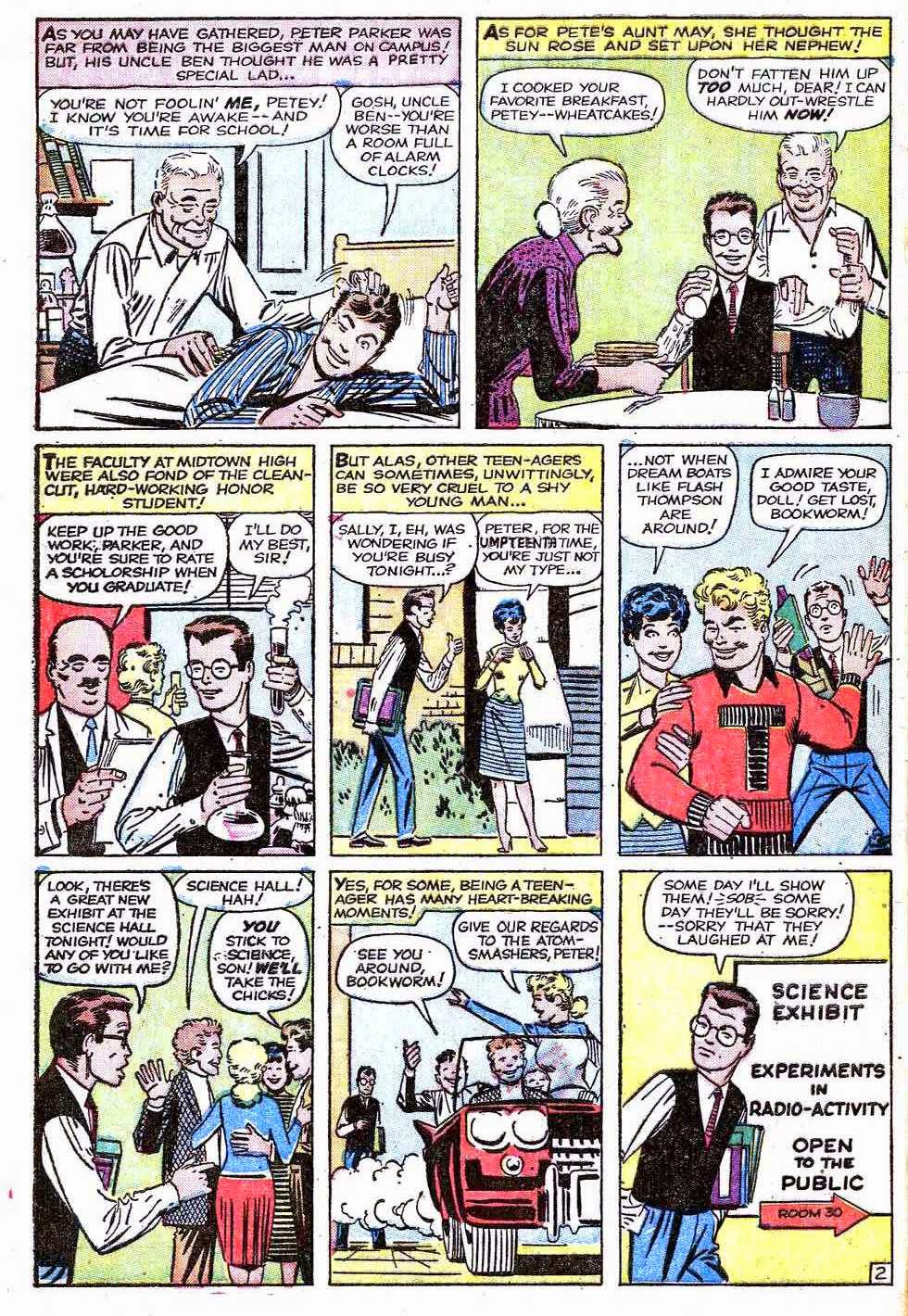 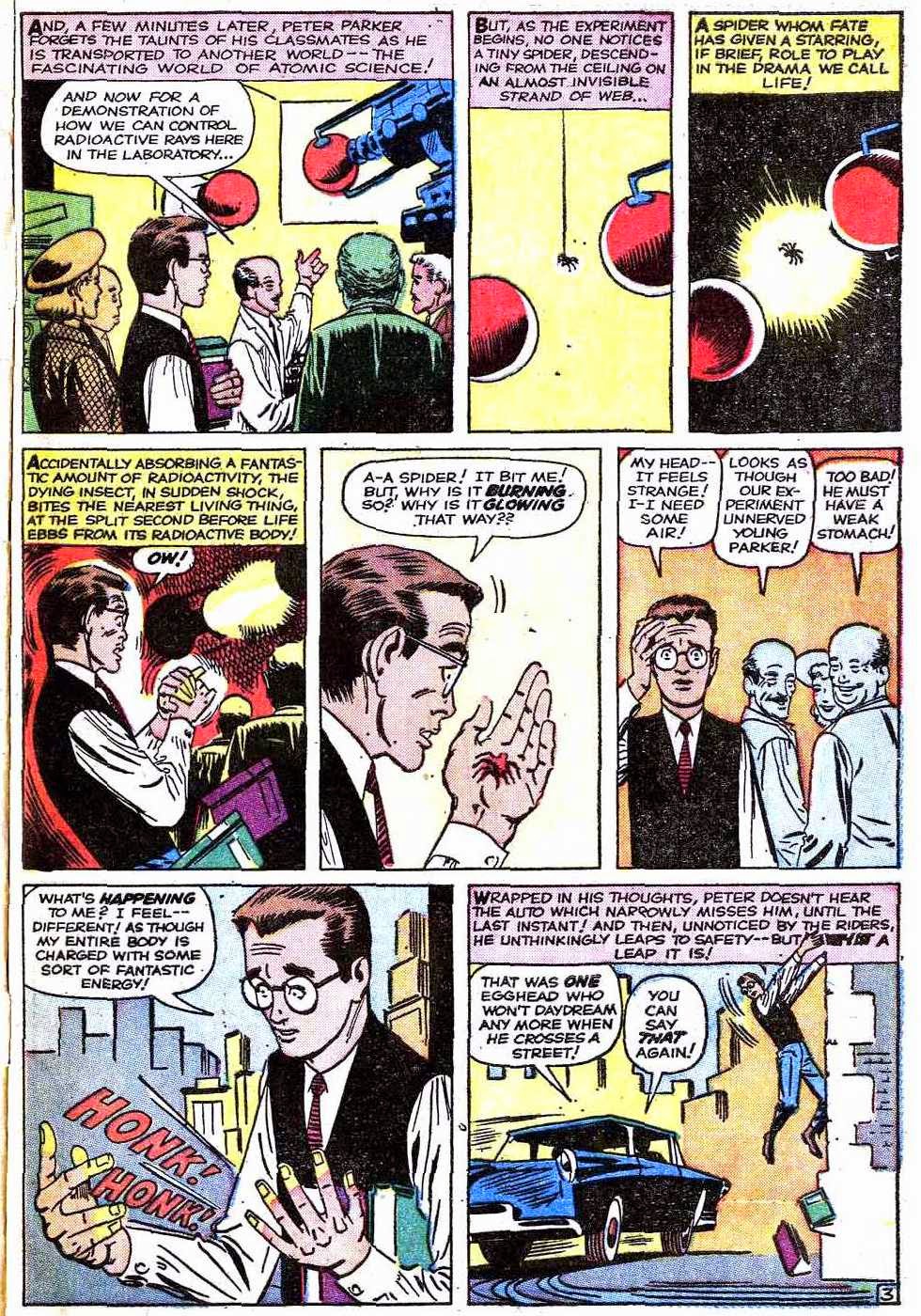 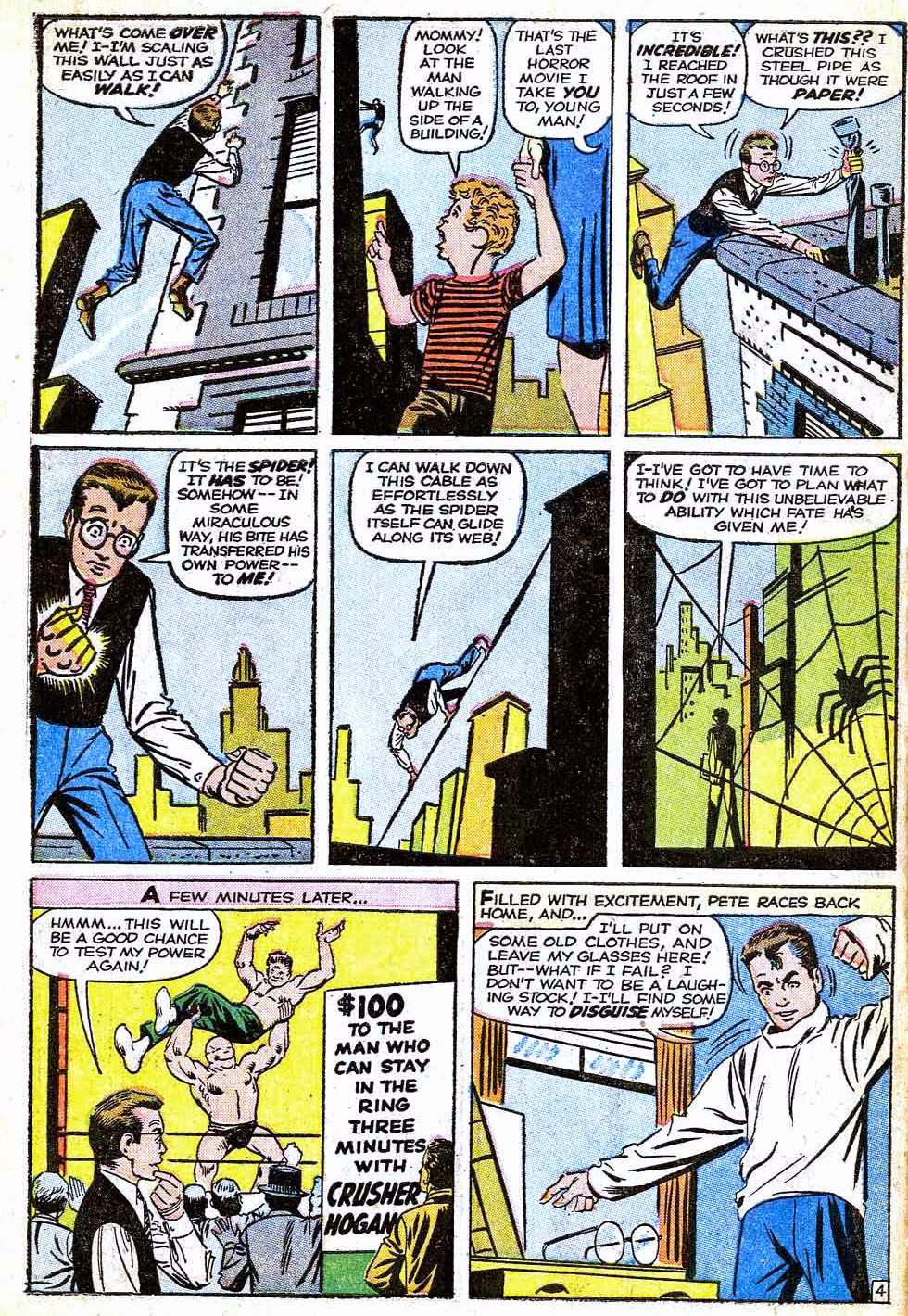 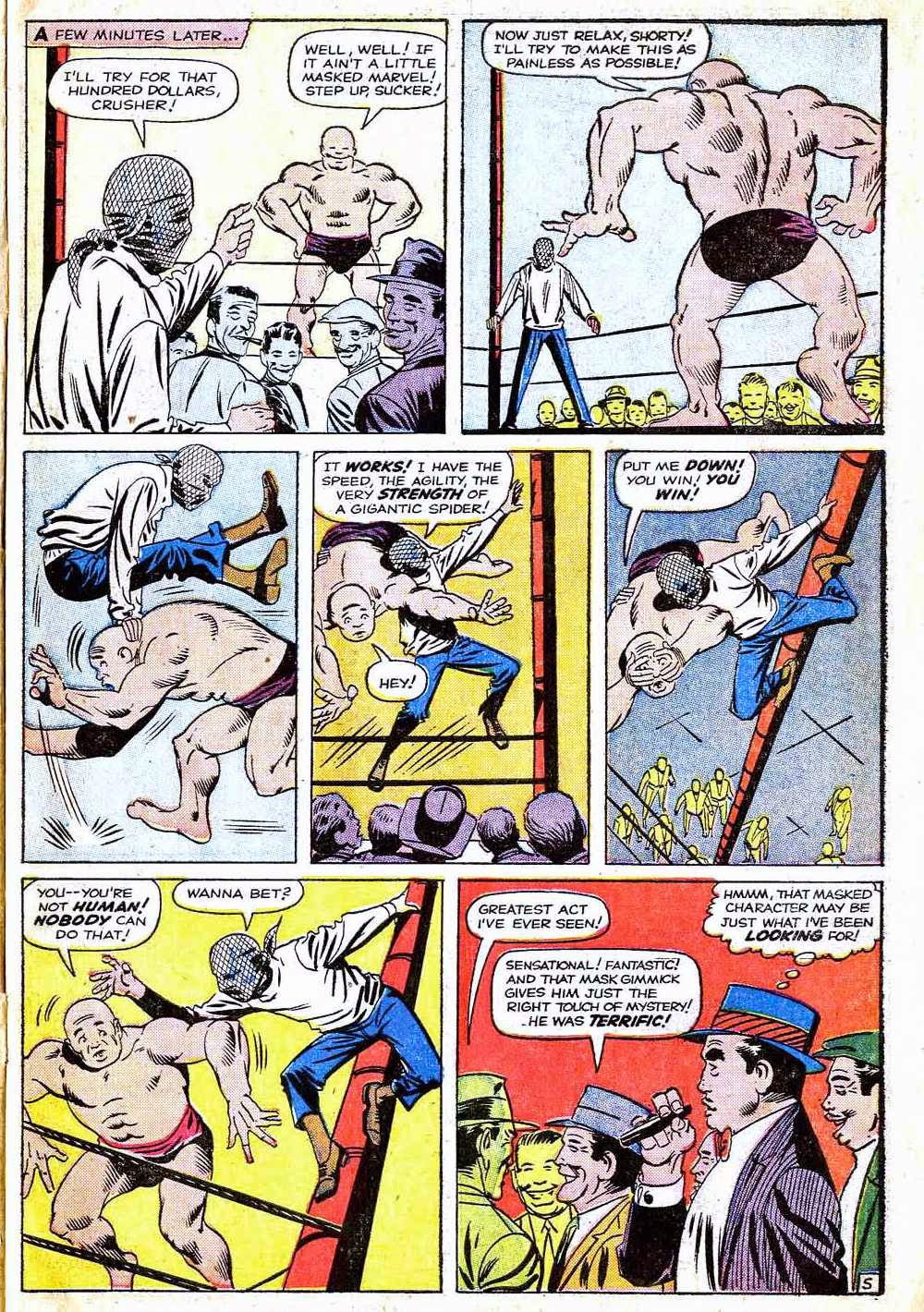 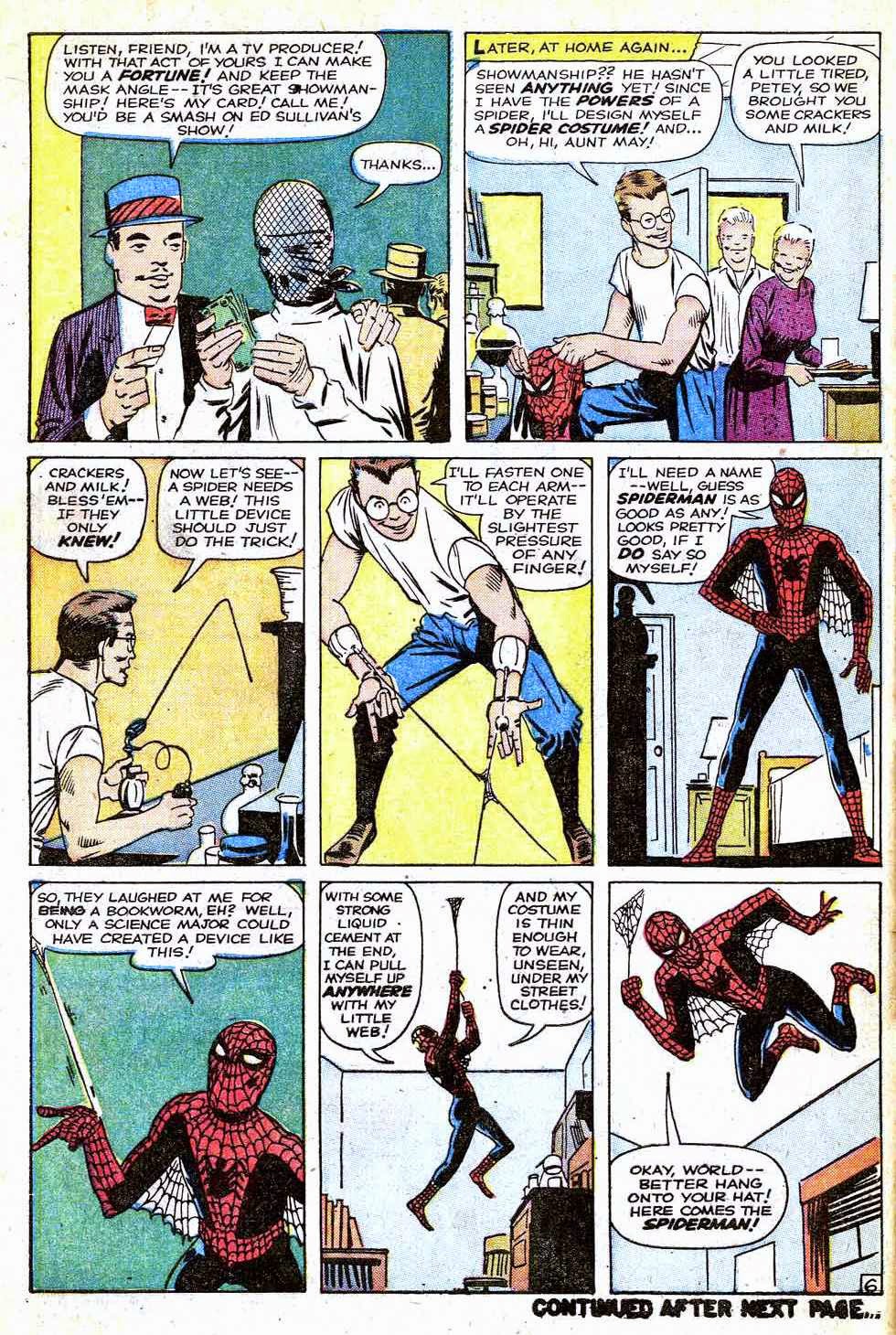 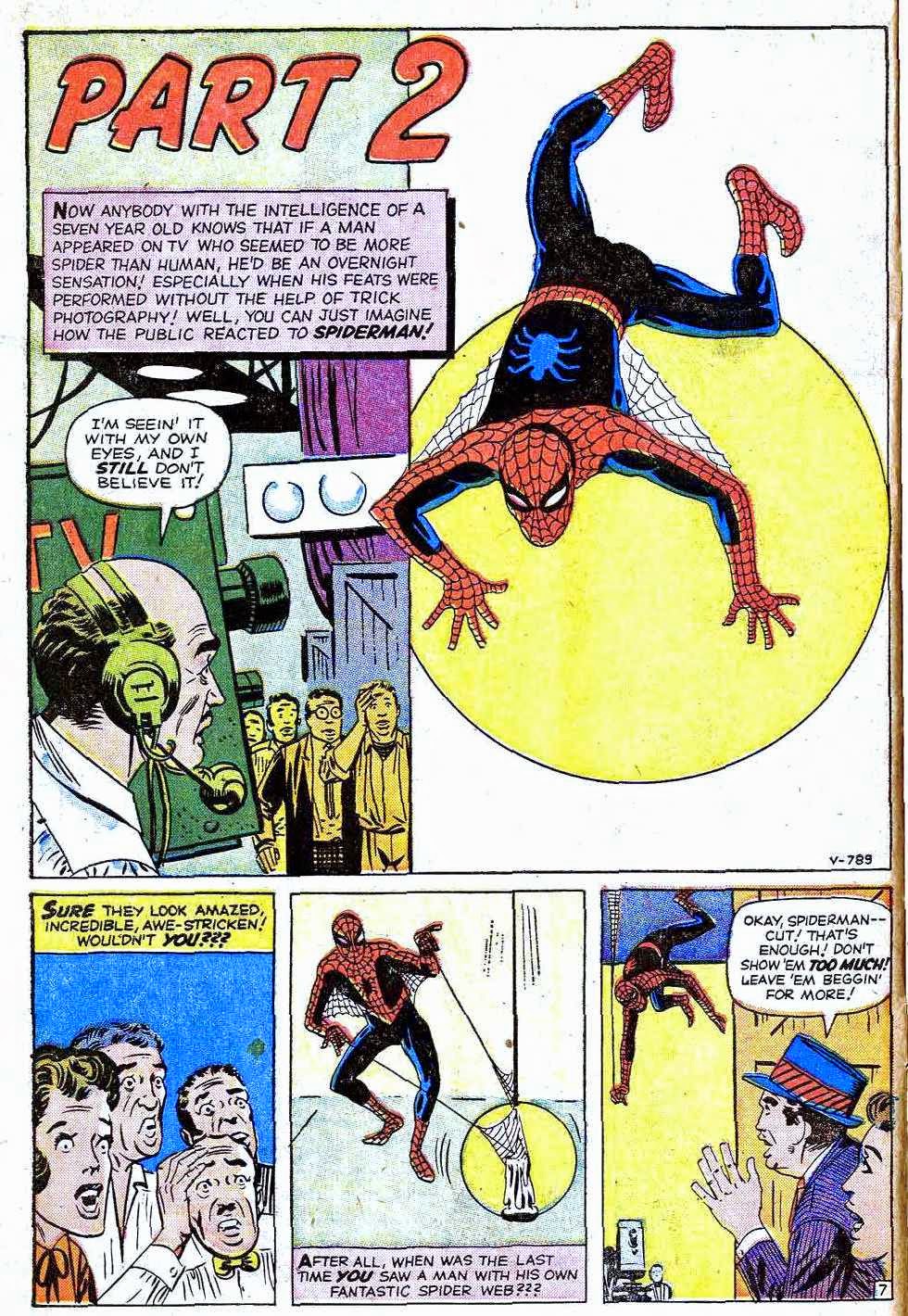 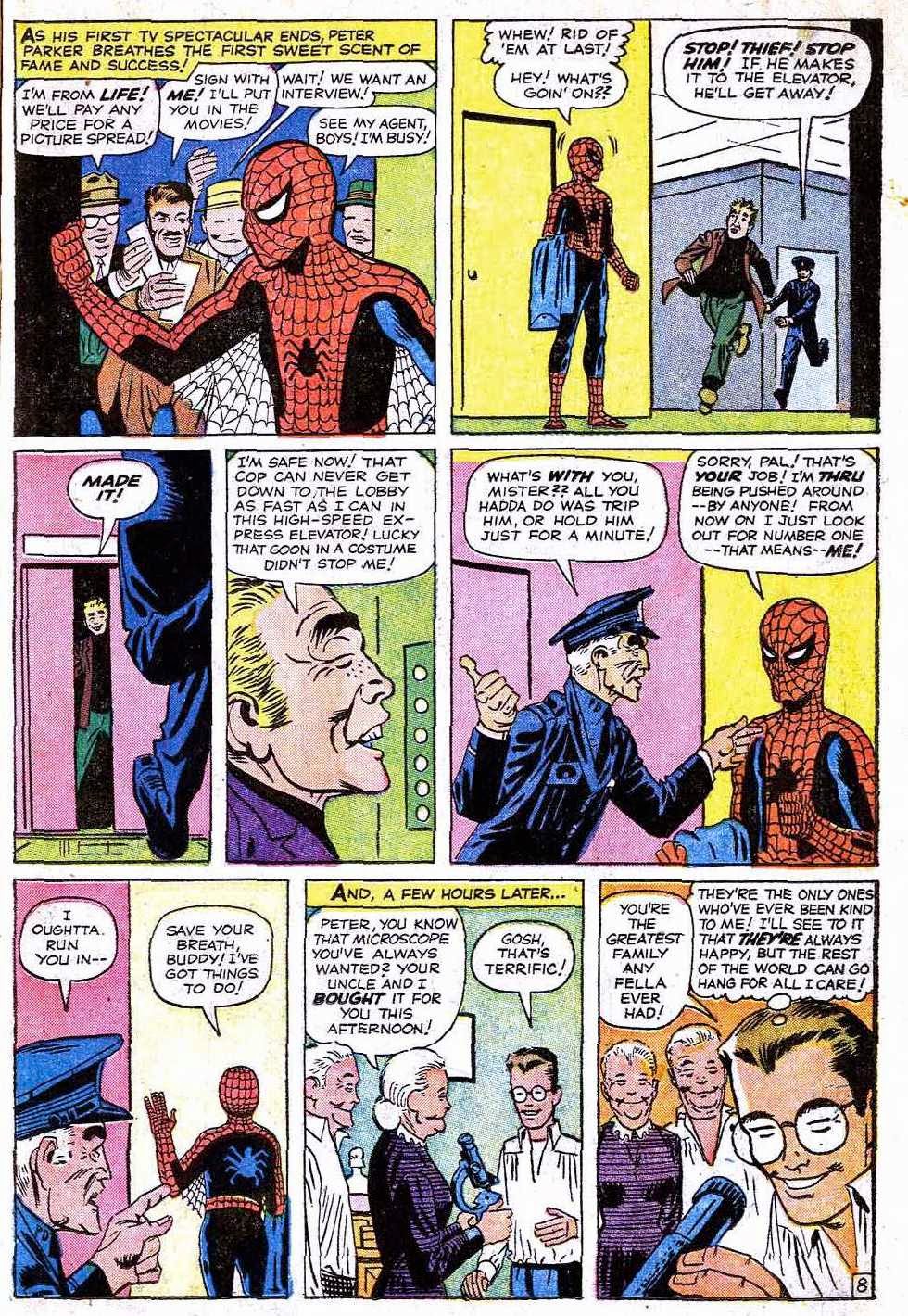 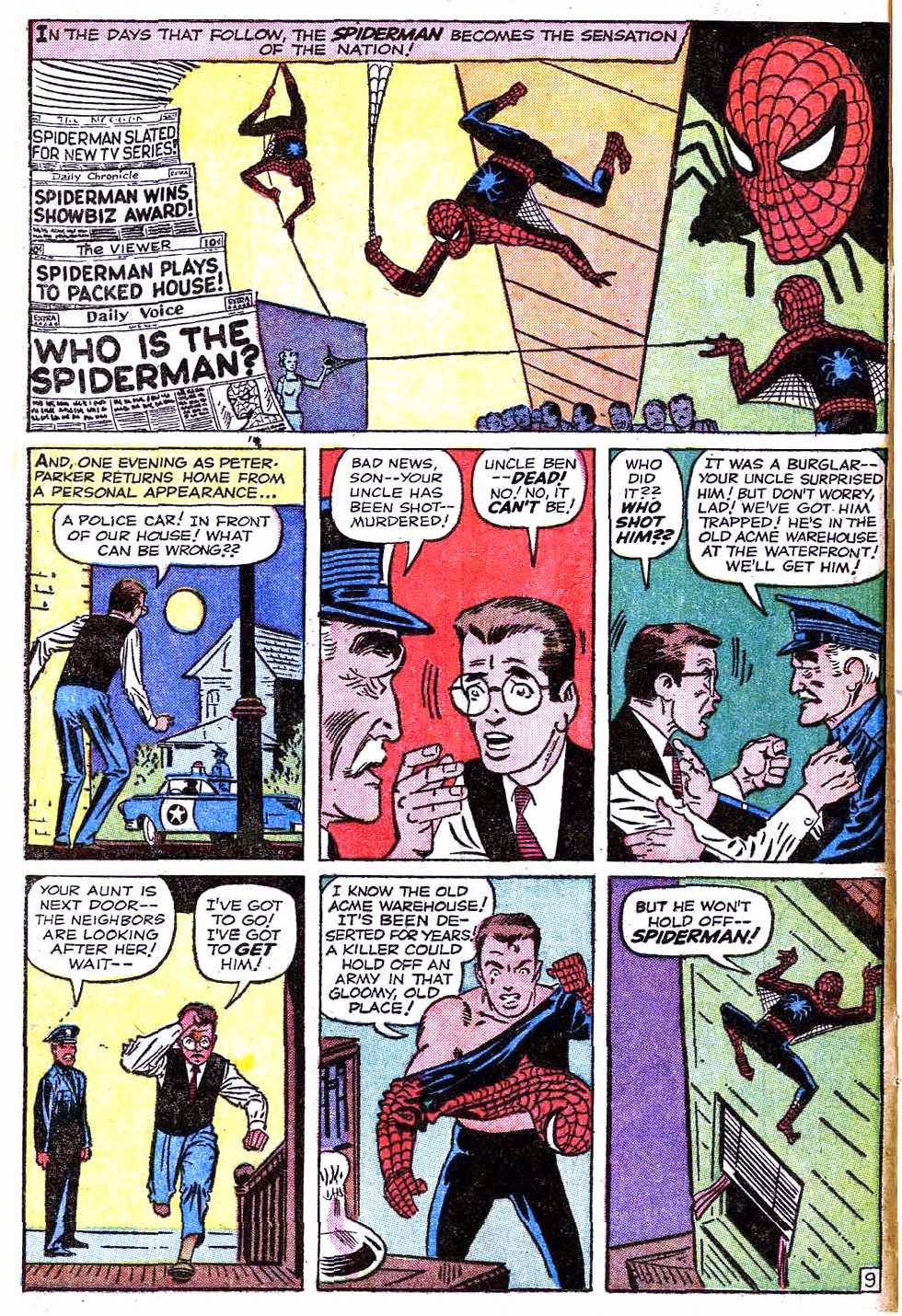 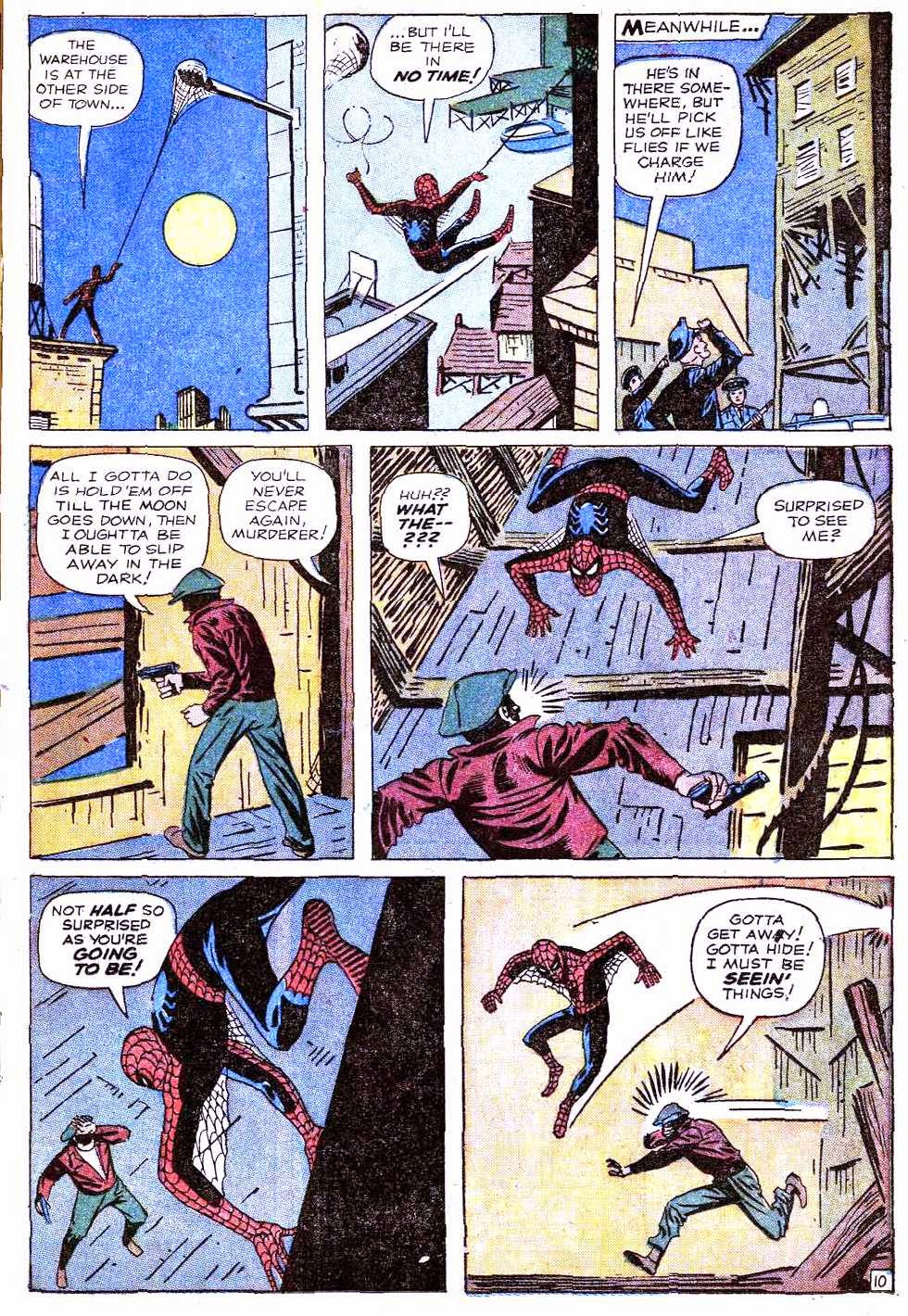 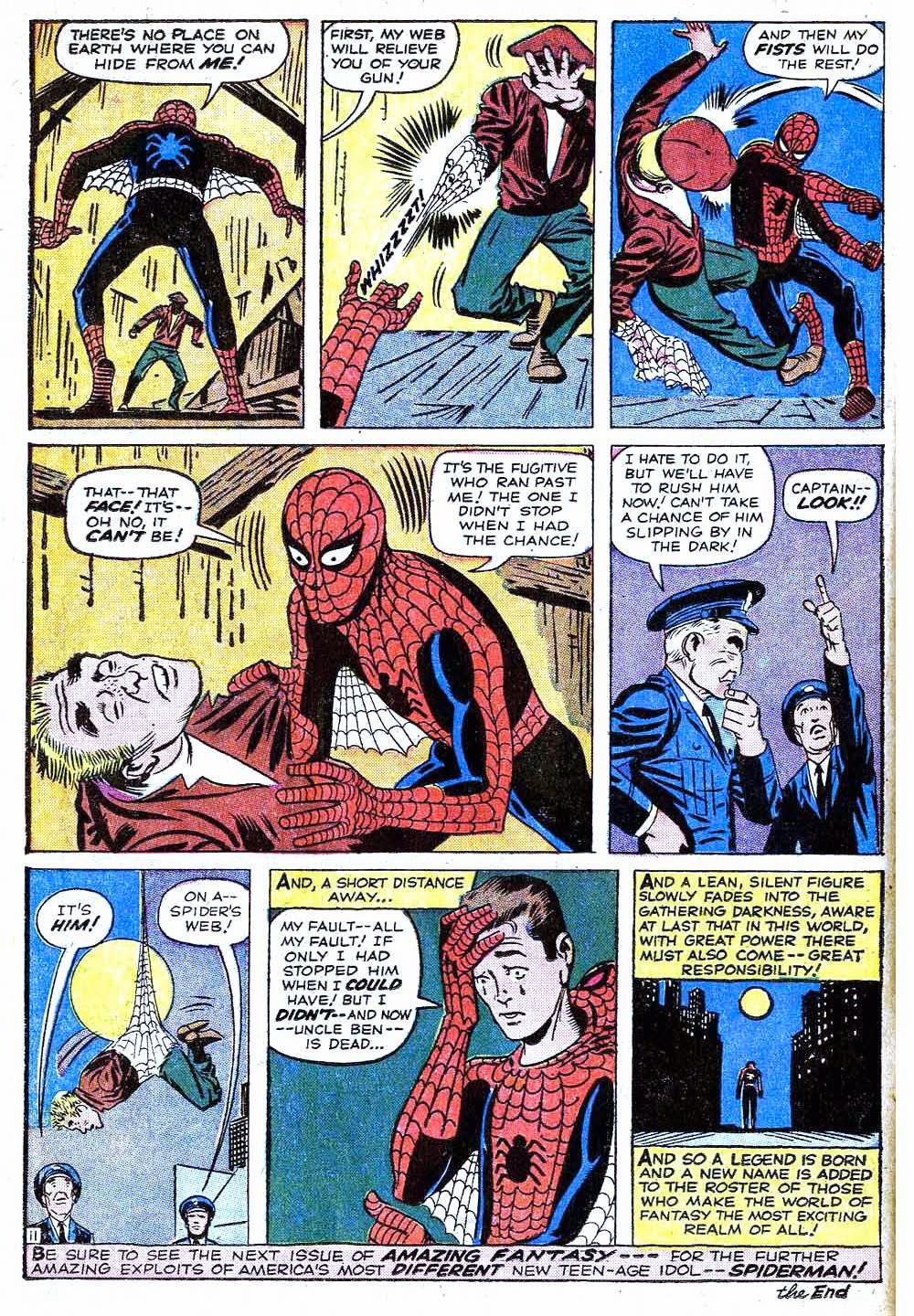 Heavy stuff.  Stan Lee's words in the final panel resonated deeply with me and still give me chills to this day.

"With great power there must also come great responsibility!"

It is probably surprising to hear today that Spider-Man almost never came to be.  Stan Lee had recently achieved great success with his creation and co-creation of characters such as the Fantastic Four, the Incredible Hulk, and the X-Men, one would think that Marvel would have trusted his creative instincts that had been translating into profits for the company.  However, when Lee proposed the concept of Spider-Man (reportedly inspired by his watching a fly climb up a wall) the idea was met with rejection.

Marvel's publisher at the time believed that readers would be disgusted by a character with bug-like powers.  Undeterred, and convinced that he had a great idea, Lee persisted.  Noticing that many of Marvel's readers were teenagers, Lee further suggested a teen-aged hero that the readership would relate to.  This was considered ridiculous as well since most teenage characters at the time were minor characters or sidekicks of established heroes at best.

But, with Amazing Fantasy declining in sales and being on its last legs, Stan Lee finally convinced the publisher to allow him and artist Steve Ditko to do basically whatever they wanted in one of the comic's final issues.  Thus, seeing little risk in the venture the publisher allowed Spider-Man's debut to finally be printed.  And, as they say, the rest is history!  Spider-Man was a huge hit with readers who became enamored with the the web-head's strange powers and, more importantly, Peter Parker's realistic characterization. Spider-Man was soon given his own ongoing series, going on to become the web-slinging, wall-crawling phenomenon we know and love today.

I digress. Getting back to middle school me:

By the time the reprint reached my hands and I read that first Spider-Man story... I was hooked.  As if I wasn't addicted to comic books already!  The origin of Spider-Man remains one of my favorite comics to read and reread.

Of course, adding to my fascination was my discovery that this was the 15th issue of Amazing Fantasy, which just so happened to be printed in August...

In my young mind I was convinced that there was some kind of deeply profound significance in the perceived fact that I shared my birthday with Spider-Man!
Posted by Jonathan Brinson at 8:26 PM