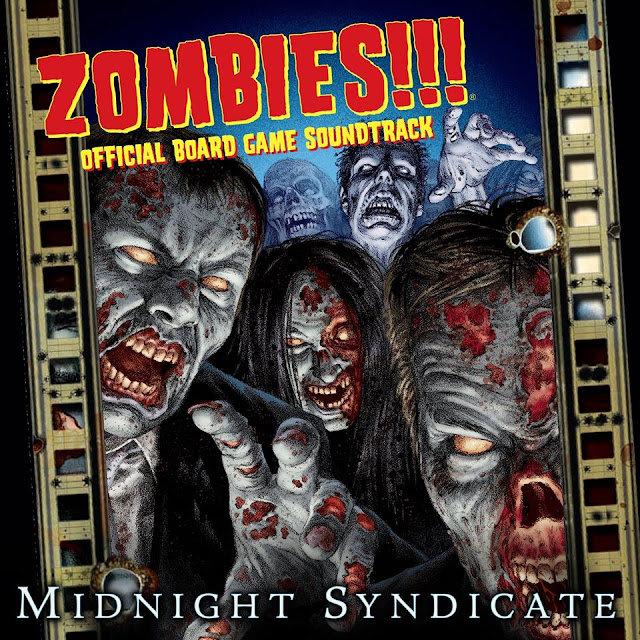 Midnight Syndicate is back!  With their amazing holiday album - "Christmas:  A Ghostly Gathering" - being released late last year, I wasn't expecting another album so soon.  However, with the group's reputation of churning out quality horror-themed works on a regular basis, it really shouldn't have been so surprising.

The new album is actually a soundtrack for the "Zombies!!!" board game produced by Twilight Creations.  The game apparently has quite a following, being first introduced back in 2001 it has went on to have 13 expansions released since then.  While I am somewhat embarrassed to admit that I've never sat down and played the game, I have came across it countless times at comic stores and conventions.  I have always appreciated the artwork that accompanies the game and almost purchased it on several occasions based on the artwork alone! 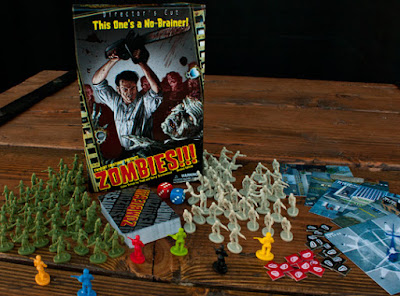 Therefore when I heard that this series was going to basis of the latest Midnight Syndicate project, I was very excited!  However I will admit that I also had some reservations...  Since I became familiar with the group, I have associated Midnight Syndicate with the Gothic pieces they have produced.  The albums I'm most familiar with seemed to have a classical vibe in keeping with the classic, archetypal subject matter of haunted houses, vampires, and Victorian era ghosts.  Their music feels in many ways like it's from another time, while "Zombies!!!" series seems to have more of a modern vibe, paying homage to Romero's "Living Dead" films.  I worried, I just wasn't sure that Midnight Syndicate's music would be a good fit.

I should have known better.


While the music has a distinctly different texture, the fingerprints of Midnight Syndicate are all over the album.  In keeping with "Zombies!!!" general aesthetic, the music wouldn't be out of place in a B-movie zombie film.  That sounds like an insult, but that's actually a great compliment.  As is often the case with Midnight Syndicate, they find a way to bring something fresh to the table and manage to reinvigorate even the most tired of horror tropes.

Some of the pieces are generally creepy.  Through the combination of sound effects and sparse atmospheric cues, I had to look over my shoulder more than a few times to make sure I wasn't actually being stalked by the undead.  For eample, check out "They're Coming for You..."


Like on "Monsters of Legend", Midnight Syndicate continues the tradition reworking some of their older pieces into new albums.  For example, "I Don't Think They're Dead" is another version of "The Witching Hour" and "Veiled Hunter" - possibly the most catchy track - was originally released on 2005's "The 13th Hour", but it works great within the context of "Zombies!!!"


One of the things that I have always felt that sets Midnight Syndicate apart from other artists within the genre is their ability to incorporate actual hum-able melody into their pieces.  While most would opt for percussion-heavy music with haphazardly piercing violin shrieks or something of that sort, Midnight Syndicate recognizes that melody matters, and even on "Zombies!!!" this comes to the fore and defines many songs.


With this being an album meant to serve as a soundtrack to the "Zombies!!!" board game I think that this collection is a success.  I may have to finally get around to purchasing the game!  However, even for anyone with little interest in the board game, I can honestly say that like all Midnight Syndicate's work this is a great album for getting into a spooky mood and with Halloween approaching this would be a great accompaniment to your home-haunting activities.

Overall, I recommend "Zombies!!!" as highly as I do the other Midnight Syndicate albums I have reviewed up to this point.  The quality of their output is consistently amazing and I can't wait to hear what to hear what they conjure up next!
Posted by Jonathan Brinson at 3:15 PM