In describing their music, Midnight Syndicate have characterized their dark, moody work as "soundtracks for the imagination".  Monsters of Legend, one of the groups' most recent releases, certainly lives up to this lofty aspiration, while refining their craft and managing to break new ground!

I was actually introduced to the music of these amazing artists a long time ago, but I didn't even realize it at the time.  It wasn't until I began honing my monster-making skills to create my own Halloween display and was looking for something to set the mood that I stumbled upon their work and "rediscovered" their music. 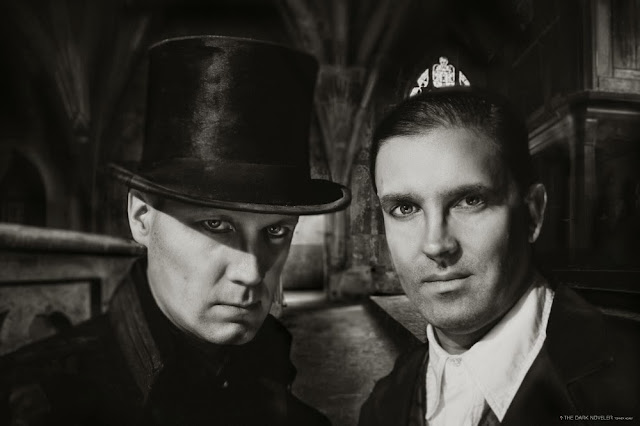 The group's albums have been a mainstay in Halloween attractions for years with most major professional haunts around the world using their albums in their shows.  In fact, according to Midnight Syndicate's website, it is estimated by an industry expert that "75-90% of the attractions in the haunted house industry owned at least one Midnight Syndicate CD".  I guess that would explain why I felt a such great sense of déjà vu when I listened to their music!

Midnight Syndicate has been creating Gothic music since 1997.  The award-winning group consists of composers Edward Douglas and Gavin Goszka.  Through the years, Midnight Syndicate has developed 18 albums, including soundtracks for three films and an album meant to accompany the role-playing game Dungeons and Dragons.

The majority of these collections, however, exemplify what Midnight Syndicate is best known for:  Mood-establishing music that tells a story.  Described as "scores for imaginary films", each album has a different foreboding theme and locale with albums set in a haunted mansion, abandoned asylum, and supernatural circus.

With Monsters of Legend, Midnight Syndicate sought to pay homage to the classic horror films of Universal Studios and Hammer Films.  As always, Midnight Syndicate's subtle melodies establish an eerie mood from the outset.  This time around, however, their sound is punctuated by symphonic embellishments and a deeper resonance, giving each piece an appropriately cinematic tone.  The understated melodies provide some great goose bump-inducing moments while the epic orchestral flourishes make the hair on the back of your neck stand up.  As they have in previous albums, the group utilizes sound effects throughout their pieces, method that could easily derail a piece in less-talented hands, but the group somehow manages to use these effects at the most effective moments, further enhancing their story-telling by generating imagery in the listener's mind.

Midnight Syndicate prove once again that they definitely know what they are doing.  Through the music, one can easily envision classic scene's from classic horror films...  Carriage rides to ancient castles where vampires reside, victims evading bloodthirsty werewolves in foggy moonlit forests, mad scientists working feverishly to give life to monsters cobbled together from corpses.  Indeed, the music creates a great atmosphere for concocting monsters of one's own... I'll admit, I find myself listening to this album on repeat as I work on Cryptic Corridor posts, regardless of the time of year!

It should be noted that Monsters of Legend was met with much well-deserved accolades and critical acclaim upon its release.  The album was named one of FEARnet's Top 10 Horror CD's of 2013 and earned the group a second Rondo Classic Horror Award for Best CD.


After rediscovering Midnight Syndicate through this amazing album, I have had the pleasure of meeting Edward Douglas on several occasions at various Horror conventions such as Scare-Fest and Mask-Fest.  Each time, Douglas was cordial and overflowing with enthusiasm, eager to talk about the group's music and upcoming projects. 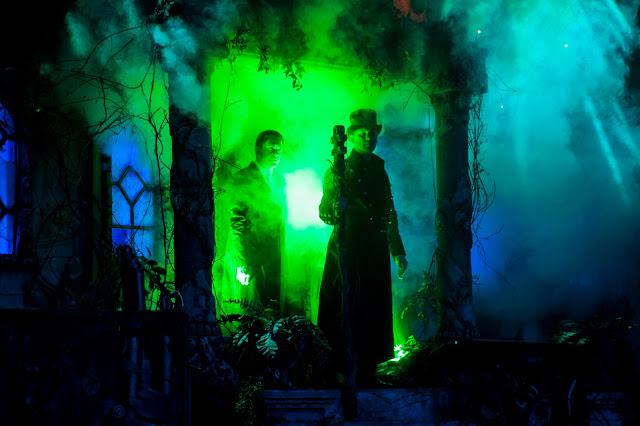 One such project was Kickstarter campaign Midnight Syndicate created around the time Monster of Legend was released.  The goal of the fundraiser was for the group to go on tour and share their music with live audiences.  I was disappointed to find that that particular project fell through, but was later delighted to find out that the group was invited to create a live show for Cedar Point amusement park, called Midnight Syndicate Live:  Legacy of Shadows.  The show features a live music concert with elements of horror theatre.  I hope to one day be able to attend this show!

Another exciting project is the follow-up to Monsters of Legend, a Christmas/Winter Solstice-themed album -  Christmas:  A Ghostly Gathering - released earlier last month (which I'll make a special post on as we near the holiday season).  I'll admit to this:  I'm not a big fan of Christmas music, especially not in season, but I've had to force myself to stop listening to it while I work on my Halloween projects to save it for the winter months!

You can find out more about Midnight Syndicate and purchase music on their website.
Posted by Jonathan Brinson at 9:27 PM