Gary Larson's "Tales from the Far Side" 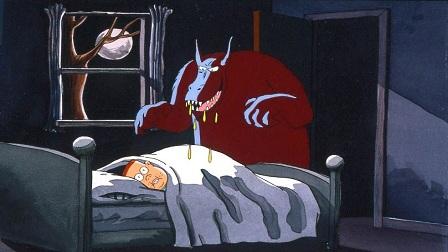 It's a crime that this isn't broadcast annually along with the other Halloween specials...

Tales from the Far Side originally aired on CBS in 1994.  As far as I know, this is the only time Gary Larson's comic was ever animated.  Larson's dark humor is on full display in vignettes such as a farmer resurrecting undead livestock, arthropods enjoying an in-flight movie (until things go horribly wrong), and zombies hanging out on a dude ranch.  The music is as weird as you would expect and the animation for the characters and creatures are spot-on.

Growing up, I was disappointed year after year to find that this special was rarely replayed.  Perhaps it wasn't kid-friendly enough to be played along with the Charlie Brown and Garfield specials for some reason?

Thankfully, my ever-loving grandma taped it on a VHS so I could enjoy it over and over again whenever.  You know I wore that thing out!
Posted by Jonathan Brinson at 11:02 PM