Scary Stories to Tell in the Dark - The Audio Books! 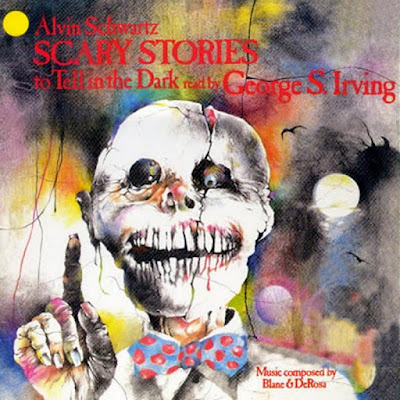 I wasn't aware of their existence until several years ago, but apparently the Scary Stories to Tell in the Dark series was also released in the form of audio books!  I can't imagine being much more terrified by this series, but if I had this in my possession back when I first discovered these books, I probably would never go to sleep again.  Knowing my younger self all too well, I just know I would have listened to this in my Walkman on some dark night only to end up a sweaty, sleepless mess huddled beneath my Jurassic Park bed-sheets.

George S. Irving (the voice of the Heat Miser from "A Year without Santa Clause" and the narrator of the original Underdog cartoon) alternates between kooky and creepy as he reads Alvin Schwartz's tales of terror.  Accompanying the scary stories is awesome synthesizer music created by Blane & DeRosa, the company that apparently produced the audio books.


The audio book version of Scary Stories to Tell in the Dark unfortunately omits several of the stories from the original book.

The recording of More Scary Stories to Tell in the Dark is presented unabridged.

I can't take the credit for creating the videos below, which appropriately feature the original illustrations, but I gladly thank whoever did!