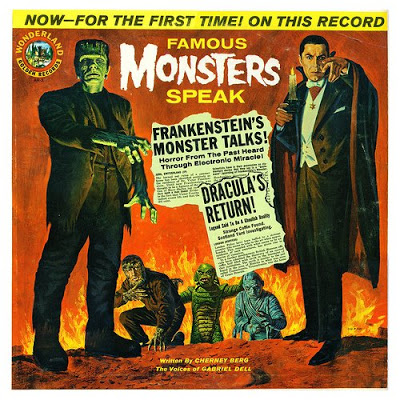 What a treat this must have been for the monster kids!!!

"Famous Monster Speak" was an album released in 1963.  Advertised, appropriately enough, in the back of Famous Monsters magazine and other Warren publications this record delivered on its promise:  Allowing the listener to hear Frankenstein's Monster and Dracula talk!

The album consisted of two stories - one on each side of the record - featuring each monster as the narrator.  Both stories are creatively framed by their own establishing plots.  For Frankenstein's Monster, a summit of scientists has gathered to listen to a "primitive recording device" which features the creature recounting his creation from his own perspective and his struggles against creator.  Meanwhile, Dracula's story is told when he summons a reporter to his lair to type up an expose' on his life as an immortal vampire. 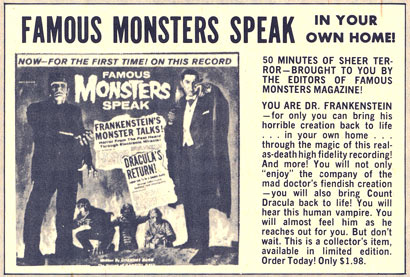 I particularly enjoy the artwork for the album with iconic images of both the Monster and Dracula.  Inexplicably, the Wolf Man, the Creature from the Black Lagoon, and the Mummy also share the spotlight despite not actually appearing on the record itself at all.

Overall, this is good listen if you enjoy the old radio dramas.  The voice acting is spot-on.  Gabriel Dell supplied the voices of both the Monster and Dracula.  His portrayal of the Monster appropriately alternates between menacing and tragic, while his Dracula maintains a consistently sinister tone (and without imitating Lugosi!).  The sound effects also help to set a great atmosphere for both the framing narratives and the monsters telling their stories.

I'm always on the look out for a copy of this record as I scour the shelves and racks of flea markets flipping through vinyls.  Maybe one day I'll luck out and actually track one down.

Posted by Jonathan Brinson at 11:40 PM