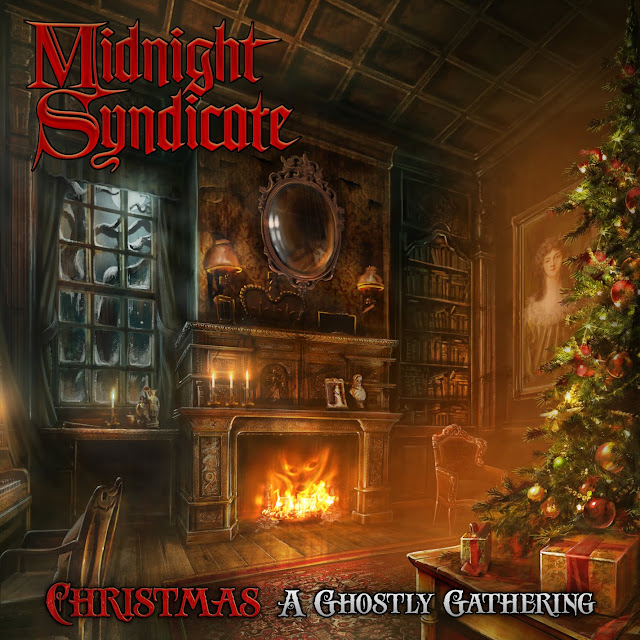 As December 25th draws nearer, too many of us find ourselves already out of the spirit of the season due to the onslaught of sugar-coated, nerve-grating music that is all but inescapable this time of year.  Thankfully, Midnight Syndicate's latest release presents a wonderfully welcome alternative...  A Gothic-inspired Christmas album that provides a slightly darker - but far more enjoyable - approach to holiday music.

It seems to me that the majority of Christmas albums typically tend to be either saturated with overtly put-on cheerfulness or completely devoid of any substantial musical value.  The very notion of a Christmas album is usually associated with the ho-hum of yet another cash-grab for flavor-of-the-month pop performers who are happy to phone-in unimaginative, haphazard covers of songs we've heard already lazily covered a million times over.

For this offering, the group alternates between original compositions and reworkings of classic Christmas songs.  As long-time fans would expect, the majority of the original pieces are unmistakably the work of Midnight Syndicate.  On these tracks the group does what they do best:  generate adventurously dark instrumentals thick with mood and a Gothic atmosphere.  "Winter Storm" is a particularly epic symphonic track that could easily have been a part of the group's previous release, Monsters of Legend.  Other notable original pieces include the gleefully devious "Little Helpers", the truly haunting "Into the Stillness", and the surprisingly heart-warming "Christmas at Midnight". "Night of the Krampus", an homage to the legendary Christmas devil of eastern European folklore, is of course one of my personal favorites.

However, the re-imaginings of the classic carols deserve attention as well!  One could easily imagine a self-described "Gothic Christmas Album" merely consisting of organs simply playing covers of well-known songs at a slower tempo to fit the label, but it is abundantly apparent that Midnight Syndicate was not going to be content with churning out a creatively lazy effort.  Instead, each of these reworkings offer something different and refreshing and are true re-imaginings of the Christmas songs you've heard so many times before.

Older, more traditional songs that have been around for over a century (or longer) such as "Coventry Carol", "Greensleeves", and "Carol of the Bells" almost naturally lend themselves to a dark reworking.  But Midnight Syndicate also take on cheerier tunes such as "Up on the Housetop" and twist them into something you might expect to hear on the soundtrack for a horror film.

While the group does indeed take a darker approach, that isn't to say that the album isn't to say that the album is a completely grim in tone or lacking of any kind cheer associated with the Christmas season.  Quite the contrary, there are more than a few moments of what I can only be describe as genuine Christmas joy and wonder!  "Sing We Now of Christmas" is simply majestic sounding (I imagine climbing some moonlit snow-covered peak while listening to this piece). The group's rendition of "God Rest Ye Merry Gentlemen" caught me totally off guard...  For a moment I forgot that I was listening to a Midnight Syndicate record and got swept up in the majestic awe captured on the track.

The final verdict:  Midnight Syndicate's Christmas:  A Ghostly Gathering is a Christmas album that defies the conventions of holiday music flooding the airwaves this time of year.  Bursting with creativity and imagination, this collection of original pieces and dark re-imaginings of classic carols are a perfect alternative for anyone looking for a truly unique listening experience this holiday season.  Who would have guessed that a group known for creating Halloween music would be so successful in breathing new life into Christmas songs?

You can find out more about Midnight Syndicate and purchase albums such as Christmas:  A Ghostly Gathering on their website.
Posted by Jonathan Brinson at 11:10 PM