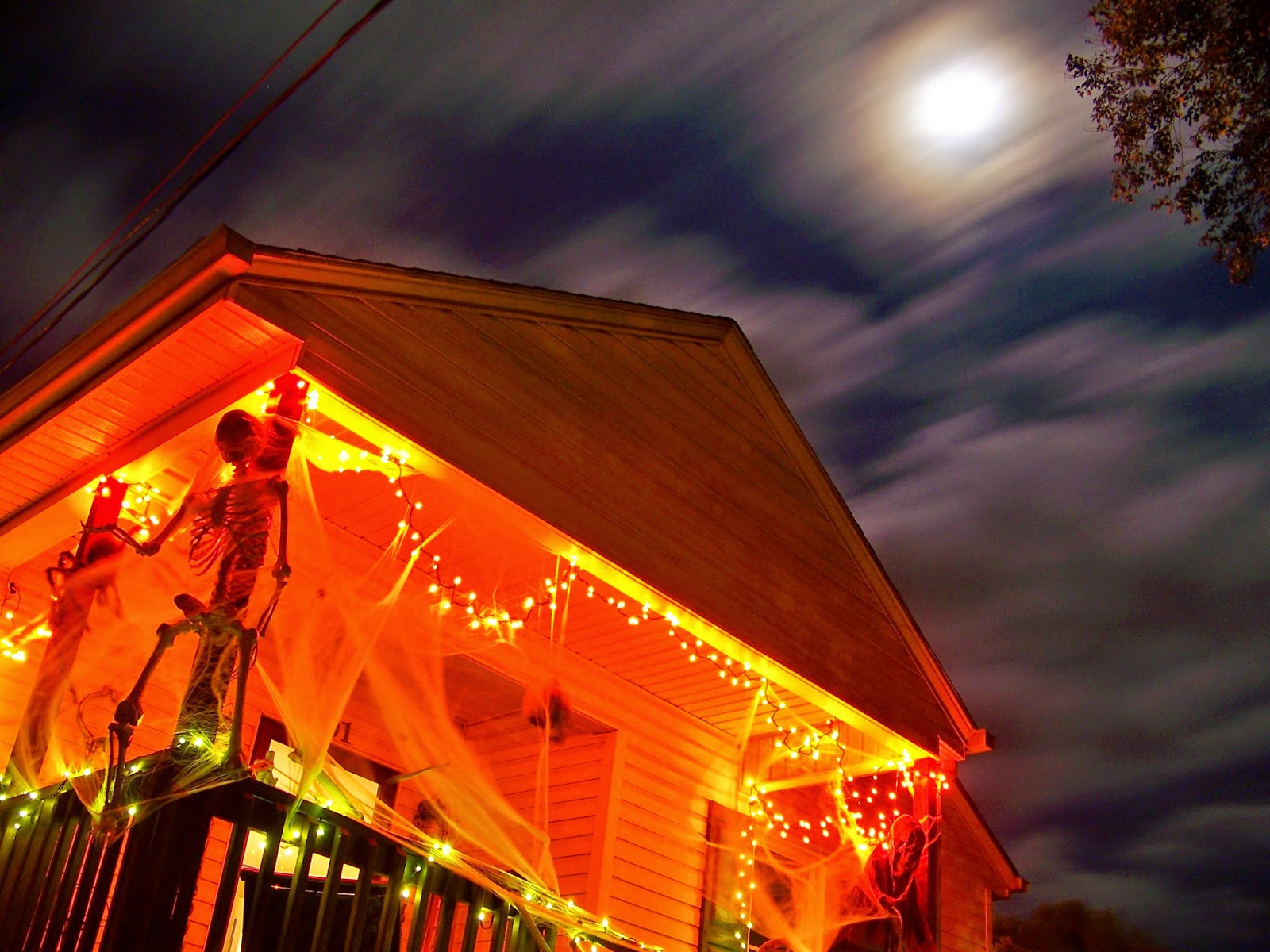 It's been a while since I posted an update on my Halloween projects, but I promise you I haven't been sitting on my thumbs.  Above is a picture I took of the front porch during the last Full Moon which turned out looking very spooky I think.

I'm sorry to say that pretty much all I've gotten set up for my front yard display so far is some spiderwebs, the Grim Reaper you can't really make out in the picture, and - one of my favorite new purchases - a 5 foot tall poseable skeleton.

I would put out more, but the weather has been very rainy here lately.  I'd hate for any of my props to get ruined, so I've got them set up all around the inside of the house, much to my wife's delight!  Actually, she doesn't mind.  She's awesome that way.

The real reason for this post, however, is to present my newest prop:  an animatronic cauldron-stirring witch I call Hagatha Christie! 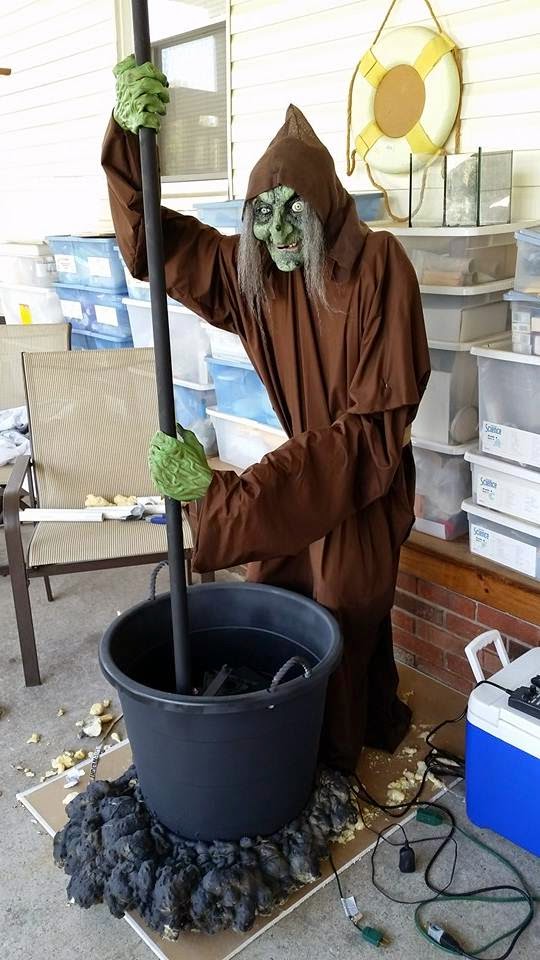 Hagatha is the by far the most complicated prop that I've attempted so far.  She was made using PVC pipe and chicken wire, like my other props.  The mask I used, called Bruja in most online stores, was made by Ghoulish Productions.

Unlike my other props, Hagatha is animated, which required a lot of help from one of my friends who is much more mechanically inclined that I. I'll attempt to explain our process:  We mounted a windshield wiper motor to a wooden base placed inside the cauldron and connected a metal attachment to the motor for the witch's staff to rest upon.  As the motor turns the the attachment the witch's staff moves as if it is stirring the cauldron.  The top arm is stationary and merely holds onto the staff as the lower arm marionette-like and moves along with the staff, which completes the effect marvelously.  I wish I could take the credit for the genius behind this prop's design, but sadly, I cannot.  This type of prop is called a "cauldron creep" and you can find more detailed instructions here.

Once the animation mechanism was complete I had some more help, this time from my aunt who assisted me in tracking down fabric that matched the hood on the witch mask.  She also helped me make a robe for the witch to cover the up the PVC pipe and chicken wire armature.

The completed prop looks much, much better at night... 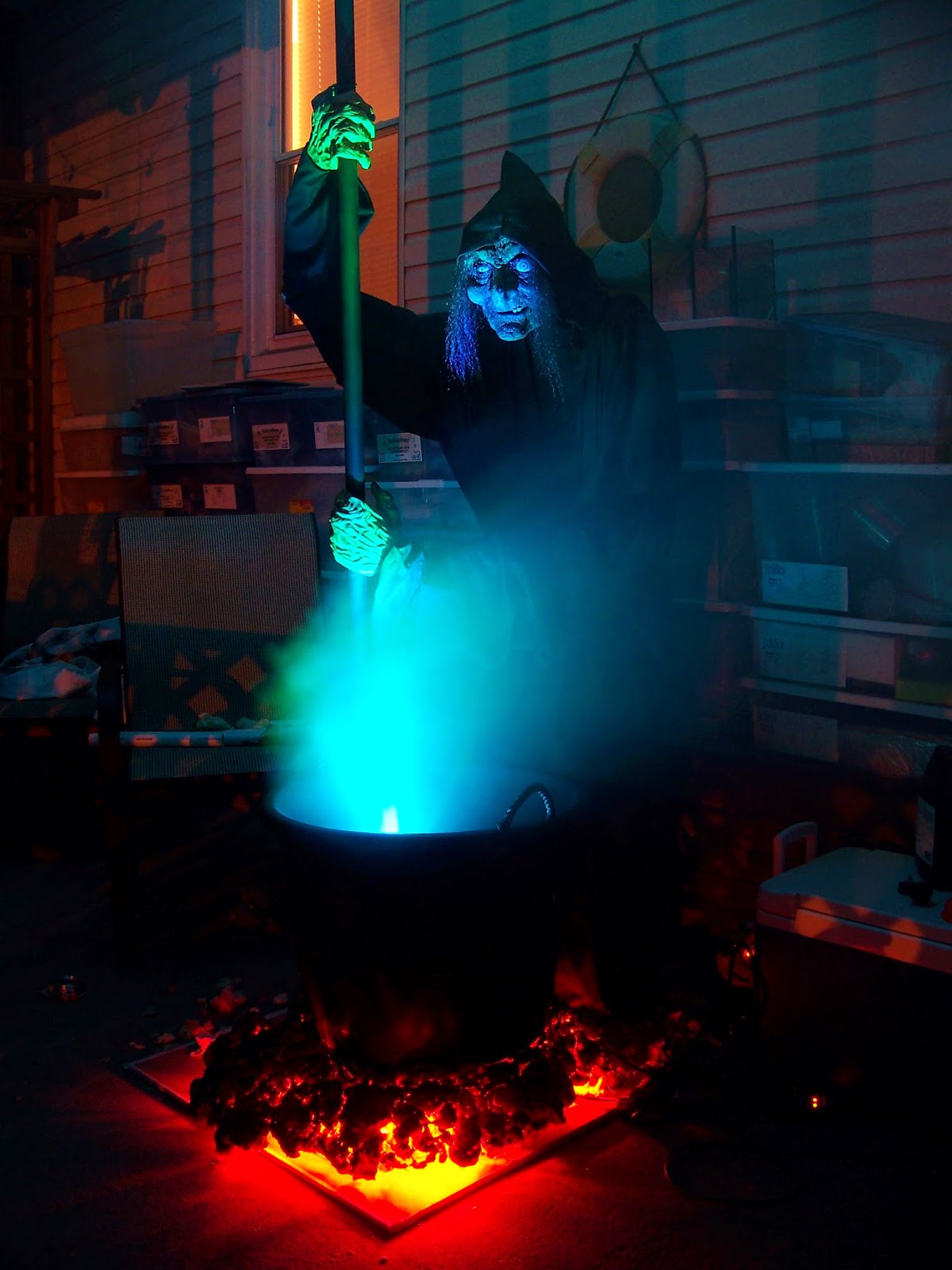 The coals beneath the cauldron were made using Great Stuff spray foam insulation which adhered itself to a chicken wire frame attached to a wooden stand the cauldron rests on.  I painted the foam black and wired some flickering Christmas lights underneath to get a burning effect.  It looks great at night (although not such much during the day).

Inside the cauldron is a small fog machine hooked up to timer that allows the fog to spurt out at a regular interval, making it appear as if the contents are steaming.  A color changing LED spotlight illuminates the witch from below.  With her eyes looking directly at you as she stirs the cauldron, it's kind of unnerving and very creepy. 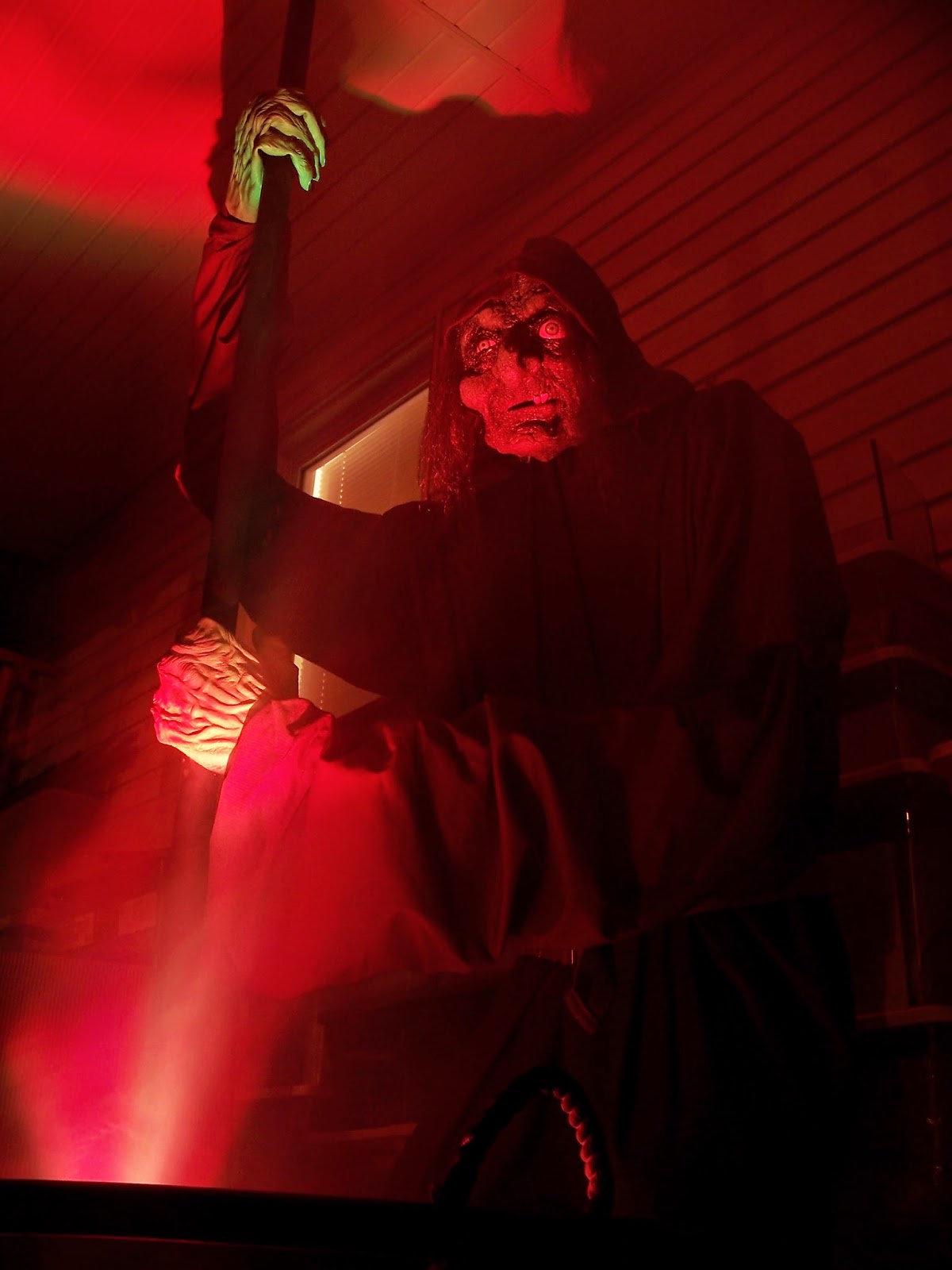 After spending so much time working to complete Hagatha, I'm not sure whether or not I will be able to complete the last prop I planned on building this year.  Even if I don't I'm pretty pleased with what I've done so far.  The trick-or-treaters are going to love it I think!

Halloween is almost a week away...
Posted by Jonathan Brinson at 11:15 PM