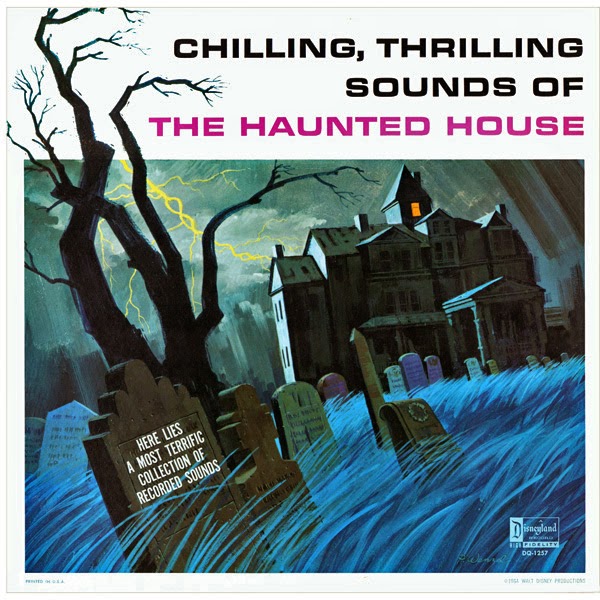 My sister and I used to beg our mother to let us listen to her record player.  She has a great collection of classic rock albums...  My parents have great taste in music!

However, inevitably, the record we always ended up giving a spin was Disney's Chilling, Thrilling Sounds of the Haunted House.  Of course we had to turn out the lights to set the proper mood.  Then we would sit there in the dark listening to the spooky noises until the record stopped (which, to me, was always the most terrifying sound!).

Released in 1963, this album consists primarily of sound effects apparently drawn from Disney's archives.  Many of the ghostly groans and screams are recognizable from their library of classic movies and cartoons such as 1937's Mickey Mouse cartoon The Lonesome Ghosts.  As far as I can tell, this record is in no way associated with Disney Land's Haunted Mansion ride, aside from the fact the album artwork was created by that attraction's concept designer, Paul Wenzel.

Side A of the record is broken into narrated segments that incorporate the various sound effects.  Oddly enough, these have very little to do with the "haunted house" theme, aside from the opening track.  For example, the remainder of the album includes sounds of a lumberjack chopping down a tree and subsequently being crushed, an explosive fuse being lit, someone crossing a rickety bridge, Chinese water torture, and a UFO landing.  The creepiest tracks are probably the sounds of a pack of wild dogs and a Hitchcokian flock of killer birds.  Side B consists of many of the same sound effects without the narration.

Posted by Jonathan Brinson at 10:48 PM