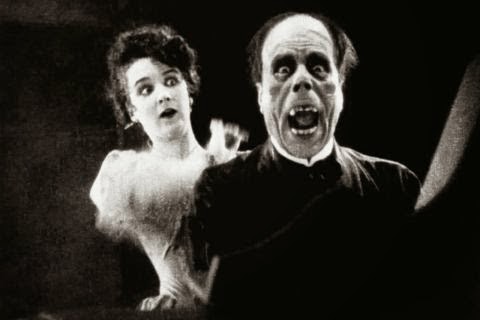 Following the success of The Hunchback of Notre Dame in 1923, Universal began to plan the production of another epic spectacle.  In 1925 the studio released their silent adaptation of The Phantom of the Opera. 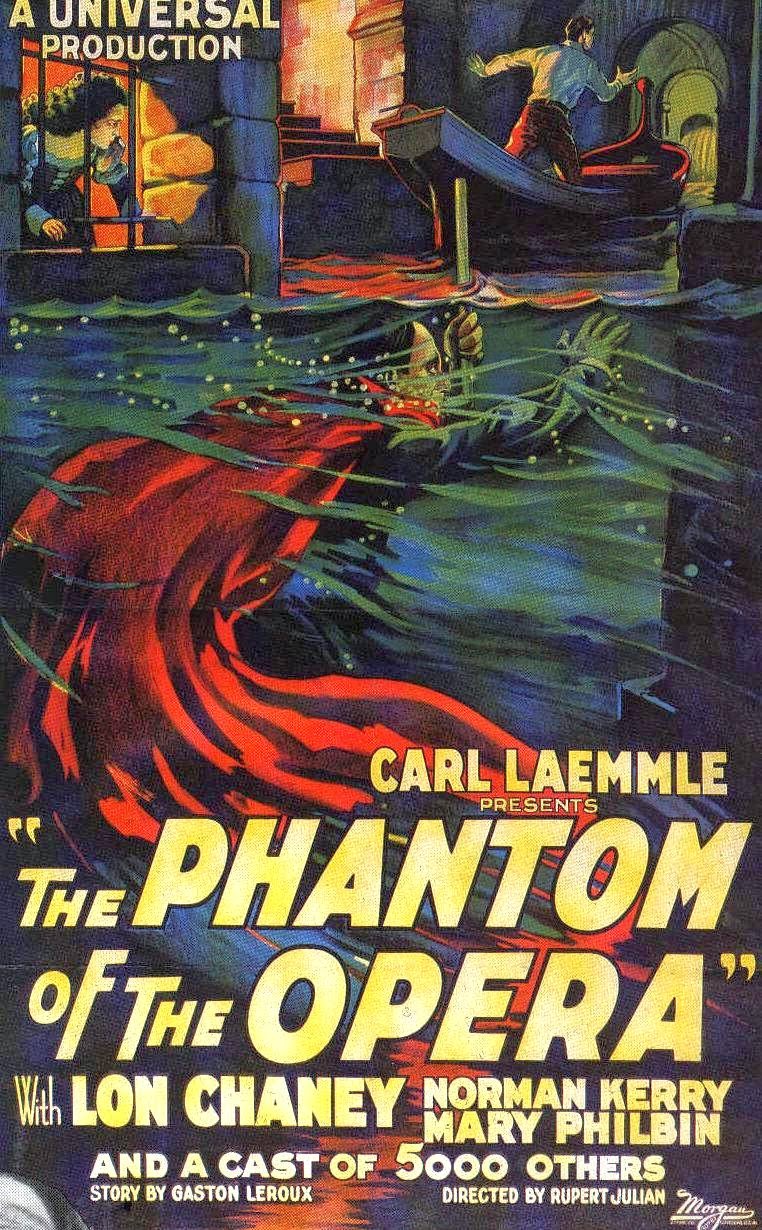 The Phantom of the Opera is based on the novel of the same title by Gaston Leroux.  Taking place in the Paris Opera House, the story begins with the new owners scoffing at the legend of "The Phantom"... until a mysterious figure is witnessed making a startling appearance in Box Five before vanishing. 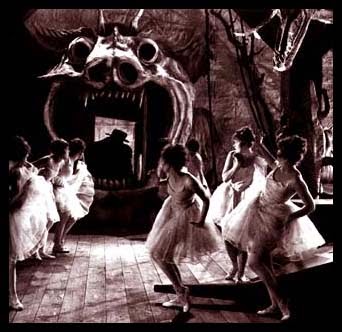 The shadow of the Phantom is witnessed stalking the backstage area by many of the workers who nervously exchange rumors.  The owners then begin receiving letters from the Phantom, demanding that they give the lead role in the opera to the young Christine.  The managers refuse which prompts the Phantom's wrath.  The Phantom ends up dropping the opera house's huge, grand chandelier, crushing numerous patrons.

Thus, Christine is given her moment in the spotlight during the next performance.  She puts on an amazing performance and receives a standing ovation from the crowd.  Raoul, Christine's fiancé, awaits outside her dressing room to congratulate her but is stunned to find that she has disappeared.  It is revealed that Christine has been receiving music lessons from a mysterious voice for years.  This "voice" turns out to be that of the Phantom, who captures Christine. 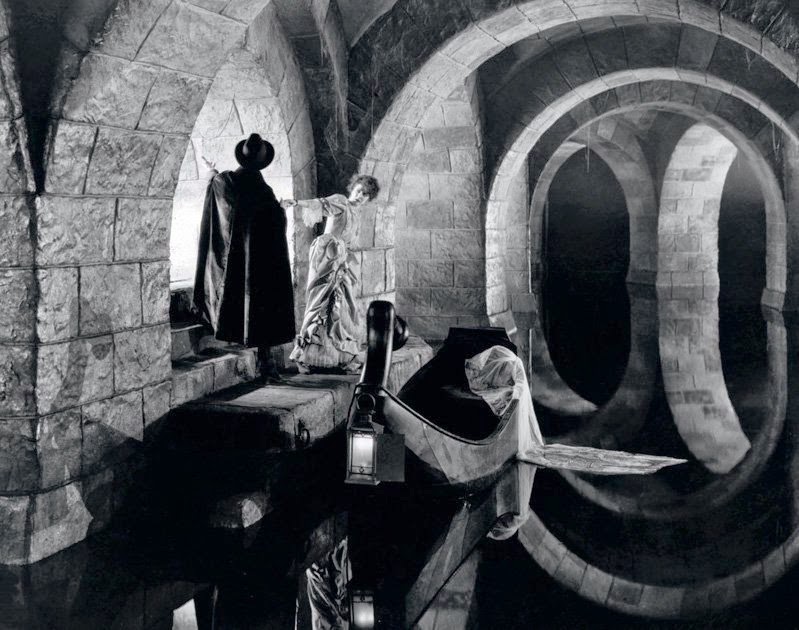 The masked Phantom takes Christine to his lair through a series of labyrinthine subbasements deep beneath the opera house.  The Phantom professes his love for Christine, but when Christine's curiosity gets the best of her and she unmasks the Phantom, she is horrified to see his disfigured face.  This is seen as an act of betrayal by the angered Phantom.  He allows Christine to escape, but only on the condition that she never sees Raoul again.  When she later attempts to meet Raoul in secret, the Phantom vows revenge! 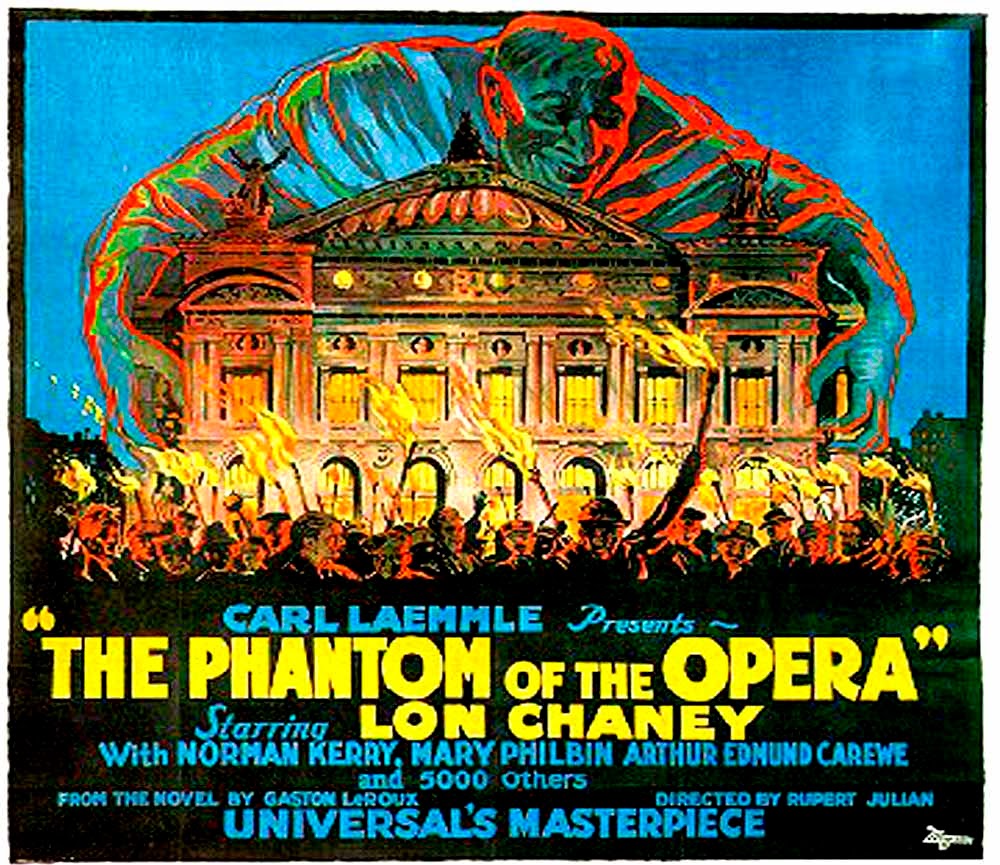 With a budget of 1 million dollars, this production proved to be just an ambitious undertaking as The Hunchback of Notre Dame.  Just as in the aforementioned film, thousands of extras were employed to portray the opera house's audience, performers, and stage hands.  However, unlike its predecessor, for this film no trick shots or matte paintings were utilized by the filmmakers to give it its epic scope.  The scale of the opera house is realistic because a practical, full five-story replica was built in Universal's back lot.  Additionally, the Phantom's subterranean lair, including an underground river, was actually constructed. 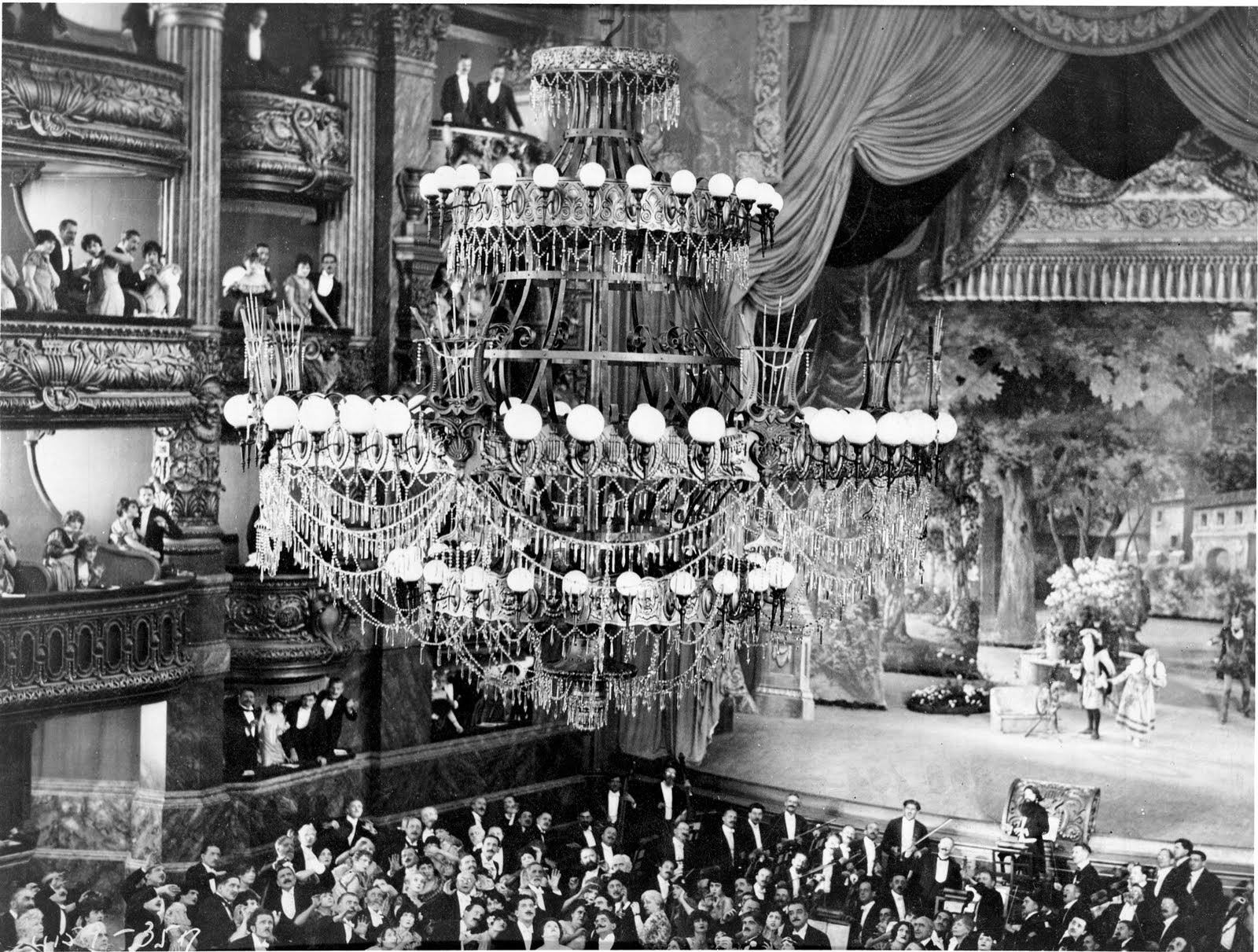 Amazingly, the scene in which the grand chandelier falls on the audience was a practical effect.  This was achieved by gently lowered the chandelier onto the extras and then filming it being reeled back up to the ceiling.  To make it look as if patrons were actually being crushed to death, the scene was played backwards. 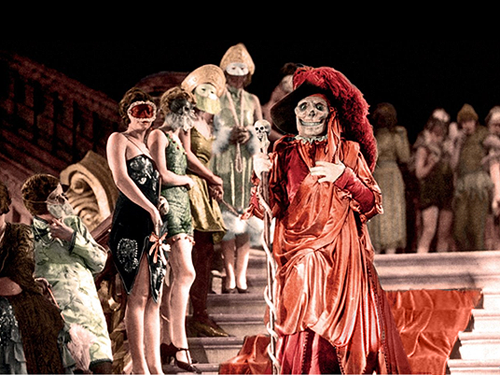 The extravagant budget also allowed some scenes to be filmed in color, utilizing the then-new method of Technicolor.  The scenes filmed in color included a masquerade ball in which the Phantom, disguised the Red Death, confronts Christine and Raoul. 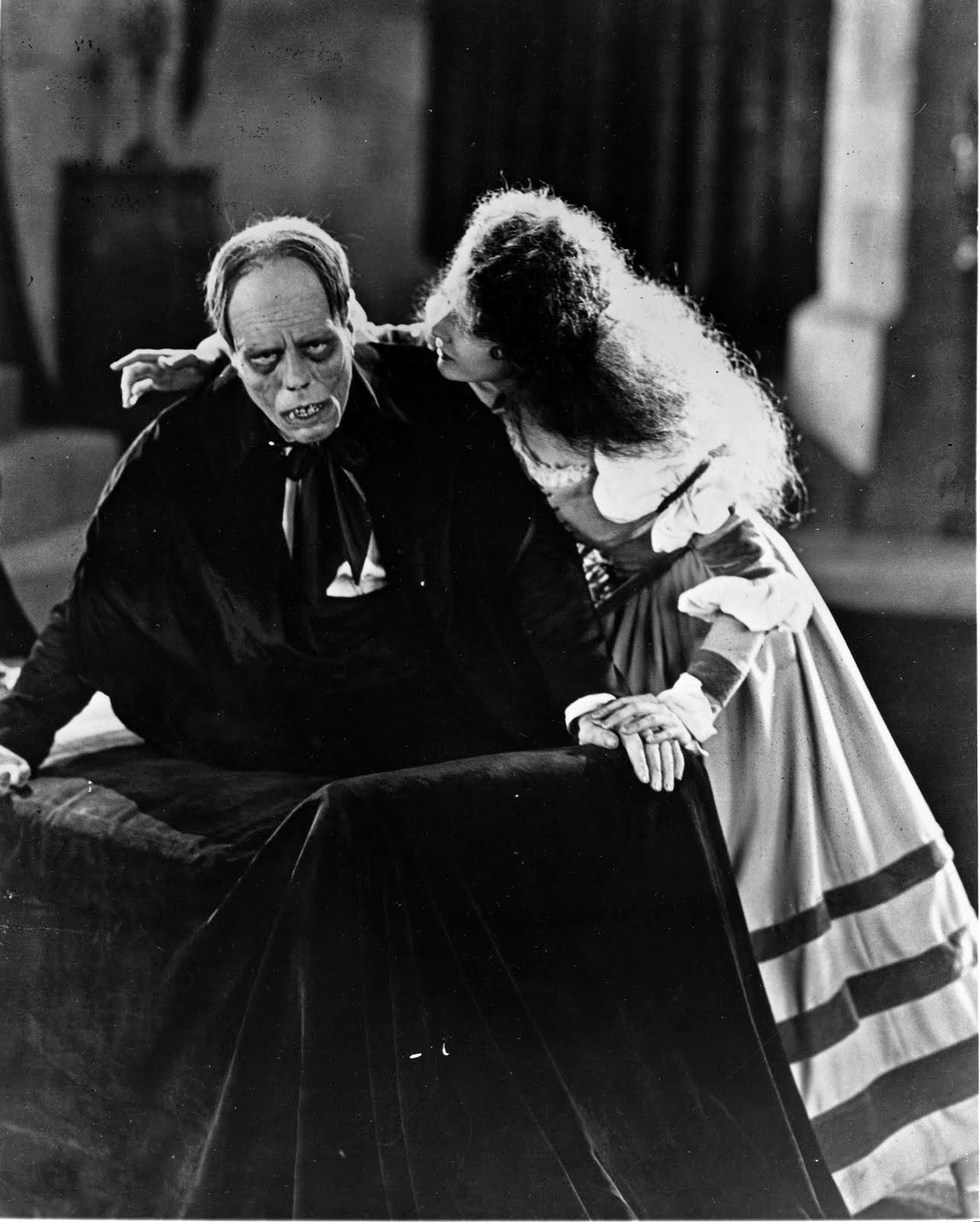 Erik, the Phantom, is an intriguing character for a number of reasons.  While there is not direct explanation for his disfigurement there are hints that lead one to believe his gruesome appearance comes from leprosy, namely the fact that he is a criminally insane escapee from Devil's Island (a real-life leper colony).  The Phantom apparently had a hand in the construction of Paris Opera House which explains its various secret passageways and his familiarity with catacombs beneath.  Erik is not only an architectural genius, but also an adept musician and a master strategist more than capable of outsmarting his opponents.  He is also described as being a "Master of Black Art".  Due to his unfortunate affliction and subsequent life of rejection and exile he has been driven mad, making him not only a figure of dread, but also a somewhat tragic, sympathetic character. 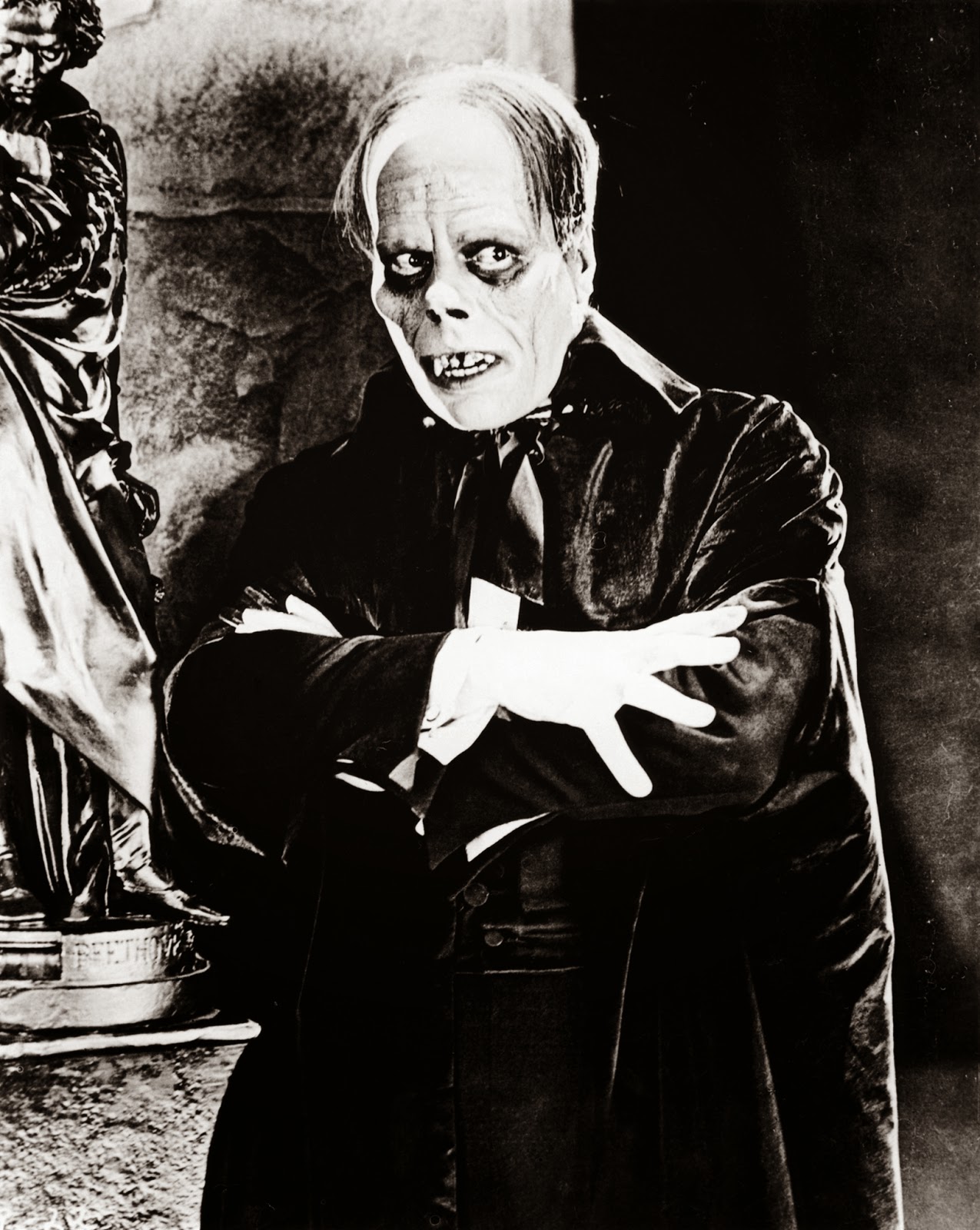 Lon Chaney took on the role of the Phantom and was once again allowed to create his own makeup and prosthetics to create the gruesome visage of the titular character.  Chaney's Phantom makeup remains a shocking sight to behold even to this day.  To create the effect of a skull-like face, Chaney wore a set of false teeth and a bald cap with wisps of greasy, black hair.  He glued his ears to the side of his head, and, using putty, exaggerated his cheekbones. He also used a piece of material to pull his nose straight up and then used wire to enlarge his nostrils which gave the appearance of not having a nose.  To complete the effect, Chaney made his eyes seem larger by strategically placing white and black paint on his lower and upper eyelids.

To increase the effectiveness of the scene of the Phantom's unmasking, the studio did not allow the public to see any pictures of Chaney wearing the makeup in advance.  This is something that was actually played up in the marketing of the film, stating that it was "too shocking" to reveal.  There actually may have been some truth to this;  It was reported that more than a few audience members audibly screamed and subsequently fainted during this scene.

The chaos depicted on screen was somewhat mirrored by some real-life turmoil on the set due to friction between Lon Chaney and the director, Rupert Julian.  Apparently the situation was so bad that the actor and director would not directly speak to one another, but depended on communication through other crew members!

In spite of all this, The Phantom of the Opera remains a classic.

Posted by Jonathan Brinson at 7:14 PM