"Hardwired... To Self Destruct" - Metallica 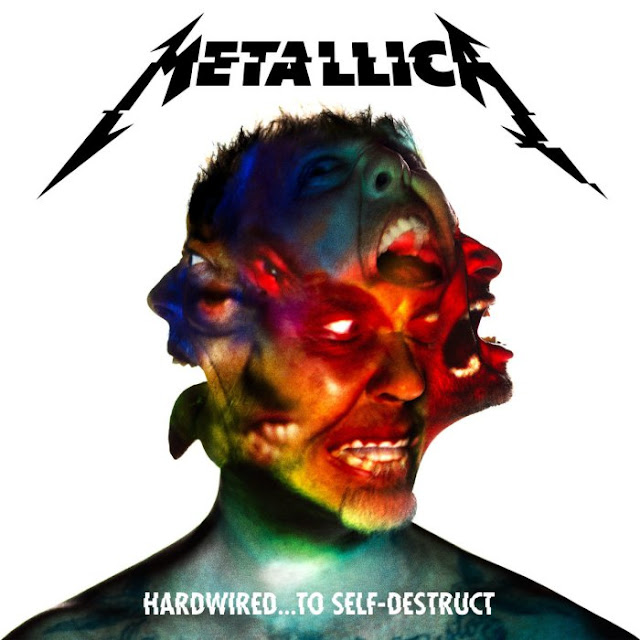 Back in November Metallica released their latest (double!) album, Hardwired... To Self-Destruct.

As with all Metallica albums since ...And Justice for All - or the self-titled "Black Album" depending who you ask - long-time fans will inevitably make comparisons usually focusing on the negative. Some of these complaints might actually be valid, but for the most part the criticisms seem to be retreads of tired arguments that the new material "isn't heavy enough" or laments over the fact that Metallica hasn't chosen to make the same album throughout their career.

Personally, I really enjoyed Hardwired.  Of course, this may not be the most reliable critique since I have a lot of nostalgic affection for the band and I've appreciated the majority of Metallica's output (obviously not counting the almost universally abhorred St. Anger and Lulu).

In some ways Metallica's most recent effort seems combines elements from the sounds that defined two very different eras of their evolution;  the bluesy licks of Load and Re-Load appear in some of the mid-tempo tracks, while on other songs the group revisits their thrash roots.  Surprisingly, the band manages to create a cohesive flow throughout the album despite the integration of these seemingly incompatible approaches!


In a most awesome means of promoting Hardwired, Metallica released a video for every song on the album!  Most of the time when a band does this, the videos are very haphazard in quality:  The concepts and quality for one or two of the videos are excellent while the remainder come off as filler.  With just a few exceptions, the band seems to have avoided this pitfall and put out some really great videos that seem to have a decent budget and creative directors behind them!

For now let's focus on just a few - which happen to feature my favorite tracks from the album!

Earlier in the post I shared the amazing video for "Now That We're Dead".  Despite the grim title, this just might be the most positive song of all time based on the lyrics.  The steady groove on this track is infectious, I can't help but tap my feet and sing a long!  The video itself seems at first to be a straightforward recording of a jam session until the lights go dark and the band is illuminated in red.  Finally, a projector casts manipulated, psychedelic images of the band members onto the live group as they play.  The effect is simple, but unsettling and effective, the same technique seems to be used on the cover for the album.


The lyrics of "Confusion" hearken back to the anti-war sentiments on full display in Metallica's "Disposable Heroes" from Master of Puppets and the classic "One" from ...And Justice for All.  The song deals with the struggle of soldiers to reintegrate into society after being steeped in bloody conflict.  The video depicts a female soldier apparently stricken with PTSD flashing back and forth between her service on the battlefield and her new occupation in a civilian setting.  The dramatic ending is heart-wrenching.


"Here Comes Revenge" sounds like it could have come from the Load era.  The song is a straight-forward analysis of revenge, personified in the lyrics.  Appropriately, the video centers on a disturbing angle on the "Big Bad Wolf" trope featuring anthropomorphized animals.  The stylized animated visuals on this one are eerie and almost endearing at the same time!


The lyrical content of "Dream No More" references the work of H.P. Lovecraft.  This isn't a first for the band who previously released songs such as "Call of Ktulu" and "The Thing That Should Not Be" on Ride the Lightning and Master of Puppets, respectively.  It's awesome to hear Metallica draw inspiration from Lovecraft once again, I got a big kick out of the fact that James Hetfield actually croons, "Cthulhu, awaken!" in the chorus!  The song is a very heavy offering, sounding at times like Sad But True with its crunchy tone and dramatic pauses.  The video is very difficult to explain, as random images are superimposed onto a silhouetted figure going about various mundane routines.  Perhaps this is what madness looks like...  How appropriate for a track influenced by Lovecraft!


The consensus among many Metallica fans - even the aforementioned critics - is that "Spit Out the Bone" might just be the most thrashy Metallica song since Kill 'em All.  The track is certainly pummeling, fast, and unapologetic in its aggressive delivery, punching you in the face from the beginning and never letting up.  The droning breakdown, multiple tempo changes, and Kirk Hammet's hypnotically frenetic solos are wonderful highlights. The lyrics describe the overtaking of humanity by technology and how it's useless to resist.  The video for is a very on-the-nose adaptation of the lyrical content, depicting an apocalyptic future in which mankind is conquered and assimilated by robotic abominations.  Featuring over-the-top performances and cheesy special effects, this video might be my favorite!

Of course, there are other notable tracks on the album, including catchy "Atlas, Rise", the anthemic "Halo on Fire", and the punishing "Murder One" which serves as a heavy-hitting tribute to Motörhead's Lemmy Kilmister.

My final thoughts on Hardwired... To Self Destruct as a whole:  If you can overlook the fact that Metallica isn't content to recycle their sound from previous albums and are willing to give it a chance, I think you'll be pleasantly surprised by the fresh energy and passion the "Four Horsemen" have put into this album!
Posted by Jonathan Brinson at 1:07 AM