The Music of John Carpenter 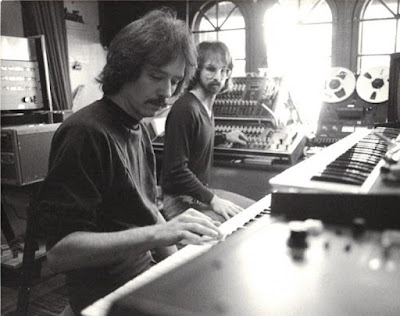 I decided to watch John Carpenter's "The Fog" again the other night.  It's probably my favorite Carpenter film aside from "The Thing".  You know me, I'm a sucker for a moody, creepy atmosphere and a good ghost story... And "The Fog" delivers both masterfully.  I ended up watching it once more the following night and realized yet again that not only is John Carpenter a brilliant director, but also an amazing composer.

Take a moment to appreciate the main theme for "The Fog"...


The music of the "The Fog" establishes an eerie mood throughout the film perfectly.  While the main theme allows Carpenter to flex his melodic muscle, the soundtrack really shines in the more subtle moments in which just a few chords are ominously played over and over.  "The Fog Rolls In" is a track that exemplifies this simple, but effective approach to music accompanying and enhancing the images on the screen.


Interestingly enough, Carpenter once admitted that earlier cuts of "The Fog" proved to not be "scary enough".  To correct this, the unsatisfied director ultimately ended up re-editing segments and shooting additional scenes to ramp up the tension (These included one of my favorite scenes, the montage of ghostly activity quietly menacing the sleeping town shortly after campfire sequence).  Carpenter also felt that the music was all wrong and ended up scrapping the original score for the film and replacing it completely.  It's abundantly apparent that he knew best... It's difficult to imagine a better soundtrack for the film!


Not long after watching "The Fog" I found myself looking up more of Carpenter's soundtrack work...

Revisiting the "Prince of Darkness" soundtrack also demonstrates the effectiveness of a stripped-down sound.


While I had never seen the film before, there are some great moments on the "In the Mouth of Madness" soundtrack...  The confusing opening, Metallica-esque track aside (and I'm saying that as a fan of the band). It's hard to believe that this was a score by Carpenter as most of the elements we associate with his soundtrack work (like the omnipresent synthesizer) are all but absent.  Being a fan of Lovecraftian Horror, "The Old Ones Return" really caught my eye (and then my ear).  It seems like I'm going to have to track down and watch this movie!


Of course, the most famous piece of Carpenter's music will always be the theme for "Halloween".  As I have discussed before, I'm not a huge fan of slasher films ("Halloween" is widely credited as being the first of this Horror sub-genre,by the way), but the main theme sets a great mood.

Earlier this year, I was excited to find that Carpenter was planning on releasing new music not associated with a particular film. The album is appropriately titled, "Lost Themes" as any of the tracks could easily accompany one of the director's early films.

"Lost Themes" is full of great moments that evoke a sense of nostalgia... despite not being directly associated with any of Carpenter's movies. It's a triumphant return to form as Carpenter's trademark keyboard and synthesizer work (occasionally joined by other instruments as well) once again serve to paint an atmospheric sonic landscape.

It's unfortunate that we likely won't see Carpenter behind the camera again any time soon, but it's a comfort to know the visionary artist is still interested in expressing himself through a familiar medium...  Who knows what that might eventually lead to?  In the meantime, here's hoping to a follow-up to "Lost Themes"!  Keep up the good work Mr. Carpenter!

Bonus Track:  It's surprising to find that John Carpenter did not create the score for "The Thing".
The simple, but haunting main theme could easily be mistaken for a bare-bones, synthesizer-enhanced Carpenter creation.  Instead, composer Ennio Morricone was employed to compose music for the film.  Morricone said that he spent a lot of time listening to and absorbing the scores of John Carpenter's earlier films in order properly to emulate his style.  He was very successful!  So successful, in fact, that fans often joke that the score for "The Thing" is the best John Carpenter score he never wrote!

Posted by Jonathan Brinson at 10:46 PM