Facing the Onslaught of Winter 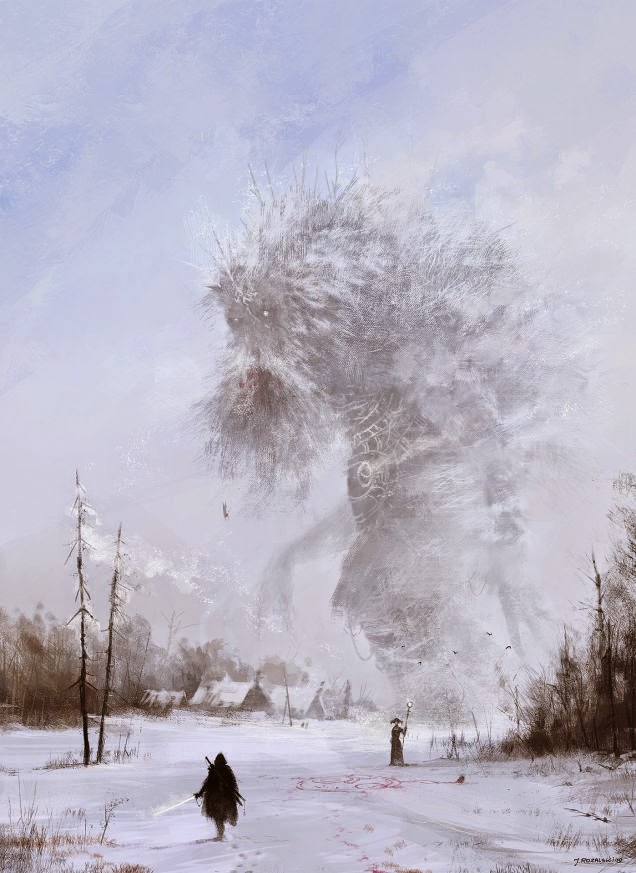 His long hunt seemingly over at last, the lone hero boldly approaches his nemesis.

Finally he will be avenged.

Sensing his presence, however, the dark sorceress slowly turns to face him.  Realizing that her power is waning and that this is likely her last stand, she begins speaking an ancient, dread incantation...  The one she had tucked away for centuries.  The one she had hoped to never actually use.

Her voice cracks as she screams the words, causing the hero to momentarily halt his advance.

Immediately after she utters the last syllable of the spell the whole landscape violently shudders.  The sky groans and creaks.

Then, just as suddenly, all falls eerily silent.

Thinking that this mist is the full, pitiful extent of his enemy's final gambit, the hero grins and once again slowly proceeds forward.

He only stops when he hears...

What sounds to be the steady cadence of impossibly huge footsteps are ominously drawing near.  The air somehow seems even colder now.

Birds scatter as the sounds come closer.  The sorceress sheds a single tear, which immediately freezes against her cheek.

Out of the fog, the sorceress' final weapon slowly reveals its massive form...

The hero's grin fades as he nearly drops his sword.

Inspired by the artwork, I decided to try my hand at some prose.  I got a little carried away.

Artwork by Jakub Rozalski.
Posted by Jonathan Brinson at 9:37 PM