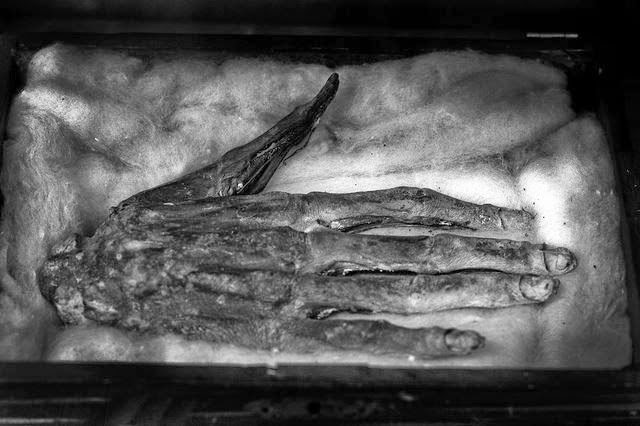 Open, lock,
To the Dead Man's knock!
Fly, bolt, and bar, and band!
Nor move, nor swerve,
Joint, muscle, or nerve,
At the spell of the Dead Man's hand!
Sleep, all who sleep! -- Wake, all who wake!
But be as the dead for the Dead Man's sake!

Now lock, nor bolt, nor bar avails,
Nor stout oak panel thick-studded with nails.
Heavy and harsh the hinges creak,
Though they had been oil'd in the course of the week.
The door opens wide as wide may be,
And there they stand,
That murderous band,
Lit by the light of the Glorious Hand,
By one! -- by two! -- by three!

Lock-pick, crowbar, lantern...  There are many tools of the trade a common thief might select for their work.  However, if the burglar were to have a background in black magic, a very unusual and gruesome addition might be included as part of their arsenal:  The Hand of Glory.

A Hand of Glory was the severed hand of a murderer who had been hanged.  Depending on which source you consult, the hand could be the left or right, but many agree that it was best to get the one that had "done the deed."   Specially prepared through an meticulously involved process of thoroughly draining the blood, drying, and finally pickling, the hand was then made into a candle using the body fat of the same hanged man, wax, and some special herbs.

This begs the question:  Why would a thief go through all of this trouble?  When lit as a candle, the Hand of Glory was said to possess magical abilities a burglar would find most useful, such as unlocking doors and immobilizing any living soul within a household.  Additionally, the wielder of a Hand of Glory was the only one able to see the light it cast, allowing them to move undetectable as long as the candle remained lit.

It is interesting to note that, some legends state that only one finger of a Hand of Glory needed to be lit, while others contend that a robber needed to be aware of the number of individuals dwelling in a house beforehand - no pun intended - and light the corresponding number of digits accordingly (It is unclear what would needed to be done if the count of occupants was to exceed five...).

Numerous German, Polish and Netherlandish legends from the 1500's and well into the 1800's describe the creation and use of such objects.  Depending on the story, a hand itself may not even be necessary; Some stories report that a foot or a mere digit such as a thumb or toe work just as well!  Even worse, however, other legends assert that parts of unborn children could be used instead.

Thankfully, if you fear that a robber might use a Hand of Glory against you, it is said that there are counter-spells that could offer some degree of protection.  If you are somehow able to avoid being enchanted to begin with and know the proper charm, you can turn the table on any would-be thieves by extinguishing their candle, thereby paralyzing the hand's possessor instead!

*  The top image is supposedly an actual Hand of Glory...

Posted by Jonathan Brinson at 10:31 PM