You might have noticed that I haven't said much about this year's Halloween display...  In years past I could hardly contain my excitement and shared updates leading up to the 31st of October on a fairly regular basis.   However, with the exhausting move my family recently went through I guess I just haven't had the energy and zest that I normally have for my various projects - this blog included, most unfortunately!

Depressing admissions aside, this year's display was probably my favorite so far for a number of reasons! 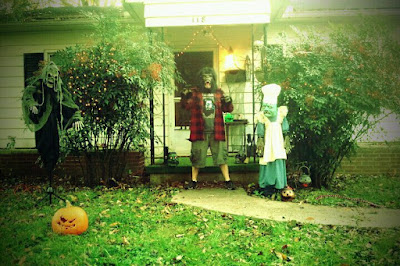 Growing up, my aunt's neighborhood was the happening place for trick-or-treating.  We lived out in the country so going from door to door during Halloween wasn't much of an option.  Meanwhile, my aunt lived in town where my sister and I could be turned loose to trick-or-treat all round the block!  It's silly looking back, but that little bit of freedom was exhilarating at the time and I still think about how awesome it was getting to experience that as a kid.

Around middle school, I was "too old" to trick-or-treat, but I was still determined to make Halloween special.  My aunt would always have me over on Halloween to hand out candy.  This is where it all started!  I found that it was just as much fun to be on the other side.  One year I dressed up as a werewolf and pretended to be a dummy and waited for older kids to reach for the candy bowl only to jump out at them and give them a good scare.  I even set up modest displays like the one pictured above with a few ramshackle props thrown together at the last minute.  Notice poor Zombie Chef on the right.

Flash-forward to this year in which we have moved into a house somewhat in the country.  As great as a situation as it is for our growing family, it's not exactly ideal for attracting droves of trick-or-treaters to enjoy a Halloween display.  But my long-suffering aunt indulged me once again and offered to allow me to take over her yard toward the end of October!

As cheesy as it sounds, I've gotta say...  It felt like coming home! 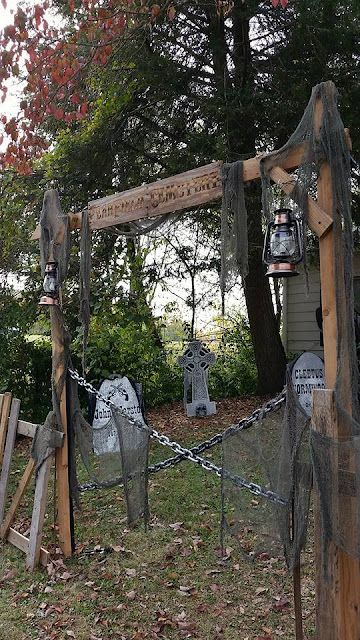 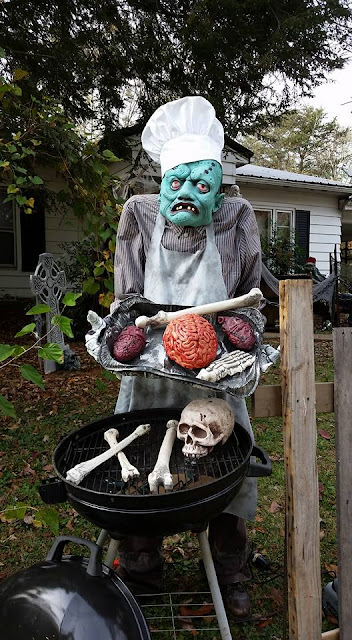 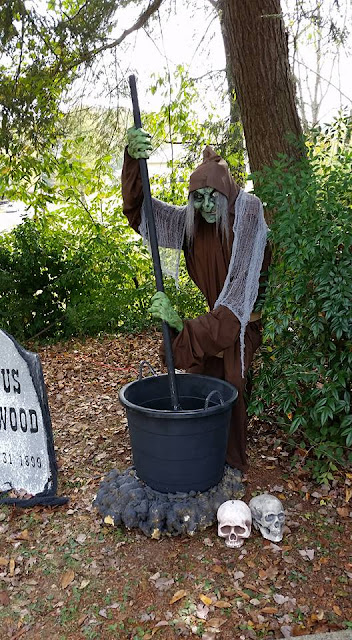 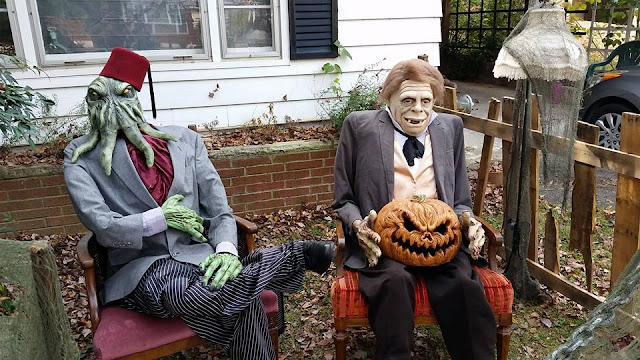 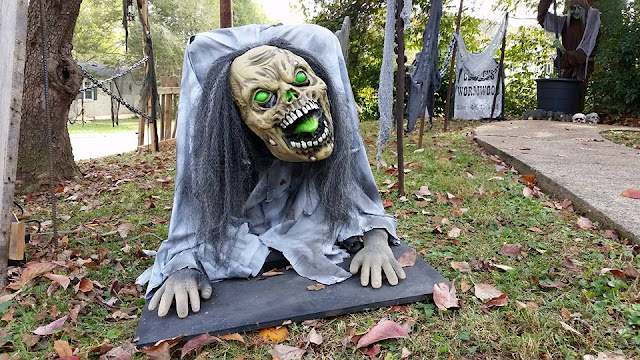 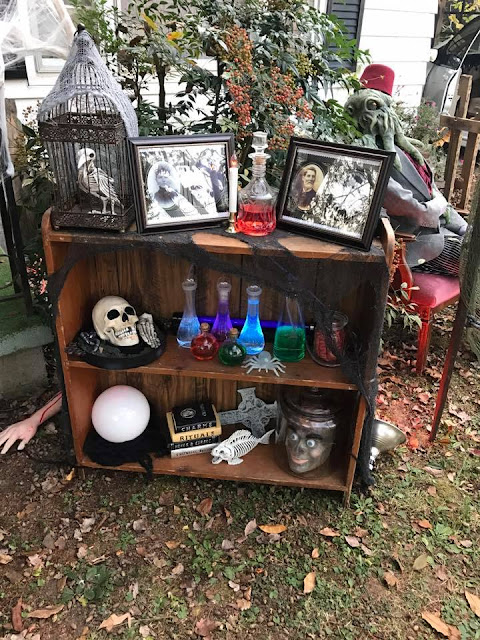 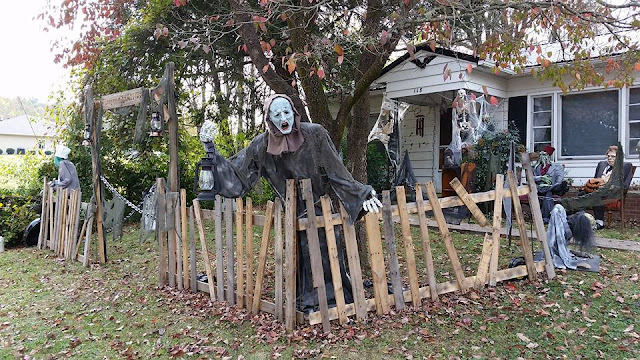 My aunt's yard is much smaller than our old yard, but I really enjoyed the new layout.

My daughter, on the other hand, did not particularly care for any of it...

This was a little sad for me, especially considering the fact that she was completely unafraid of the props when they were set up in our previous home's basement.  At least she enjoyed all of the free candy from trick-or-treating around the neighborhood!

The display looked so much more amazing at night.  Once again, I tinkered around with lighting, and think that I finally find the right balance...  Despite the annoying streetlight positioned directly next to the corner of the yard. 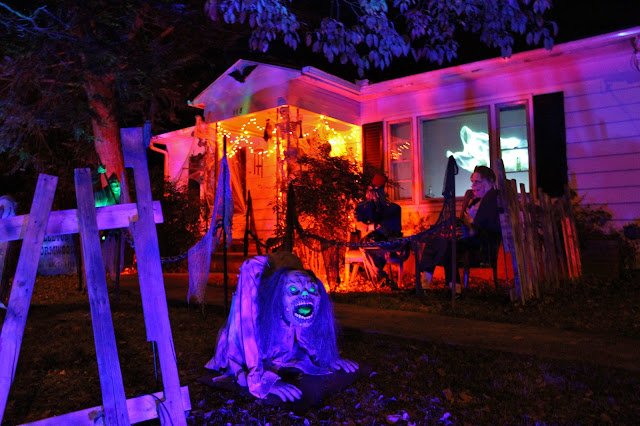 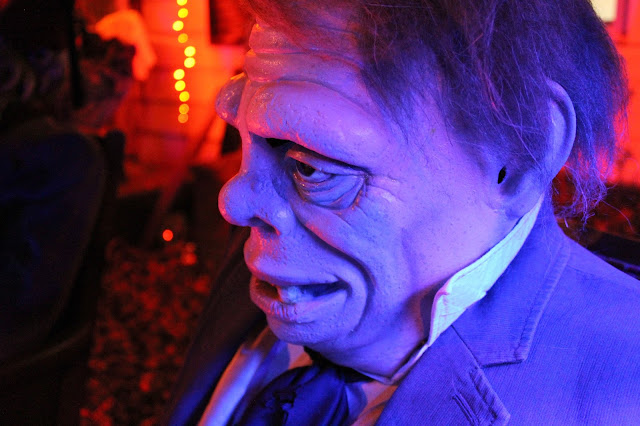 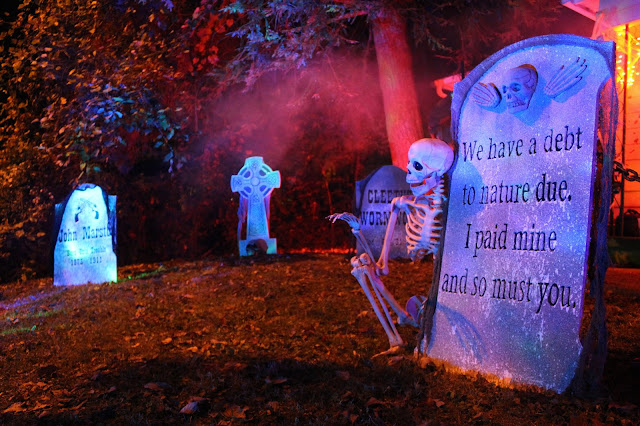 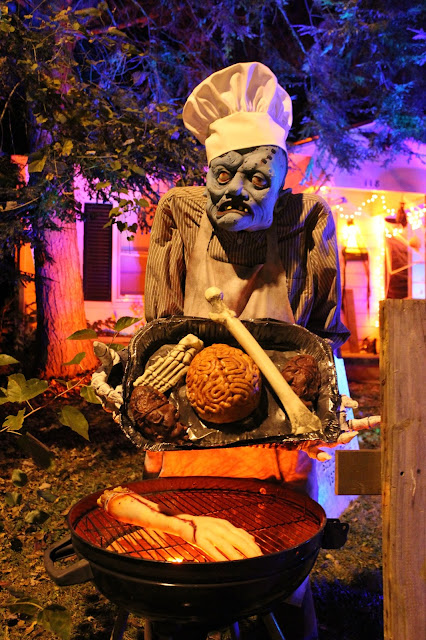 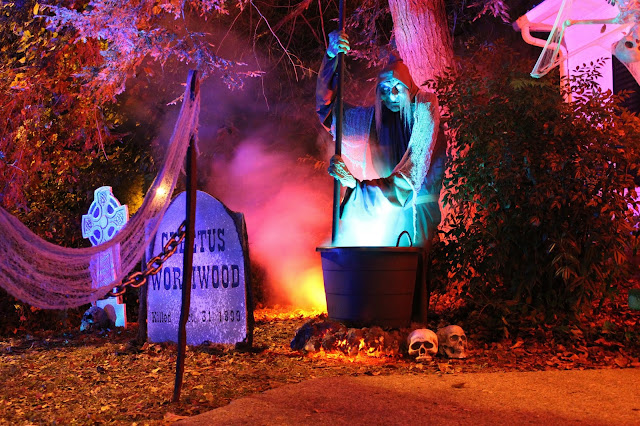 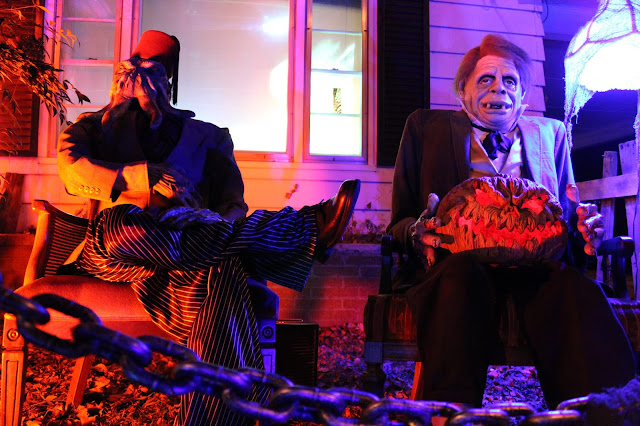 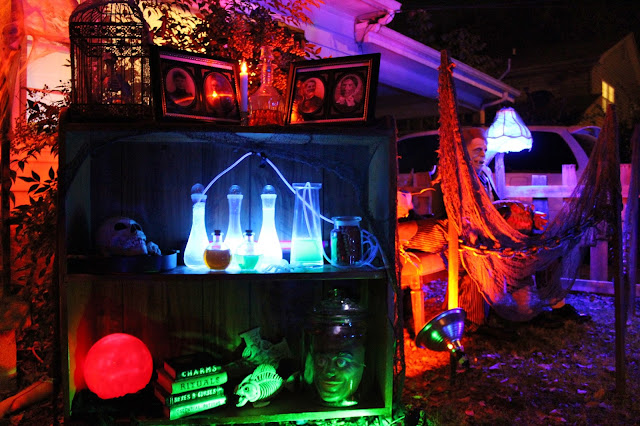 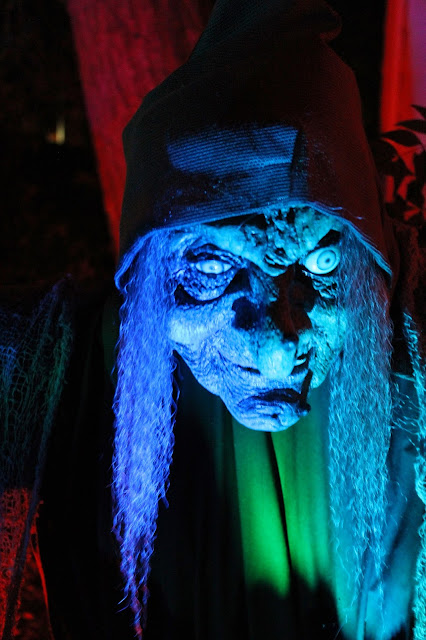 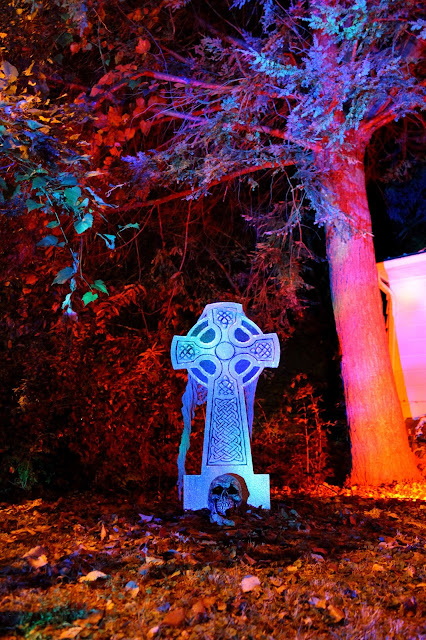 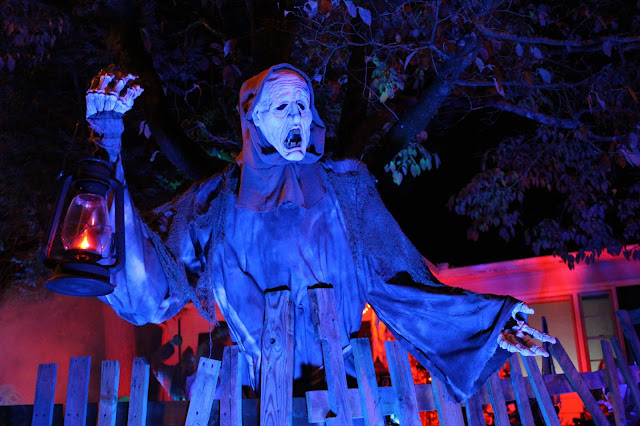 Having just moved and feeling perpetually exhausted in the weeks leading up to Halloween, my wife convinced me to not take on any new projects, but to focus instead on refining the existing props.

I did, however, try out at least one new trick...  I bought the AtmosFearFx "Phantasms" DVD and borrowed a projector with hopes of conjuring up some digital ghosts.  I first attempted to produce a hologram-like effect using a screen.  This, sadly, did not work so I tried projecting onto a shower liner mounted over the large window in the front of the house.  It worked marvelously!


The video is not the best quality, but you get the idea.  You can hear my aunt giggle with delight as she filmed the setup with her phone.  This effect turned a lot of heads.  The night we tested it we had a ton of people who drove by stop to ask what exactly was going on.

While the display turned out as good as I hoped it would, the trick-or-treater turnout was just not that great this year.  Last year we had around 300 visitors and this year it was down to 50.  I'm not sure exactly what contributed to such low numbers.

Finally, I present to you this year's Halloween display video put together by my friend Perry Wesley!


Overall, it was another great display.  I'm already making plans for next year!
Posted by Jonathan Brinson at 12:35 AM

Email ThisBlogThis!Share to TwitterShare to FacebookShare to Pinterest
Labels: Halloween, Monster Making, My Artwork, My Photography, My Projects