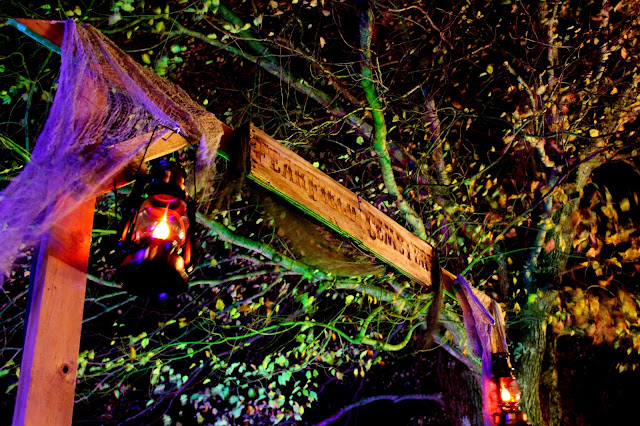 I hope everyone had a happy Halloween this year.  I'm pleased to report that ours was a smashing success!  Thankfully, the weather was cooperative enough to let us set out our entire display for the big night! 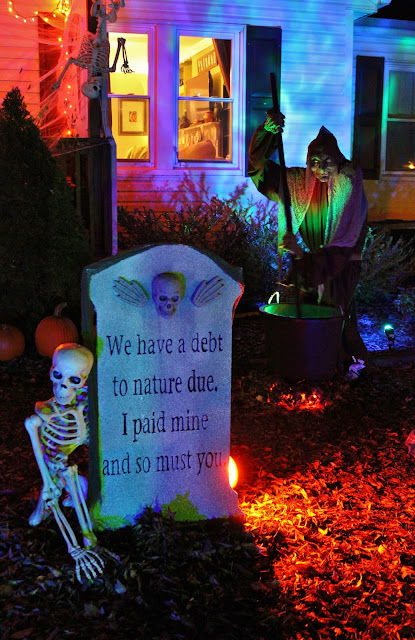 The goal for this year's display was bigger and better.  To create a more immersive atmosphere I wanted to have a graveyard with tombstones this year and enclose the whole thing in a run-down fence.  The tombstones were a bit of a challenge since I have no wood-working ability whatsoever.  Thankfully, the local technical school was kind enough to carve the graves for me...  All I had to do was send them my designs and then paint them up! The fence came together very quickly and easily using old pallet wood from a weekend dumpster-diving adventure.

Of course, one thing led to another and I ended up constructed a simple archway to go along with the fence... Which then of course had to have sign...  Which of course necessitated that the whole thing needed a name to put on the sign!  For whatever reason, the phrase "fearful symmetry" from the William Blake poem The Tyger popped into my head while I was working and I thought about how cool it would be to have a "Fearful Cemetery".  But eventually, I ended up really liking the name "FearField Cemetery" instead.  A friend with a fancy laser wood-burner created the amazing sign for the archway. 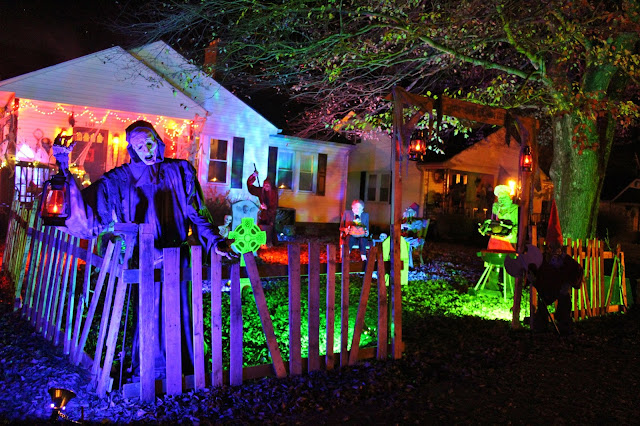 Overall, the end result is the closest to what I had envisioned all along:  A rickety old graveyard filled with monsters! 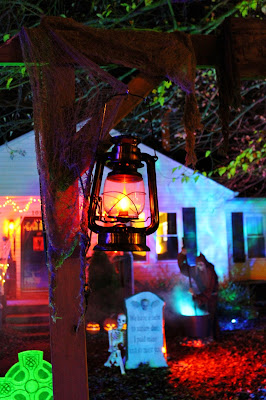 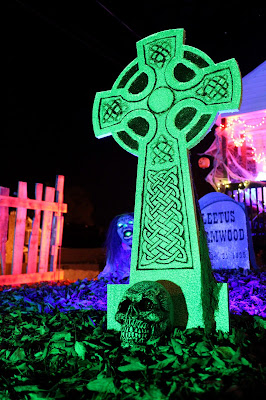 Another aspect I wanted to improve this year was the lighting.  I felt like last year's lighting was a good step in the right direction.  Rather than depend on ambient light as I had in the past, I found that the lights enhanced the props and made them really stand out against the darkness (Who would have thought?!?).  So this year I took it to another level, incorporating lights throughout the whole thing, illuminating individual props and using light sources as accents. 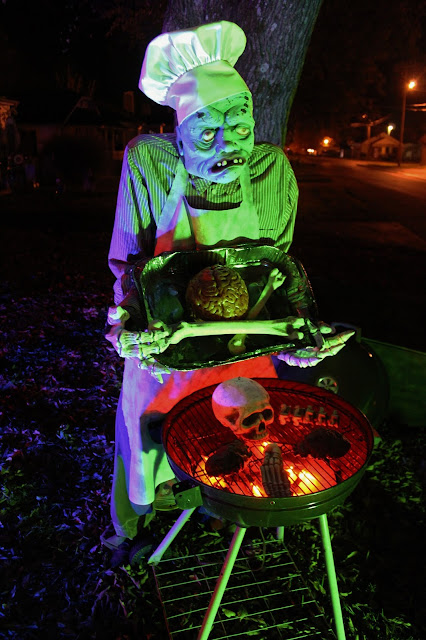 I also set out to improve older props.  Unfortunately, many had fallen into disrepair, so it was time to make improvements in those areas.  Additionally, I wanted to enhance the character of a few characters in taking them to another level.  Zombie Chef is one of my oldest props and he was always more of a zombie waiter, just holding his tray of brains and such. 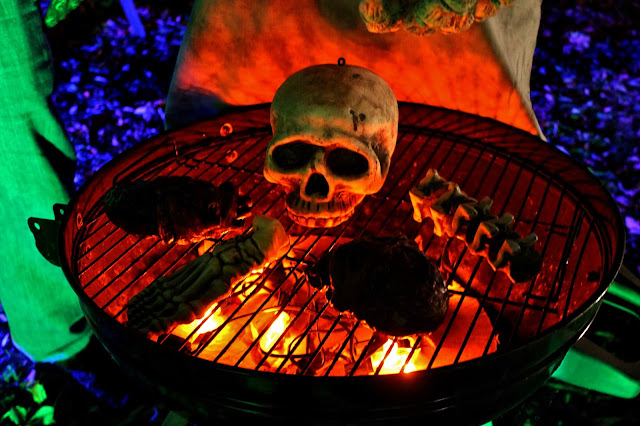 So this year I decided to give him a grill.  I didn't get to work on the grill as much as I would have liked...  I didn't add coals or a fog machine to simulate smoke, but I think it turned out alright anyway. 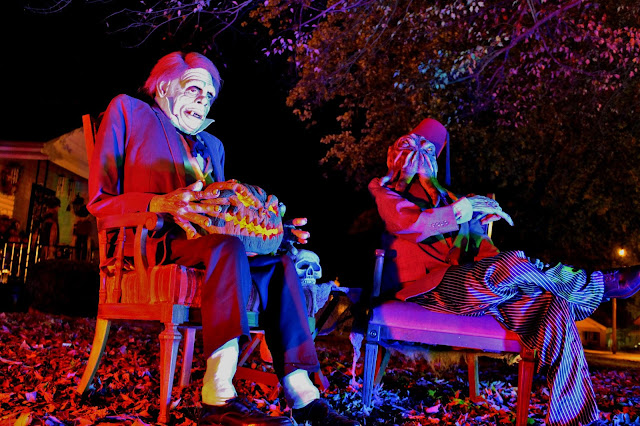 As you know, I made Cousin Eerie last year, but he was not able to make his Halloween debut due to the inclement weather.  Since he had been patiently waiting in the basement all year I decided that he needed a whimsical companion to oversee the madness of the night with. 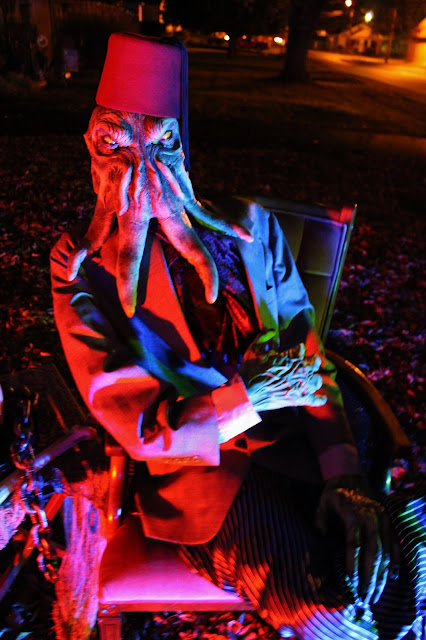 Enter: "Classy Cthulhu", this year's only new character.  My version of Cthulhu is a sophisticated, fez-wearing lounge dweller who strikes up witty conversation when he's not destroying the sanity of mere mortals. Interestingly enough, I was able to find an antique chair of the same make as Cousin Eerie's so I guess it was meant to be! 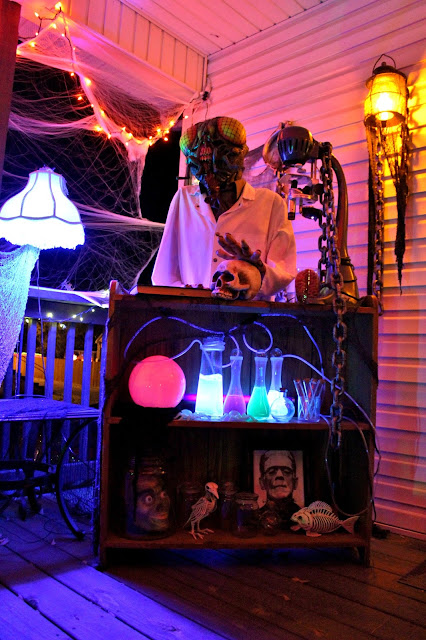 Meanwhile, Fly Guy, our resident mad scientist was all alone on the porch this year.  For whatever reason most of the kids braved the graveyard, but wouldn't venture into the lab! Fly Guy was a real sport and terrorized the best he could from his post just the same. 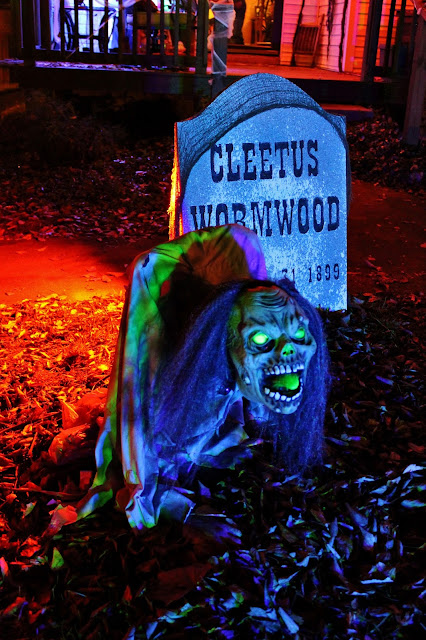 The ground-breaker Toxic Zombie now has a grave to call home and I guess a new name...  Cleetus Wormwood.  The tombstone was inspired by an award-winning DIY grave prop.  I really liked the name and it seemed to fit my character. 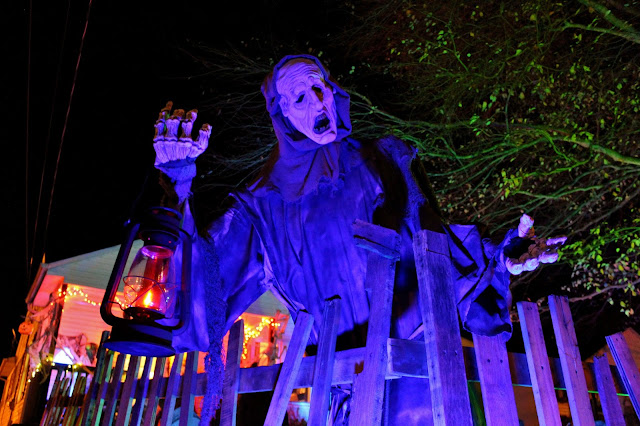 The only prop I had some trouble with was Lantern Ghoul who kept leaning over and his arm just kept falling off for some reason!  Thankfully, the arm held during Halloween and he never toppled over on anyone.  This guy will need some major repairs before next year! 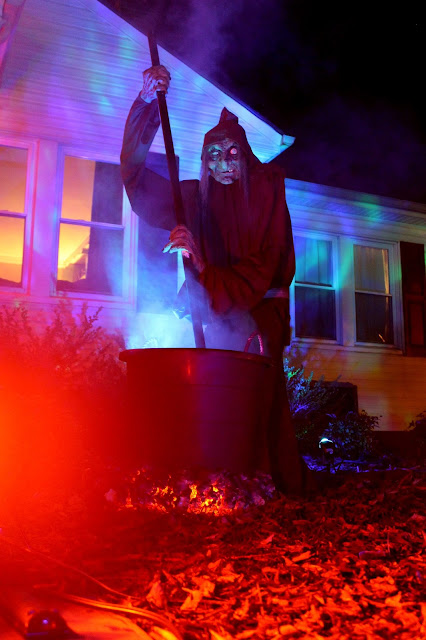 Of course Hagatha was the show-stealing fan-favorite once again.  All of the trick-or-treaters had to go check her out up-close and try to see what she was concocting in that pot... Only to be startled by the fog machine suddenly coming on as she let out a piercing cackle!

Ultimately, it was a great night!  We lost count of how many trick-or-treaters we ended up with, but I'm confident that it was well over 200.  Everyone seemed to enjoy the display.  A lot of the kids wanted pictures with the props and there were plenty of "oohs" and "aahs"...and I'm sure I overheard few "eeks" and "groans" as well.  It's great to see all of the hard work was appreciated.  I hope that in some way I have helped the kids have the opportunity to make some life-long Halloween memories.


I'm too exhausted to even begin thinking about plans for next year's display at this point...

Posted by Jonathan Brinson at 4:10 PM