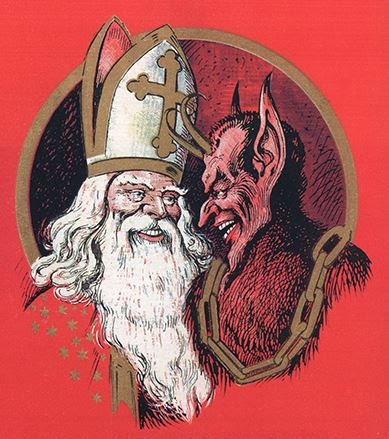 So begins the beloved Christmas song "Santa Claus is Coming to Town", but maybe it isn't Santa that children shouldn't be worried about this time of year.  Perhaps instead they should be on the look out for his malevolent counterpart, the Krampus!

Originating from German folklore, the Krampus is a malevolent demon-like creature who accompanies St. Nicholas as he makes his yearly yuletide rounds.  While St. Nicholas rewarded the good little boys and girls, the Krampus punished the bad.  Generally depicted as the black-haired, long-tongued devil beast, the Krampus would beat kids with switches and rusty chains or haul them off in sacks. 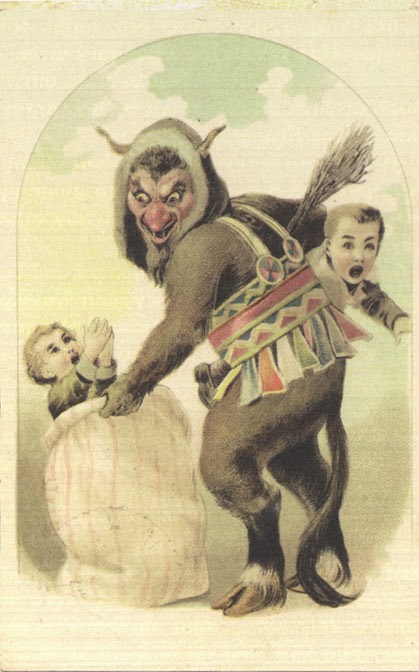 Apparently, the tradition of the Krampus goes as far back as the 1600's.  Many believe that the Krampus (and other such traditions) originated from pagan Winter Solstice celebrations that eventually found themselves incorporated into Christmas celebrations.  In Austria and other neighboring European countries it wasn't all that unusual to receive Krampus-themed greeting cards depicting scenes of the grinning demon torturing screaming kids.  Another bizarre tradition featuring the Krampus is Krampusnacht (Night of the Krampus) which is a sort of parade in which young men dressed as the Krampus and terrorized any children on the streets.


Around the 1800's the Catholic Church attempted to phase out the Krampus as part of their annual Christmas celebrations and later in the 1930's (and even into the 1950's) the Austrian government even discouraged the tradition.  In some places the beast was all but forgotten while in others it never fell out of style.  However, thanks to a resurgence in popularity (due to online curiosity and references in various pop-culture mediums) the Krampus is making something of a comeback.  Krampusnacht parades having become an alternative holiday celebration with droves of people dressing up as the Krampus and terrorizing the general public in Europe and North America.

Posted by Jonathan Brinson at 10:02 PM